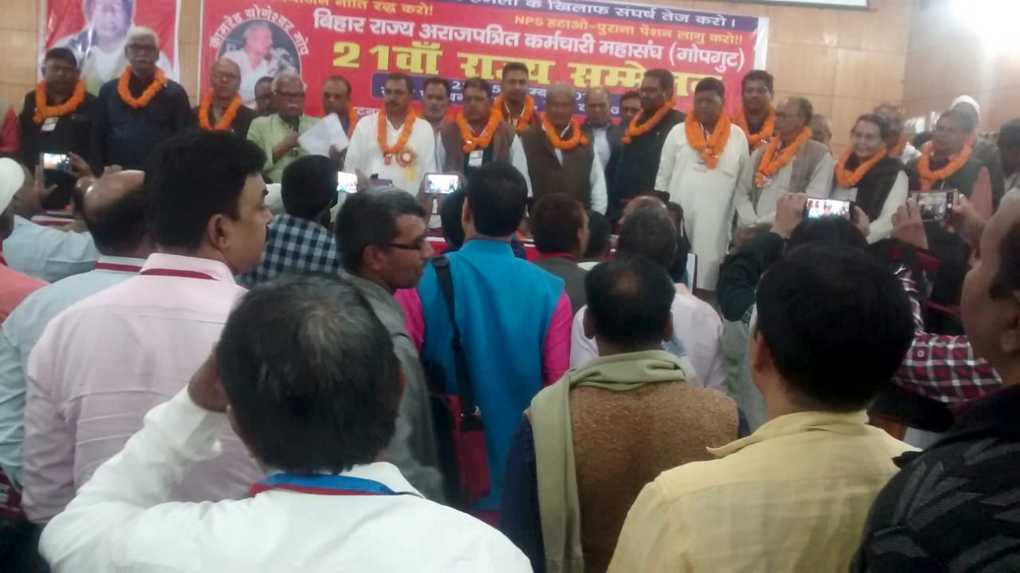 THE 21st State Conference of the Bihar Non-Gazetted Employees Mahasangh (Gope group) was held on 23-25 November 2018 at the Munshi Premchand Hall, Gaya College, Gaya with a call to make the all India workers’ general strike on 8-9 January 2019 a resounding success to fight for an end to the symbol of modern day slavery, the contract-honorarium appointment system, and for equal work for equal pay.

Prior to the conference, a massive rally was organized from the District HQ to the college premises. The entire area resonated with slogans against fascism and the anti-worker, pro-corporate policies of the Nitish and Modi governments.

The conference began with the flag hoisting by Comrade Bhagya Narayan Chaudhary and two minutes’ silence in memory of martyrs. The proceedings then started, conducted by a 6-member presidium. Comrade Shyamlal Prasad gave the welcome speech. The conference was inaugurated by AICCTU National General Secretary Rajiv Dimri, who said that the BJP-RSS government at the Centre was openly following anti-worker, anti-farmer, and anti-poor policies. He appealed to the people to make the workers’ strike on 8-9 January 2019 a resounding success and throw out this fascist government in the coming Lok Sabha elections. Class III Postal Employees Association President Shambhu Kumar and Secretary Ramanand Singh, Jharkhand State Non-Gazetted Workers Association leader Mahesh Kumar Singh, Vishwanath Singh and Shivshankar Prasad addressed the inaugural session.

General Secretary Premchand Kumar Sinha presented the annual work report and Treasurer Shatrughan Prasad Singh presented the financial accounts report at the delegates’ session. AIARLA General Secretary Dhirendra Jha inaugurated the delegates’ session on the 2nd day. He pointed out the pro-corporate and anti-poor policies and actions of the government and the undermining and gradual destruction of democratic institutions like the RBI, CBI, SC, and said that the need of the hour is to take on the challenge of throwing out the Modi government in the 2019 Lok Sabha elections.

The final day of the conference was addressed by AICCTU National Secretary Ranvijay Kumar and AICCTU National Vice President and Bihar State ASHA Workers Association President Shashi Yadav. They stressed on the need to fight for the end of the contract-honorarium-outsourcing system of appointments which are a symbol of modern day slavery.

The final session was addressed by Mahasangh Honorary President Rambali Prasad who described the difference between left wing and right wing, highlighted the 5 decades of the Mahasangh’s revolutionary Left history, and called on the people to carry forward the heritage of Yogoeshwar Gope.