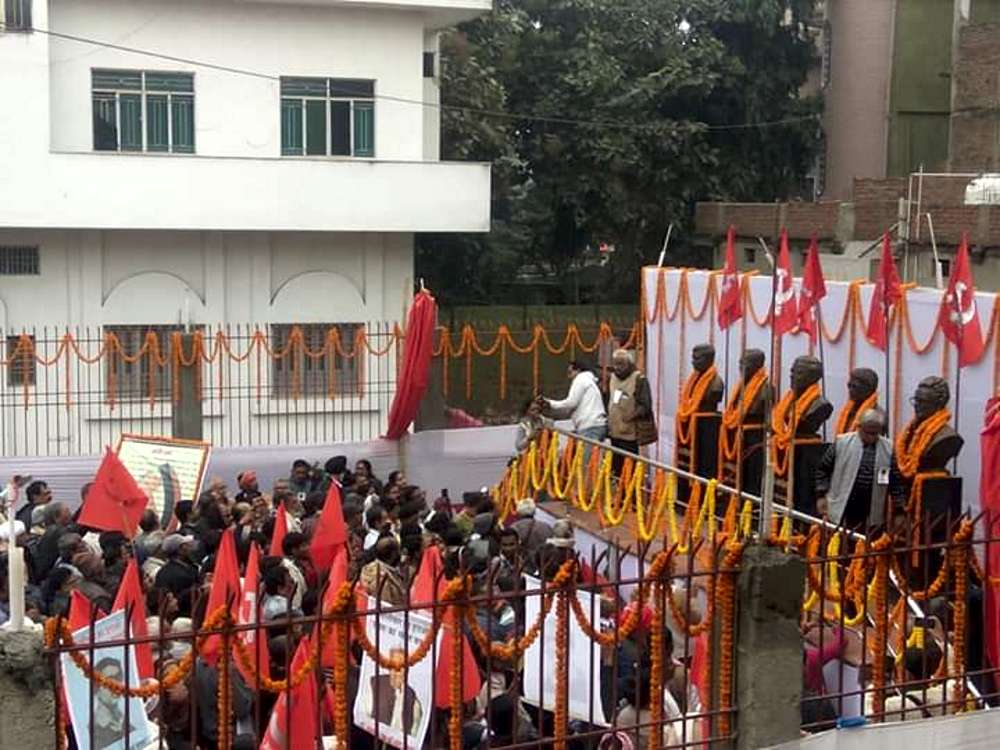 ON 18 December this year, marking the 20th anniversary of the death of Comrade Vinod Mishra, a park in Ara in memory of the Bhojpur revolutionaries was dedicated to the public. The park – named Kranti Park – includes busts of Comrades Jagdish Prasad, Rameshwar Yadav, Ram Naresh Ram, Jauhar (Subrata Dutta) and Vinod Mishra and is a memorial to the revolutionary movement that transformed the social and political landscape of Bhojpur and Bihar. It was thanks to this movement that the Dalit landless poor of Bihar asserted their right to form associations, demand wages and land, destroy feudal practices, cast their votes and elect representatives from their own revolutionary movement to Assembly and Parliament.

The Kranti Park is also a public space open and welcoming to the poorest and most oppressed people of the region. While dozens of memorials to revolutionary martyrs exist in rural Bhojpur, Kranti Park is the first public memorial of its kind in the city of Ara.

Meet Some of the Bhojpur Revolutionaries

Comrade Jagdish Prasad, immortalised by the writer Mahasweta Devi as 'Master Saheb, was a schoolteacher who became a revolutionary. His political journey began by forming a ‘Bhim Sena’ and demanding ‘Harijanistan’ - a separate nation for Dalits and the oppressed. From these beginnings he was drawn to the CPIML, the new revolutionary party born from the Naxalbari upsurge, and it was he who laid the foundation of CPIML in Bhojpur. On 17th of February 1967 Master Jagdish was brutally beaten up by zamindars for opposing their election manipulation and booth capturing against the candidature of the young Ram Naresh Ram. He resigned from his job as a schoolmaster and sought to set up CPIML in Bhojpur after this, aided by Ram Naresh Ram.

Comrade Ram Naresh Ram - Parasji as he was known – was an organic intellectual and leader of the struggles of oppressed landless peasants in Bhojpur. After he and Jagdish Prasad faced the furious backlash of the feudal forces when he decided to contest elections in 1967, they both sought out the CPIML, convinced of the need for a revolutionary Left movement to liberate the oppressed Dalit landless labourers and end exploitation and oppression. They became the architects of the CPIML in Bhojpur. Comrade Ram Naresh Ram was a Politburo member and leader of the CPI(ML)’s legislative group in the Bihar Assembly from 1995-2010. He passed away in October 2010.

Legendary figure of the Bhojpur peasants’ struggle Rameshwar Yadav was born in a middle farmer’s family at Ekwari in Sahar, Bhojpur. Known as Sadhu Ji for his brief stint as a Sadhu - an ascetic - Comrade Rameshwar Yadav was martyred in an encounter with the police at Sona Tola in Sahar on 14 Jan 1975. Rameshwar Yadav led a dacoit gang in youth because feudals were afraid of dacoits. Jailed for dacoity, he read Communist works, met Master Jagdish on his release. On Ambedkar Jayanti 1970 he determined to join CPIML, a 'party like the one in Vietnam.'

Comrade Subrat Dutt (Jauhar), was the second General Secretary of CPI(ML) from 22 April 1974 till his martyrdom on 29 November 1975. Comrade Vinod Mishra succeeded him as General Secretary, steering the party through various crucial phases including a tactical shift towards emphasising mass struggles and electoral assertion of the oppressed rural working class. 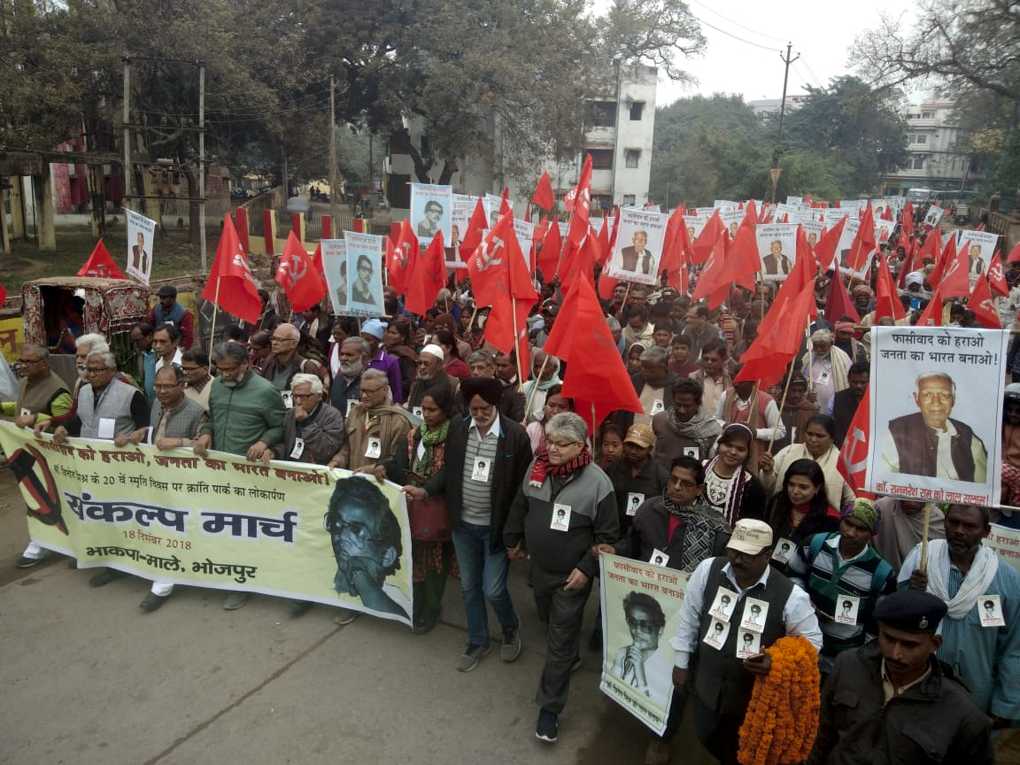 The Inauguration of Kranti Park

The day began with a Sankalp March - pledge-taking March - from the CPIML party office in Ara, close to the railway station. The March had the party General Secretary and other leaders at its head, and was full of placards with photographs of the Bhojpur revolutionaries, with the slogan 'Defeat Fascism, Unite For A People's India'. The March swelled as it winded its way through the lanes and streets of Ara, joined by people all along the way. Shops and houses lining the road were full of shopkeepers and people waving smiling and calling out greetings to the marchers. The immense affection and sense of belonging that the local people felt for the revolutionary movement of Bhojpur was palpable. Undergraduate students of Veer Kunwar Singh University, Ara formed an enthusiastic contingent of young women and men. Along with several elderly men and women, and a team of very young teenagers beating traditional drums and other instruments at the head the March, the University students showed that the revolutionary movement in Bhojpur continues to attract people of all generations including the very youngest.

Inauguration of the Park

Once the March reached the small park near the Ara Bus Stand, one could see an area of the park separated by a curtain. The rain that had been pelting down the previous day has let up, letting in warm sunshine.

Veteran Politburo member of the party Comrade Swadesh Bhattacharya, who himself has an extremely crucial and integral relationship with the Bhojpur movement that continues to this day, unfurled the red flag at a martyrs memorial flagstaff in the Kranti Park. Party GS Comrade Dipankar then pulled back the curtain and unveiled and garlanded the five busts. Politburo and Central Committee members of the party then offered floral tributes to the revolutionaries and the martyrs. Vinod Mishra's words from his Introduction to the Flaming Fields of Bihar was in the minds of many, as they thought of the Party's journey in Bhojpur:

'All the precious blood of our heroic martyrs spilled over fields & factories, hamlets & lanes, torture chambers & prison cells all over the country rose high in the sky & there appeared a red glow over Bhojpur.' 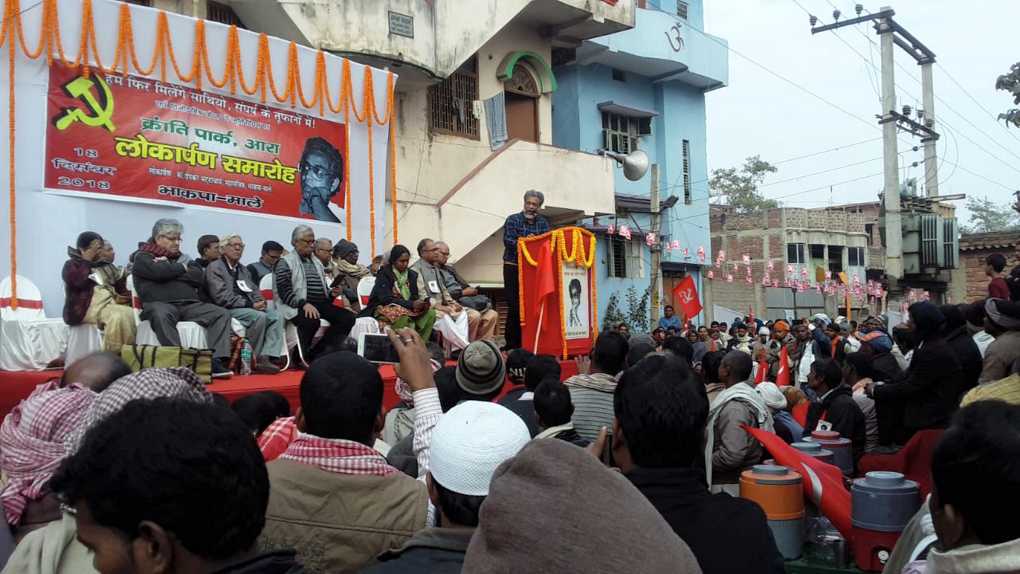 This was followed by a Sankalp Sabha - a pledge-taking Public Meeting which began with veteran CPIML leader Comrade Nand Kishor Prasad greeting and welcoming the party Central Committee members who would go on to attend a three-day CC meeting in Ara, as well as other party members, guests and local people. This was followed by a song by Hirawal in memory of the martyrs.

Comrade Dipankar then addressed the gathering. He reminded those present that the most challenging task of the present times is to oust the fascists and their allies who rule the Central Government in Delhi and the state Government in Bihar. He compared these fascist-ruled regimes to disasters, remembering how Ambedkar said a Hindu Raj would be a disaster for India. Like every disaster, the Mo-disaster calls for urgent rescue and relief efforts - centering around the news to oust the Modi regime in May 2019 - followed by rehabilitation and reconstruction efforts. He called upon people to assert the right to bread against hunger, truth against lies, peace against violence and love against hate with all their might to resist the fascist BJP and RSS. And in this struggle he said the legacy of the freedom struggles of 1857 and 1942, the Naxalbari peasant upsurge, and the Bhojpur revolutionary movement offered unique resources and strength.

Welcoming the conviction and sentencing of 1984 riots accused Sajjan Kumar by the High Court, Comrade Dipankar said that in the same way those guilty of the Babri demolition and the ensuing communal riots, the Gujarat 2002 massacre, the Bathani, Bathe, and all other carnages, and their protectors must also be removed from power and sent to jail.

Comrade Dipankar said that the clarion call of the Naxalbari movement had given a new energy and impetus to the entire communist movement in India, but the ruling classes brutally repressed that movement and thought that they had succeeded in crushing that spark of revolution. But as soon as the Naxalbari spark reached Ekwari, it was ignited and the flames started spreading. In the 70s our Bhojpur comrades gave their lives and carried our Party forward while opposing feudal oppression and brutal State repression. Bhojpur has shown the way through all critical and difficult times, whether it was the Emergency, the following phase of governments cheating the people, the difficult struggles for the right to vote in the 80s, or the revengeful phase of massacres of the poor and the working people in order to crush their political claim. Comrade Dipankar said that these 5 statues are a symbol of Bhojpur’s revolutionary heritage. The ruling class tries every ploy to make the people forget their revolutionary heritage, but the memories of the revolutionaries carry forward their heritage. He expressed the view that more such memorials and Kranti Parks should be built. Along with the memorials to Bhojpur’s revolutionary leaders, we shall also make memorials to the great leaders of the freedom struggle fought and sacrificed their entire lives for the fulfillment of their dreams of freedom and equality.

Comrade Dipankar said that this Kranti Park has been built on the strength of support and cooperation from people across the country interested in revolution and change. He expressed the hope and belief that the Kranti Park would stand as a shining example and revolutionary people of Ara would carry forward this cherished heritage.

He said the recent Assembly election results were a curtain-raiser and we must all struggle to ensure the momentum grows to oust the BJP in the Parliamentary polls of May 2019 as well.

Underlining and affirming the need for the broadest possible unity against the fascist forces, he pointed out that opportunists from the NDA camp, sensing a BJP rout, are trying to switch sides in the last minute. While he welcomed all forces wishing to join the anti BJP battle, he warned that alliances with opportunists who have for the longest time aligned with the fascist BJP, have proved brittle and fickle in Bihar itself. And so the broad alliances must be forged with the most reliable and uncompromising fighters against communal and feudal forces at their core.

This was followed by a cultural session conducted by Sudhir Suman. People's balladeer Krishna Kumar Nirmohi presented a song in memory of VM and the Bhojpur martyrs. Hirawal presented songs written by some of the best poets of the Bhojpur revolutionary movement – Ramakant 'Ramta' and Vijendra Anil. Kamta and Lalan Yadav of the Pukar team also presented a song. 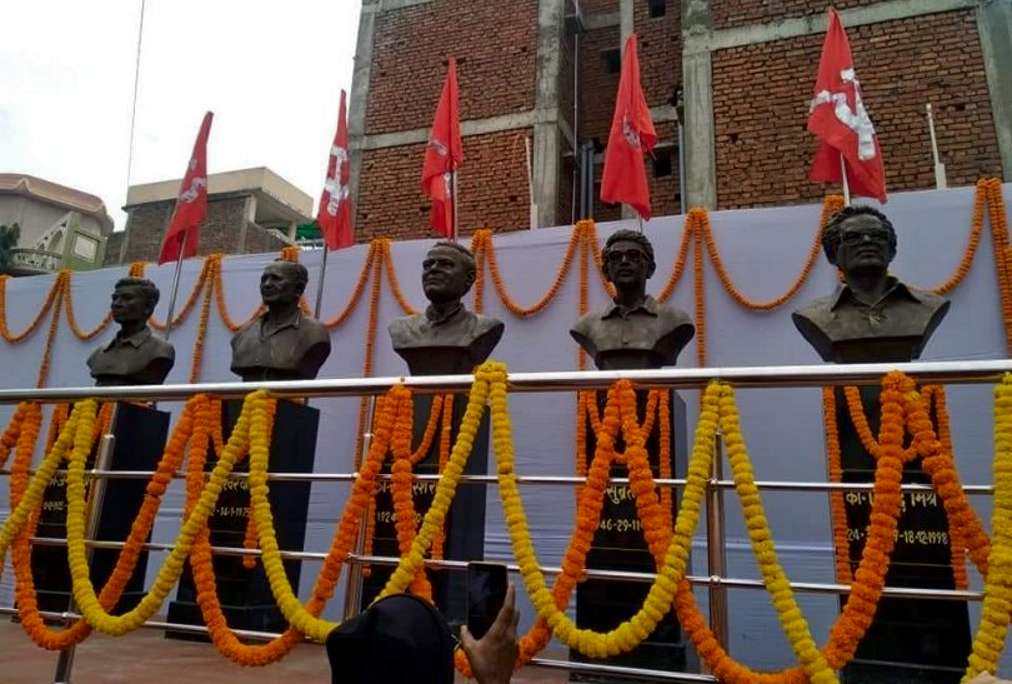