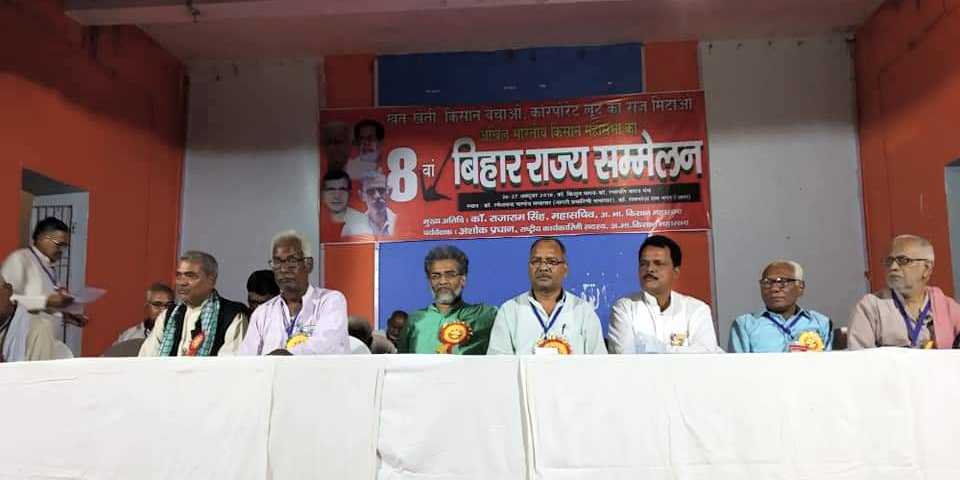 ON the occasion of the 8th death anniversary of Com. Ramnaresh Ram, architect of the Bhojpur peasants’ movement and towering figure in the struggle for social change, an ‘Oust BJP, Save the Peasant’ rally was organized in Ara on 26 October 2018 at the Com. Jagdish Master-Rameshwar Yadav Maidan (Veer Kunwar Singh Stadium). 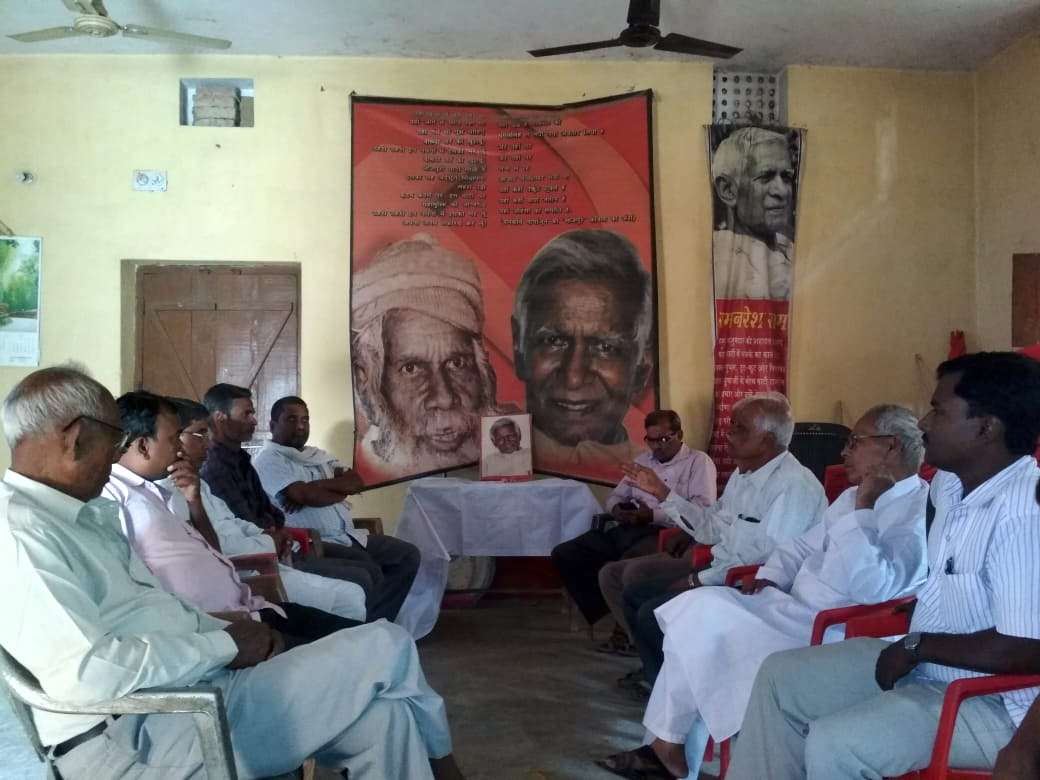 Thousands of farmers attended the rally which was addressed by CPI(ML) General Secretary Dipankar Bhattacharya, All India Kisan Sabha General Secretary Hannan Mollah, All India Kisan Sangharsh Samanvay Samiti leader Yogendra Yadav, and Kisan Mahasabha General Secretary Rajaram Singh. Prior to the rally, the leaders garlanded the statue of Com. Ramnaresh Yadav at Sahar on the banks of the Son River and pledged to wage an organized struggle against the current dispensation of pro-corporate, fascist-communal forces bent on dividing the society and selling the country.

Before the meeting at Ara started, Jan Sanskriti Manch activists presented revolutionary songs. Revolutionary poems by people’s poets like Gorakh Pandey, Ramta ji and others were also read out.

Addressing the rally, Com. Dipankar Bhattacharya said that once the people of the country understand the true face and character of this government, victory will definitely belong to the people. The BJP government at the centre considers farmers to be an obstacle in its path. Singing loudly of bullet trains, this government actually wants to crush farmers with bulldozers and bullets. Farmers’ lands are being grabbed under the excuse of bullet trains. He said that the need of the hour is to intensify opposition to the BJP to bring a political and cultural change. Farmers have always been the backbone of revolutionary struggles—whether it was the Siddho-Kanho led adivasi struggle in 1855, the 1857 freedom struggle led by Veer Kunwar Singh and his comrades, the 1942 Quit India Movement, the Tebhaga and Telengana farmers’ struggles, the Naxalbari rebellion, or the Bhojpur farmers’ struggle. The Kisan Memorial (in memory of the farmers of 1942) built by Ramnaresh Ram in Lasadhi after he became MLA, and his deep interest in the 1857 Jagdishpur ‘Balidan ko Salam’ stand witness to his optimism and hope in the struggles and strength of farmers. In his long political journey, Com. Ramnaresh Ram carried forward the heritage of these great farmers’ struggles.

Com. Dipankar said that the government which came to power in 2014 was actually a disaster for our country. Prime Minister Modi is touring foreign countries in order to clinch business deals for Adani-Ambani. This has become amply clear in the Rafale deal, which is the scam to beat all scams and in which PM Modi is directly guilty. He should be sent to jail as per the anti-corruption law of the country. But this government cares nothing for the law of the land. Today, bulldozers are not just razing down farms, fields, huts, shops and trade; they are ruthlessly razing down our democracy and our freedom. This is the reason we speak of driving out the BJP. He also said that immediate united effort is required for coping with a disaster. That is how we must view the possibility of unity among CPI(ML), RJD and other parties against the BJP. These are extremely dangerous times. A few capitalists have captured the entire country and the BJP governments are prepared to do anything for their benefit. When farmers agitate for their demands, the government says there is no money, whereas loans worth thousands of crores are being waived for capitalists. Vijay Mallya and many others have fled the country after stealing money from our banks, and this government is helping them to flee. If the law of the land works, all these people who are running away to foreign countries would be punished. 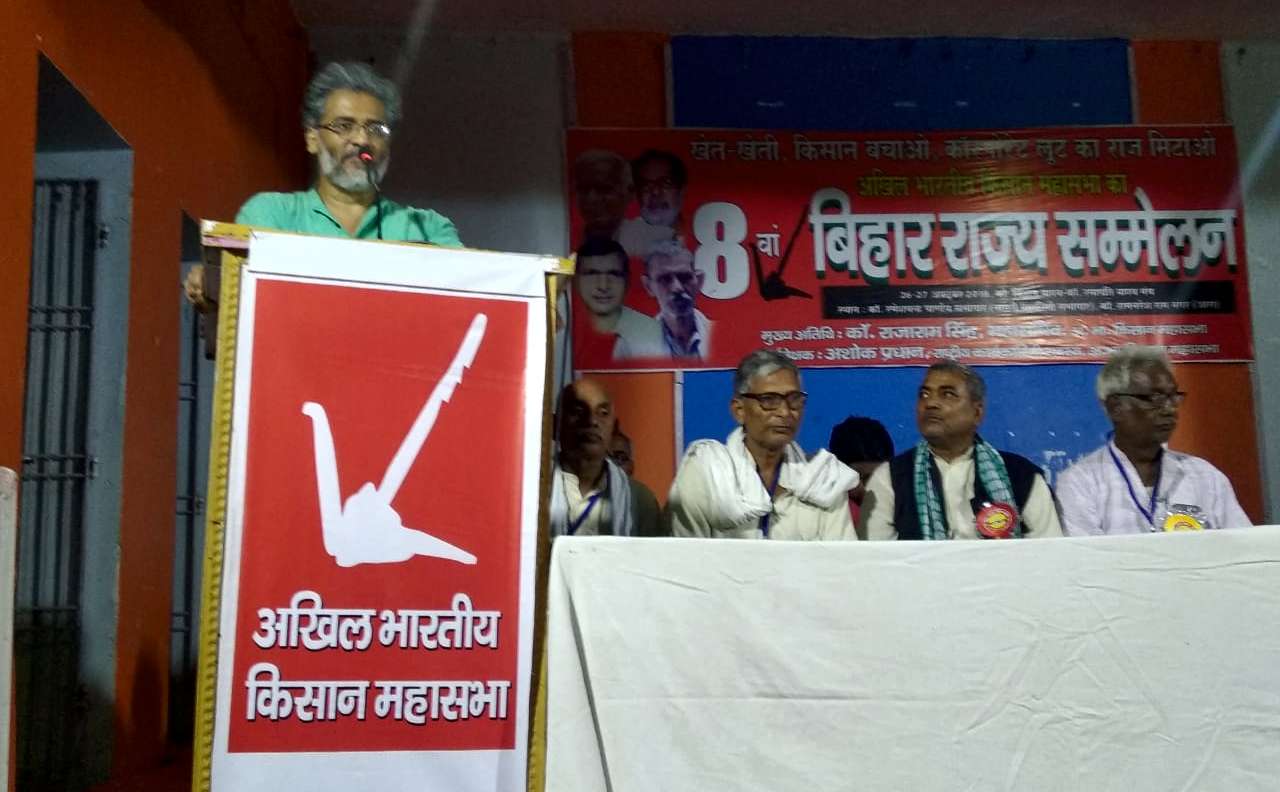 Com. Dipankar said that Bihar had already given the mandate to throw out the BJP, but NItish Kumar betrayed the people of Bihar. He joined hands and formed the government with those very people against whom he had sought the people’s mandate. It was during the JD(U)-BJP regime that liquor flowed freely in Bihar, but when Nitish Kumar returned to power, he made claims to Liquor ban. The truth is that the liquor trade is still flourishing Bihar, but thousands of poor have been jailed in the name of liquor ban. As long as the BJP government is in power, the people will never get answers to their questions on unemployment, farmers’ land, water, fertilizers, seeds, housing, children’s education, women’s safety and old age pensions. The entire country and its people are being ruined in order to benefit the BJP and its crony capitalists, while attacks on women, dalits, adivasis and minorities are increasing at an alarming rate after they came to power at the Centre. In Bihar, attacks on dalits and women have increased after the Nitish-Modi duo usurped power. This is because they are bent on turning the country into a Hindu Rashtra, a concept based on the Manusmriti. Obviously, if the country is run according to the Manusmriti, attacks on dalits and women will increase. This is why Babasaheb Ambedkar had long ago cautioned the country against the dangers of a Hindu Rashtra. Raising the issue of the year-long jailing of Bhim Army chief Chandrashekhar Ravan under the NSA, Comrade Dipankar asked if Chandrashekhar is a danger to national security because he raises the issue of dignity and respect for dalits. In what way can a country’s security be jeopardized by dignity for dalits? The truth is that the BJP-RSS is bent on dividing, breaking, and destroying the country in the name of Hindu Rashtra. It is imperative that they are driven out of power.

Com. Dipankar said that our country is not a country with a single set of beliefs and traditions. Instead, we must talk of many beliefs and traditions. It is heartening to know that the farmers understand the danger facing the country. In the last election, the BJP reaped a lot of benefit by orchestrating the Muzaffarnagar riots, but this time in the Kairana Bye-election farmers defeated their attempts at inciting communal passions through pictures of Jinnah. Farmers told them loud and clear that Ganna (sugar cane) and not Jinnah was the issue, and elected a Muslim woman candidate as their MP. He said that Jignesh Mevani and his comrades have cut the BJP’s strength by half in Gujarat; now it is the people of Bihar and the Hindi belt who will wipe out the BJP. He stressed that in the coming election such people must be elected who will raise their voice in favour of farmers’ rights.

Com. Hannan Maula said that farmers are not just facing a few problems; the entire agrarian sector is in grave crisis due to the anti-farmer policies of this government which is pro-corporate, anti-poor, and anti-Constitution. He stressed that farmers’ organizations must unite to fight and throw out this anti-farmer government. 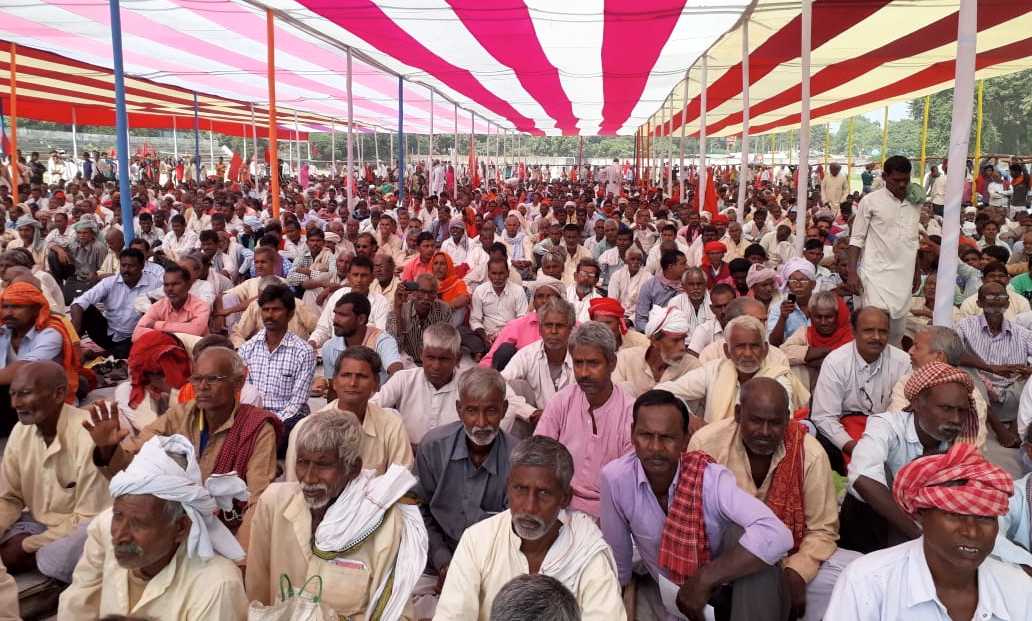 Swaraj Abhiyan leader Yogendra Yadav said that wherever farmers in the country fight for their rights, they remember the Bhojpur farmers’ movement as a symbol of farmers’ struggle. He called upon farmers to recognize the BJP’s deception, cruelty, lies, loot, and murderous character and appealed to them to unite and fight to throw out the BJP government. He said that the Modi government is the biggest enemy of farmers that the history of this country has witnessed. They have not bought farmers’ produce at the fixed MSP. They have raised the price of diesel, seeds, fertilizers, and electricity, but are propagating the falsehood that farmers’ income has doubled. This cruel government has made a profit of 470 crores for insurance companies in the name of crop insurance for farmers, which does not help farmers in any way. Farmers agitating for their rights are shot and killed, as at Mandsaur. He cautioned that the government will try to divert attention through religious polarization, but that must not be allowed. Modi has acquired the indelible stamp of being anti-farmer; no Prime Minister and no government in this country can remain in power if they are anti-farmer. They will have to go.

AIARLA President Com. Rameshwar Prasad said that the Modi government is pro-corporate and is cruelly cheating the poor, farmers, workers, and youth. They must be thrown out of power. Several other leaders attended that rally and demanded implementation of the Swaminathan Commission recommendations and appealed to the farmers to join in the protest organized by farmers’ organizations on 30-31 November in front of the Parliament in Delhi and make it a resounding success. 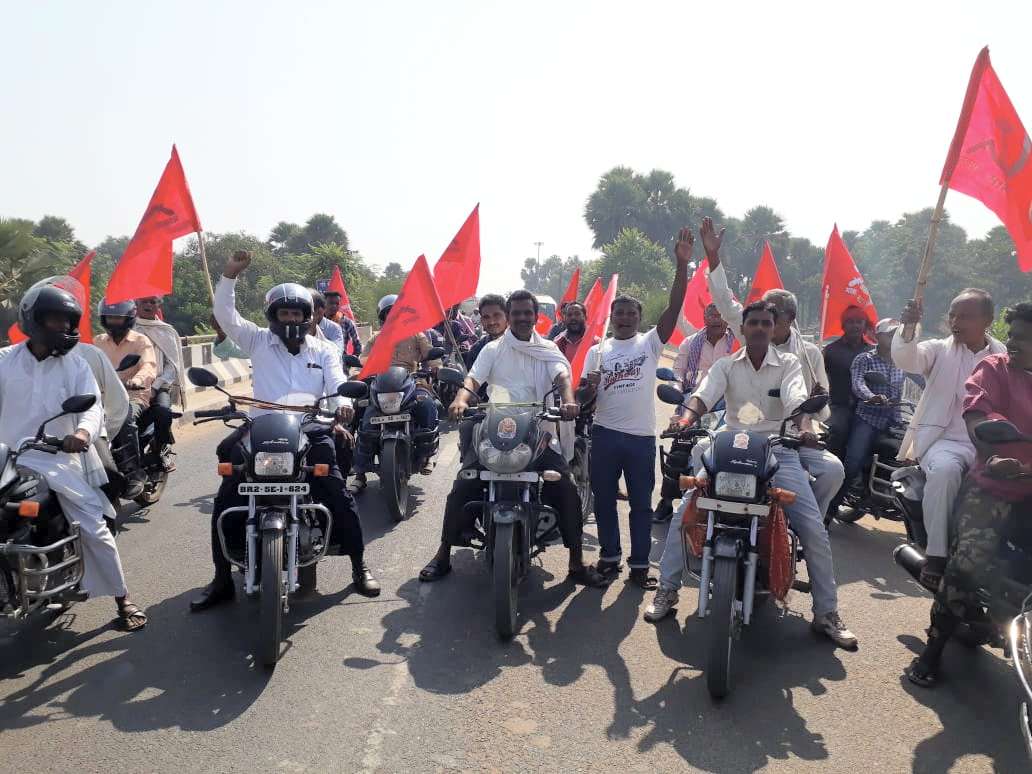 At the conclusion of the rally, Comrade Dipankar Bhattacharya inaugurated the 2-day State Conference of the All India Kisan Mahasabha at the Rameshchandra Auditorium (Nagari Pracharini Auditorium). He said that we must make farmers a central force of the class struggle; then and only then can we challenge the power of corporate capital and the politics of communal polarization. Farmers’ unity can change the society, economy and picture of the entire country. The State Conference dais was named after kisan leaders Kishun Yadav and Ramapati Yadav. After the inaugural session, the report of the outgoing committee was read, followed by discussion and suggestions from the delegates.