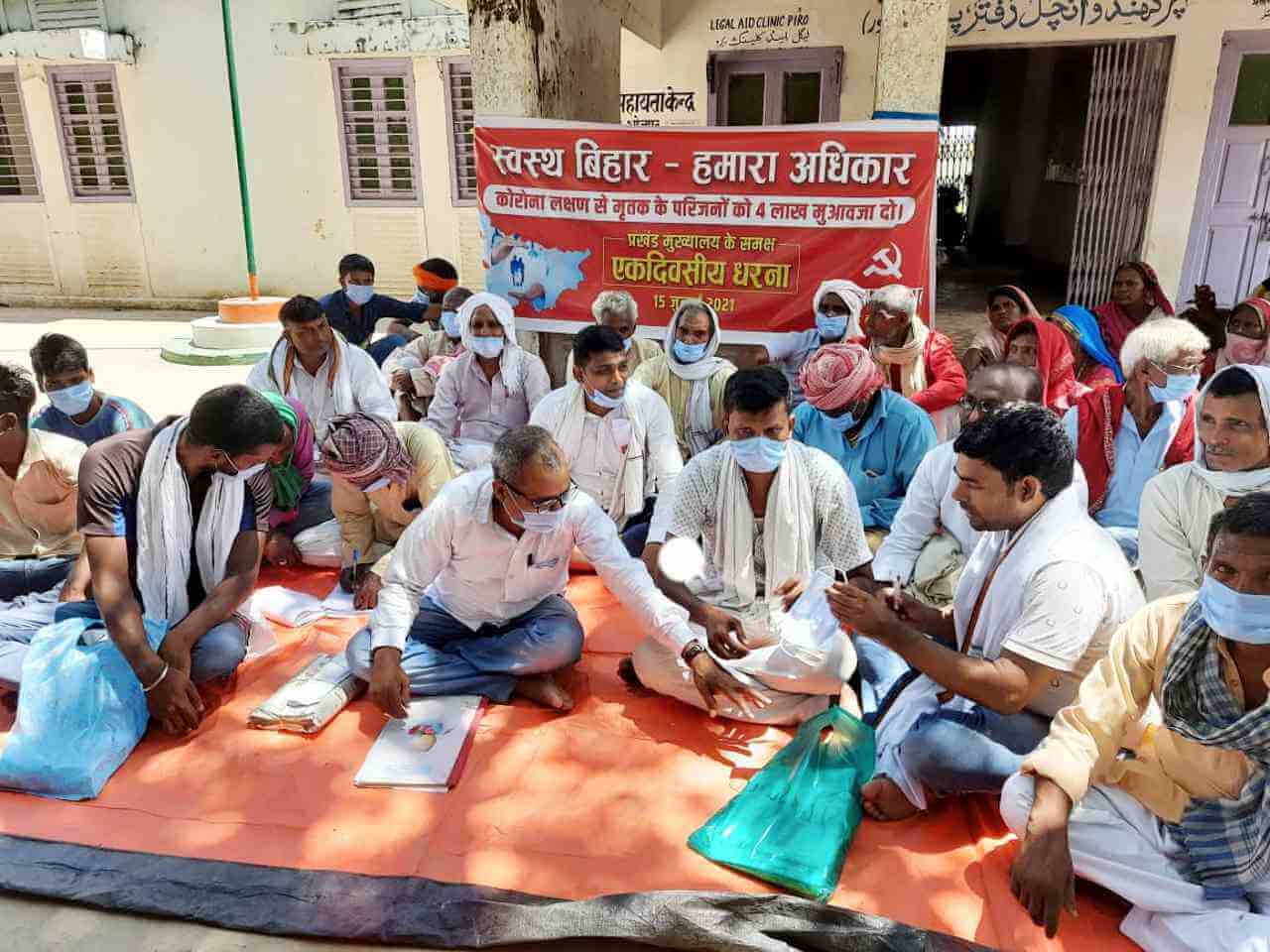 The team took cognizance of the Covid deaths that occurred in these villages from April 2021 till date, spoke to family members of the dead, recorded their statements, and made video recordings.

Speaking at a press conference in Patna, CPIML Bihar State Secretary Kunal said that the party organized Block level programs on 15 July to demand compensation for Covid victims. Collective applications for compensation will be filed at Block level. On 24 July memorandums will be submitted to in-charges of all Block level hospitals demanding improvement in hospital conditions. CPIML is organizing a long-term campaign on 'A healthy Bihar is our right' to improve health conditions in Bihar.

Applications regarding Covid death compensation were submitted under the CPIML banner on 15 July 2021 at Block HQs in Bihar, demanding Rs 4 lakhs compensation without delay for the families of every death in the Covid era. CPIML State Secretary Kunal said that the application submission program demanding compensation has been fully successful. The Bihar government should immediately take cognizance of this and arrange for the compensation amount. Covid, lockdown, and inflation have proved back-breaking for the people. This compensation amount is very important in order to enable people ruined by the 2nd wave of Covid to re-start their lives.

CPIML is collecting statistics of deaths that occurred across Bihar

It is to be noted that CPIML is collecting statistics of deaths that occurred across Bihar between 1 April and 31 May during the 2nd wave of Covid. According to this report, the actual death toll in the state is 20 to 25 times greater than the numbers shown in government data. Only a few families have received the compensation amount so far. Therefore the CPIML is getting people to submit applications for the compensation amount.

CPIML has prepared a list of all the people who died of Covid-like symptoms. Since there were no testing facilities in the villages, most of the people never got tested. CPIML MLAs and other people's representatives said that such deaths should be counted as Covid deaths and demanded compensation for them.

The CPIML legislative party also said that this matter will be raised strongly in the coming Assembly session starting on 26 July.

The meeting began with a minutes' silence for all those who died during Covid times. Leaders who spoke at the meeting said that the Modi and Nitish governments failed to provide medical treatment to the living, and are now busy hiding the count of the dead. They demanded revamping of the government health system and filling of all vacant posts of doctors, nurses and medical staff in order to cope with a likely 3rd wave of Covid.

The 'Apnon ki Yaad' ('in Memory of Loved Ones') program in Ranchi on Sunday 18 July was dedicated to the memory of Fr Stan Swamy. Fr Stan's co-workers, social activists and CPIML leaders lit candles and observed 2 minutes' silence at the party state office to pay tribute to Fr Stan and all those who lost their lives in the Covid period. Addressing the meeting in memory of Covid pandemic victims, speakers said that the central government's decrepit health system is responsible for all the deaths due to Covid, including Fr Stan Swamy's death. Privatization of health services and governmental mismanagement are mainly responsible for this. A 5-point memorandum was submitted to the Governor, demanding a judicial enquiry into the arrest of 84 year old Fr Stan Swamy and his death due to lack of life-saving facilities, and punishment for the guilty; release of all human rights and political prisoners incarcerated in jails across the country including Jharkhand; repeal of draconian laws like UAPA; and status of martyr to Fr Stan Swamy.