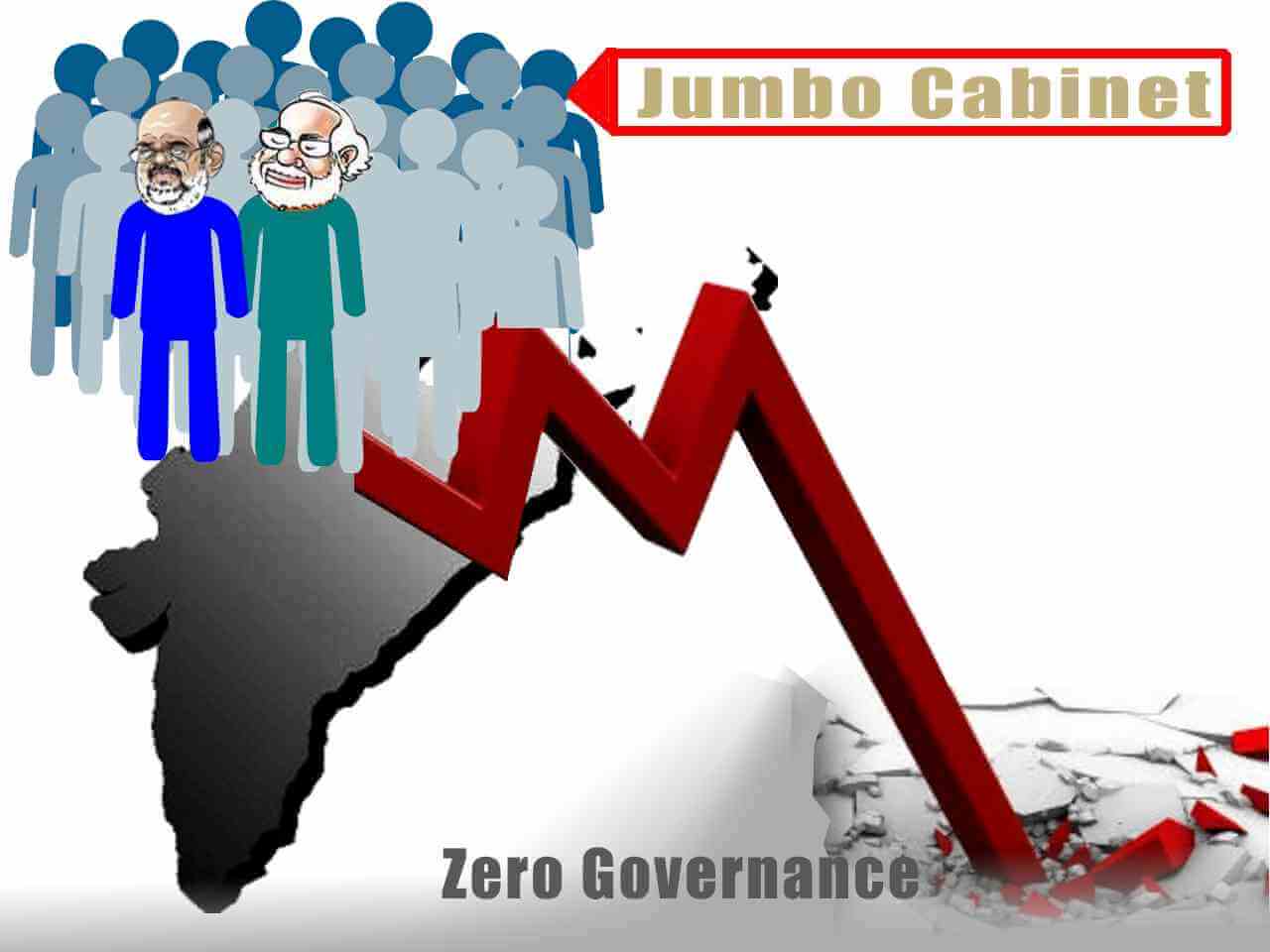 Ahead of the monsoon session of Parliament, the Modi government has effected a mega cabinet reshuffle. Several ministers resigned before the reshuffle to make room for the changes, several had their responsibilities swapped or modified, while a few others were inducted for the first time. Modi’s self-proclaimed motto of ‘minimum government, maximum governance’ is fast turning into its opposite: ‘jumbo cabinet, zero governance’!

What are the implications of this massive exercise? The key ministries affected in the reshuffle are the ones that have drawn a lot of flak in the pandemic period. Health, education, labour, environment, information and broadcasting, all key ministries have seen a change at the helm. Clearly, the government intends to give the impression that it is keen on improving its performance. Ministers who did not perform well have perished – this is the official propaganda buzz.

This mega reshuffle raises an obvious question. If all these key ministries have failed to perform in a pandemic situation, does it not amount to a failure of the total government? Should not the Prime Minister and his most important colleague, the Union Home Minister, be held primarily accountable for this failure of governance? When the engine is down, how does it help to change a few bogies? Finding new scapegoats is clearly not the answer.

Dissension is growing in the BJP in many states in the wake of the Modi government’s monumental mismanagement of the Covid19 second wave and the drubbing received by the BJP in West Bengal elections. The reshuffle is an attempt to manage this crisis. As many as seven ministers are from poll-bound Uttar Pradesh. There are new ministers from post-poll West Bengal, including a deputy for Amit Shah, where the BJP is out to overturn the people’s verdict and destabilise the state government. Many of the other ministers have also been selected with similar considerations from other states.

True to the BJP’s political character, many of the new ministers have major charges against them. Several are infamous for their irresponsible remarks. The new health minister is one who has made frivolous comments against allopathy. The most brazen choice is that of Anurag Thakur, the BJP leader who was debarred by the Election Commission from campaigning in Delhi elections for his incendiary ‘goli maro’ call. The call led to actual violence in Delhi in February taking a toll of dozens of lives. If rule of law really prevailed in India, Thakur should have been in jail. Instead he has now been rewarded with the cabinet portfolio for information and broadcasting!

The most intriguing and explosive part of the cabinet reshuffle script is the creation of a new ministry of cooperation with Amit Shah being put in charge. Agriculture and cooperation are state subjects according to the Seventh Schedule of the Constitution of India. Last year the Modi government intruded into the federal domain of the states to pass three laws to promote corporate control over agriculture triggering massive outrage and the powerful ongoing movement for the repeal of the laws. Now the government has signalled its intent to violate the federal framework once again by creating a Ministry of Cooperation under the stewardship of Amit Shah.

The move is fraught with significant economic and political messages. The cooperative sector has emerged as a powerful component of rural economy, especially in the areas of marketing and banking. The dairies, sugar cooperatives, spinning cooperatives and similar agencies of collective bargaining are driving forces of the rural economy in many states. The cooperative banks represent the credit lifeline for farmers and other sections of rural producers. The Modi government is already involved in major agricultural and banking reforms with a view to promoting corporate control over both sectors. The creation of a Union Ministry of Cooperation marks yet another step in this direction.

The cooperative sectors have been playing a key role in the socio-political dynamics of different states. With greater control from above, the BJP clearly intends to create its own power lobbies in different states to counter its growing isolation from the entire farming community and the rising unity among non-BJP ruled states in defence of the federal rights of states. Because of the chronic agrarian crisis and the economic disruption and decline caused by the protracted pandemic and lockdown situation, rural cooperatives are in a state of crisis in many areas. The cooperatives need greater participation, democratic environment and state assistance to withstand this crisis and the pressure of corporate aggression. The Modi government on the other hand is seeking yet another opportunity in the crisis to capture the cooperative sector and subject it to corporate control and the BJP’s blueprint of centralisation of more political and economic power.