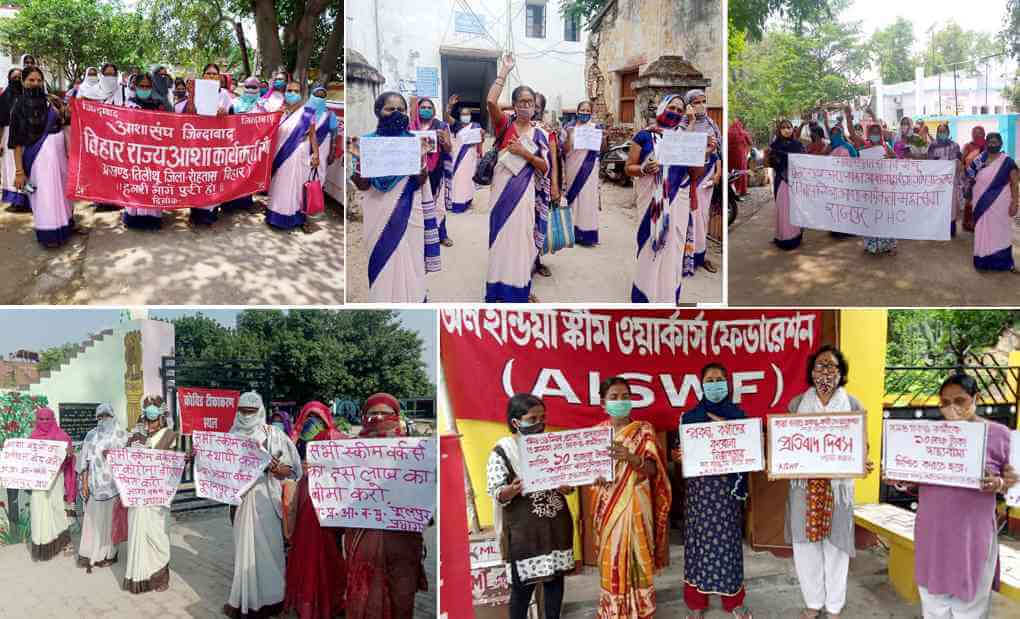 Scheme workers observed Demand Day at across all states on 31 May 2021 in response to the call given by the All India Scheme Workers Federation affiliated to AICCTU, and submitted memorandums addressed to the Prime Minister. ASHA workers said that they are being made to do Covid duty without safety equipment and are paid Rs 1000 as Corona allowance which is not enough even for rickshaw-tempo fares to move around in villages and Tolas. Anganwadi and Sewika helpers are not being given even this amount. School rasoiyas are being made to work but not given any allowance and for months they have not got even their minuscule amount, as a result of which they are on the brink of starvation.

In Bihar, Mamta workers are working directly in OT but they are also not being given any allowance. On 31 May Rasoiyas in several Districts--Nawada, Munger, Katihar, Eastern Champaran, Siwan, Patna--sat on dharna and submitted memorandums.

The above information was given by AISWF National Convener and ASHA Workers Union State President Shashi Yadav. She further said that today's countrywide movement was organized to demand Rs 10000 monthly Corona allowance, Rs 10 lakhs health insurance cover, essential safety equipment for Corona duty, and Rs 50 lakhs life insurance cover for all scheme workers. Memorandums with these demands have been submitted to the Prime Minister, Health Minister and States’ Chief Ministers.