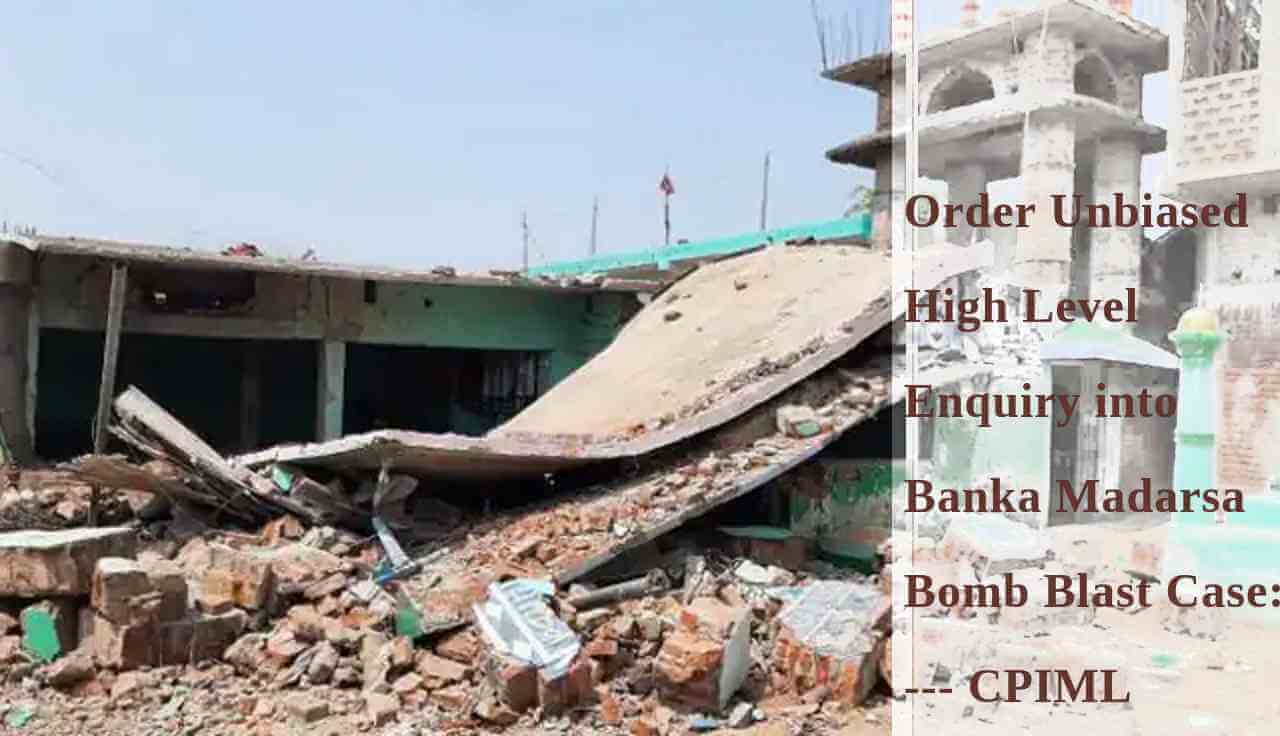 CPIML Bihar demanded a high level enquiry into the bomb blast incident that occurred in a madarsa in Banka District. CPIML Bihar State Secretary Kunal said that the Bihar government should be patient until then and keep a strict watch on forces that are spreading communal poison in the name of this incident.

He further said that the BJP, in keeping with its character, has started spreading communal hatred under pretext of this incident. BJP MLA Haribhushan Thakur and other leaders have made objectionable statements like calling madarsas 'terrorist centres'. Targeting a particular community and spreading hate and inflaming communal passions on the basis of an incident in a single madarsa, the causes of which are still unknown, is a BJP conspiracy that will never be accepted by the peace-loving people of Bihar.

BJP tries to connect every incident related to the Muslim community with terrorist activities, whereas the BJP's own terrorist connections have been exposed many times. We have witnessed the Malegaon bomb blast case, where the main accused Pragya Singh Thakur was given a ticket and sent to the Lok Sabha by BJP. After the statement by J&K DSP Davinder Singh, proof has been found of BJP leader Tariq Ahmed Mir has connections with terrorists. Only recently, 51 crude bombs were found near the BJP office in Kolkata. Even earlier, bombs have been found there many times. Thus, thousands of evidences gave been found for BJP leaders' terrorist connections.

Comrade Kunal said that there is no need for an NIA probe into this incident. The area police have not acknowledged any kind of terrorist connection. The government should constitute a high level committee and conduct a free and fair enquiry into the matter.

A CPIML team led by party State Committee member SK Sharma visited the site of the incident on 12 June.

The team said that on the basis of their talks with the local people the statement and observations made by the District administration appear to be correct. This appears to be an ordinary kind of incident, which BJP people are deliberately portraying as 'terrorist connection'. The enquiry team feels that the Bihar government should order a high level enquiry into the incident; there is no need for any kind of NIA probe.

Navtolia village is a very ordinary village. Its residents are labourers and sharecroppers. There were reports of some people being injured in the blast, but there is no talk of this in the entire area. Therefore it looks as if this was a rumour based on hearsay. At present there was no sign of any tense situation in the area.

Our demand is that the Bihar government should keep a strict watch over forces attempting to spread communal tension and rumours under pretext of this incident. It is totally wrong to connect this incident with terrorism. BJP people want to disrupt communal harmony and further their divisive agenda by giving this incident a wrong direction.