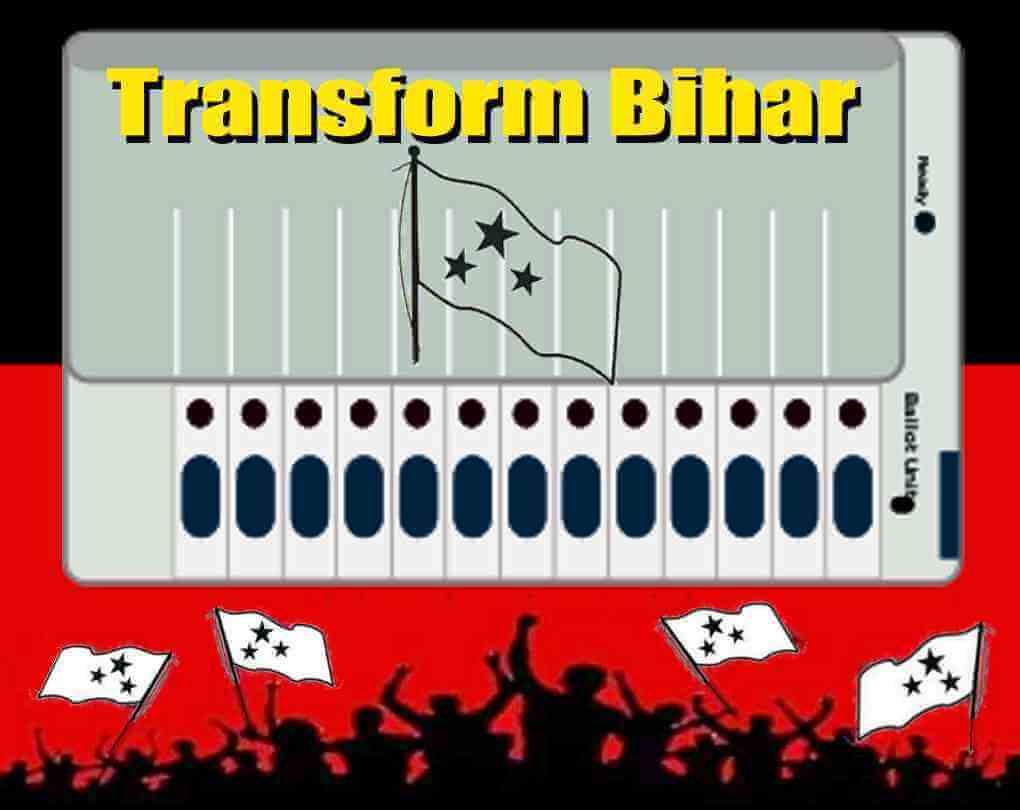 The forthcoming elections to the Assembly of Bihar are taking place in the shadow of the Covid-19 epidemic with major restrictions on election campaigning and gatherings of people. Huge parts of Bihar are still reeling under floods. Bihar will be the first state in India to undertake a major electoral exercise amid such restrictions. We had requested the Election Commission of India to schedule the polls keeping this abnormal situation in mind so the participation of the people did not get adversely affected. The EC has however announced the dates as per the regular schedule. We appeal to the people to ensure their energetic participation while observing necessary Covid-19 precautions and regulations.

Development and good governance are still loudly proclaimed as the guiding goals of the Nitish Kumar government, but these goals have been starkly delinked from the fundamental premise of democracy and now these much touted phrases have turned into empty rhetoric or a cruel joke much the same way as Modi's 'achchhe din'. The 2015 elections had given an emphatic mandate for a non-BJP government, but the BJP’s limitless lust for power and total control coupled with the unabashed political opportunism of Nitish Kumar made a complete mockery of that mandate and meted out an unprecedented insult to the electorate. The power-grabbing machinations of the BJP have now even split its own coalition with the LJP moving out of the coalition and dozens of BJP leaders taking the LJP route to take on the JDU.

The governance model of Nitish Kumar has all along been dominated by the bureaucracy with little role for elected people’s representatives on various levels and absolutely no respect for the legitimate demands and agitations of different sections of the people. Over the years this bureaucracy-centric arrangement has turned increasingly arbitrary and dubious, with cliques calling the shots in many departments and regions, and officers not toeing the line being harassed and victimized for not being loyal to dominant leaders and interests. The fabled 'sushasan' of Nitish Kumar is now marked by scams like Srijan, horrific state-led crimes like the Muzaffarpur shelter home rapes and murders of girls and riots across the state from Chhapra and Madhepura to Aurangabad and Jahanabad.

The BJP, which has been steadily increasing its penetration and tightening its grip by using Nitish Kumar as its face, is now desperate to appropriate all power for itself. Concentration and centralization of power has emerged as the hallmark of the Modi regime. And the power it is amassing is being used entirely for the benefit of the Adani-Ambani empire at the cost of India’s farmers and workers and the common people. Nitish Kumar has waxed eloquent about getting special state status for Bihar, but the Modi government has been systematically demolishing India’s federalism. A constitutionally recognized special state like Jammu and Kashmir has in fact been stripped of not just its special status but its very statehood and reduced to two Union Territories. The rhetoric of cooperative federalism can no longer camouflage the bulldozer of coercive centralization. Looking at the Narendra Modi and Nitish Kumar regimes we can well rephrase the famous saying ‘absolute power corrupts absolutely’: ‘with absolute power comes absolute arrogance and absolute aggression’. The ‘double engine’ government which is bulldozing Bihar must now be voted out.

In the 1970s, Bihar was a key battleground for democracy. The 1974 student movement mentored by Jayaprakash Narayan played a big role in reclaiming democracy and ending the Emergency regime. In the early 1990s, Bihar again led the battle for social justice and secularism against the feudal-communal aggression of the Sangh brigade. Today Bihar will again have to pool all its strength, energy and resolve to stop Modi’s fascist bulldozer, save the Constitution, reclaim democracy and win the rights of the people. CPI(ML) in Bihar arose as the party of the most oppressed and marginalized sections of Bihari society, and has since its inception five decades ago continued to brave feudal violence and state repression to hold high the banner of democracy, dignity and social transformation. CPI(ML) MLAs in Bihar Assembly have been tireless in their campaign for justice and people’s rights. At this critical political juncture in the history of Bihar and India, CPI(ML) is determined to pour all its energies into strengthening the emerging broad-based unity against the fascist offensive of the Modi government and the Sanghi conspiracy to hijack Bihar and turn it into a laboratory for feudal-communal-patriarchal violence, bigotry and hate as it is doing in neighbouring Uttar Pradesh.

Despite tall claims of economic growth and infrastructural development, Bihar still remains trapped in chronic poverty, persistent economic backwardness and abysmally weak public education and public health facilities. The pain suffered by millions of migrant workers and students of Bihar in the lockdown has revealed before the whole world the reality of jobless growth and the continuing migration of workers and students in search of better employment and education opportunities. The agenda of development in Bihar cannot be reduced to an assortment of sundry schemes that do not even impact the surface and shy away from addressing the roots of any major and persistent problem. The agenda of development must be firmly anchored in the context of people’s empowerment and social transformation and guided by the constitutional commitments of justice, liberty, equality and fraternity. With this forward-looking vision of hope and change, CPI(ML) presents its 2020 poll manifesto as a charter of the party’s enduring commitment to a better deal for the people of Bihar.