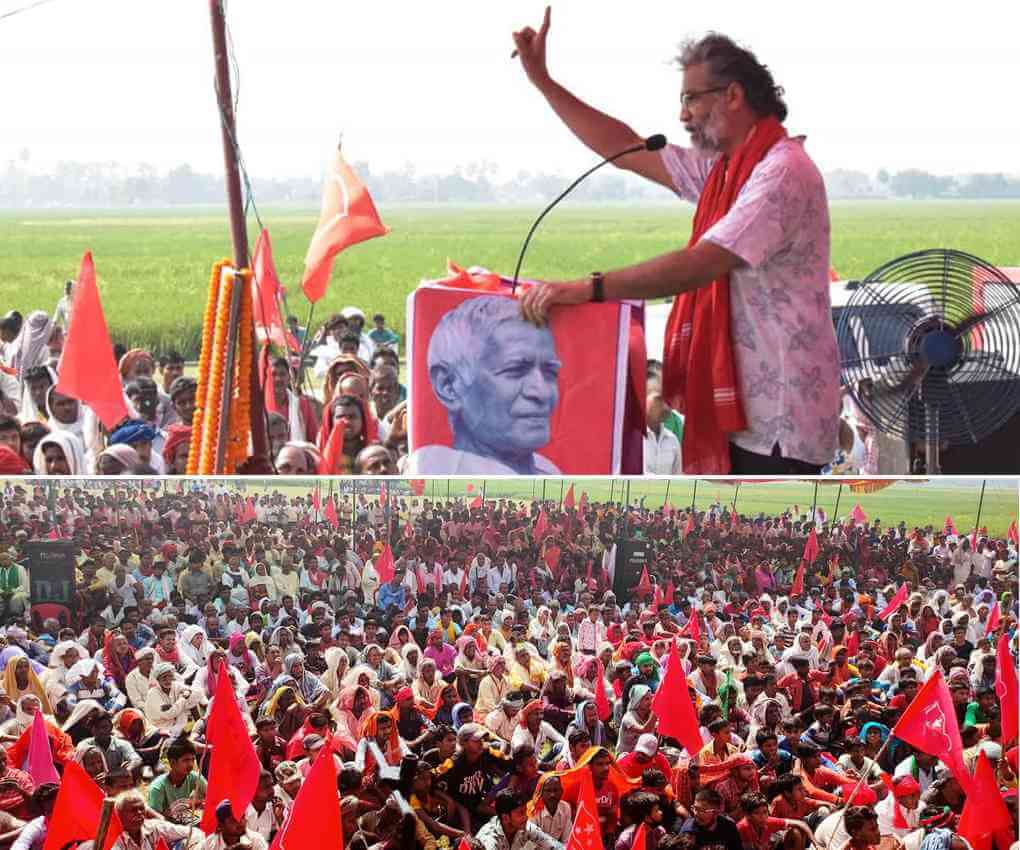 CPIML observed 26 October as renowned Communist movement leader and former Sahar MLA Ram Naresh Ram’s Memorial Day, as Samajik Parivartan and Sankalp Diwas (Social Change and Pledge Day). On this occasion a memorial meeting was held at Ekwari village in Sahar of Bhojpur in Bihar. Thousands of people remembered their beloved comrade and pledged to carry forward his dream of complete social transformation of society through relentless struggles of the oppressed sections of society. The party General Secretary Dipankar Bhattacharya, Politburo member Swadesh Bhattacharya, Bihar State Secretary Kunal, Kavita Krishnan, Amar, Sudama Prasad, Raju Yadav and other leaders garlanded the statue of Ram Naresh Ram on the banks of Sone river before the meeting in Ekvari.

Addressing the meeting, Dipankar Bhattacharya said that the struggle started in Ekvari by Master Jagdish, Rameshwar Yadav and Ram Naresh Ram achieved the right to vote and dignity and respect for the people of Bhojpur and Bihar. Today Comrade Ram Naresh Ram’s party CPIML is carrying on a struggle across the country to save democracy and the Constitution, for the right of the poor to education, employment, health and power. It is the legacy of CPIML and Ram Naresh Ram which is behind the anger evinced against Nitish Kumar and Narendra Modi and the awakening of youth, poor, workers, farmers and women. Comrade Ram Naresh was the epitome of the ideal Communist MLA. It was his dream that the downtrodden should emerge as a force to reckon with, and the realization of this dream is visible in Bihar today. We are entering a new era. People are filled with a new enthusiasm and energy and are confident that there will be a strong CPIML presence in the Assembly where they will work for them.

Comrade Dipankar further said that Nitish Kumar and BJP thought that they could steal the mandate under the guise of these Corona and Lockdown times, taking advantage of the people’s distress. But the people have united strongly in favor of the Mahagathbandhan and CPIML and will ensure their victory.

Comrade Ram Naresh Ram was remembered and honored in many villages of Bhojpur on his 10th memorial day, including Kranti Park at Ara, and a pledge was taken for social and political change and to carry forward the legacy of his struggle.

On 26 October, the last day for campaigning for the first phase, election meetings were organized at Ekvari in Tarari and Pavna in Agiaon. The meeting in Tarari was addressed by General Secretary Dipankar Bhattacharya, Kavita Krishnan, Raju Yadav, Upendra Paswan, Lal Bihari Yadav, Upendra Yadav and other leaders and presided over by Ramkumar Yadav. Comrade Dipankar said that this election is clearly a movement for change. BJP is feudal pro-corporate party and its A and B teams are roaming around Tarari campaigning, but the revolutionary soil of Tarari-Sahar will not allow them to succeed.

Addressing the meeting at Pavna, Comrade Dipankar said that this time the election agenda has been set by the people and the issues are education, employment, health and rising prices. The insult and injury offered to the poor during the pandemic and Lockdown will be decisively answered by throwing out this cruel and insensitive government. The meeting was addressed by candidate Manoj Manzil, Kavita Krishnan, Chandradeep Singh and Raju Yadav. Present on the dais were Comrade Swadesh Bhattacharya, State Secretary Kunal, Amar, Santosh Sahar, Jawahar Lal Singh, Ravi Rai, Om Prasad, people’s poet Nirmohi, Naveen Kumar, RJD leaders Nand Kumar Yadav, Mohd rafi, Vimal Yadav and Nirmal Yadav.