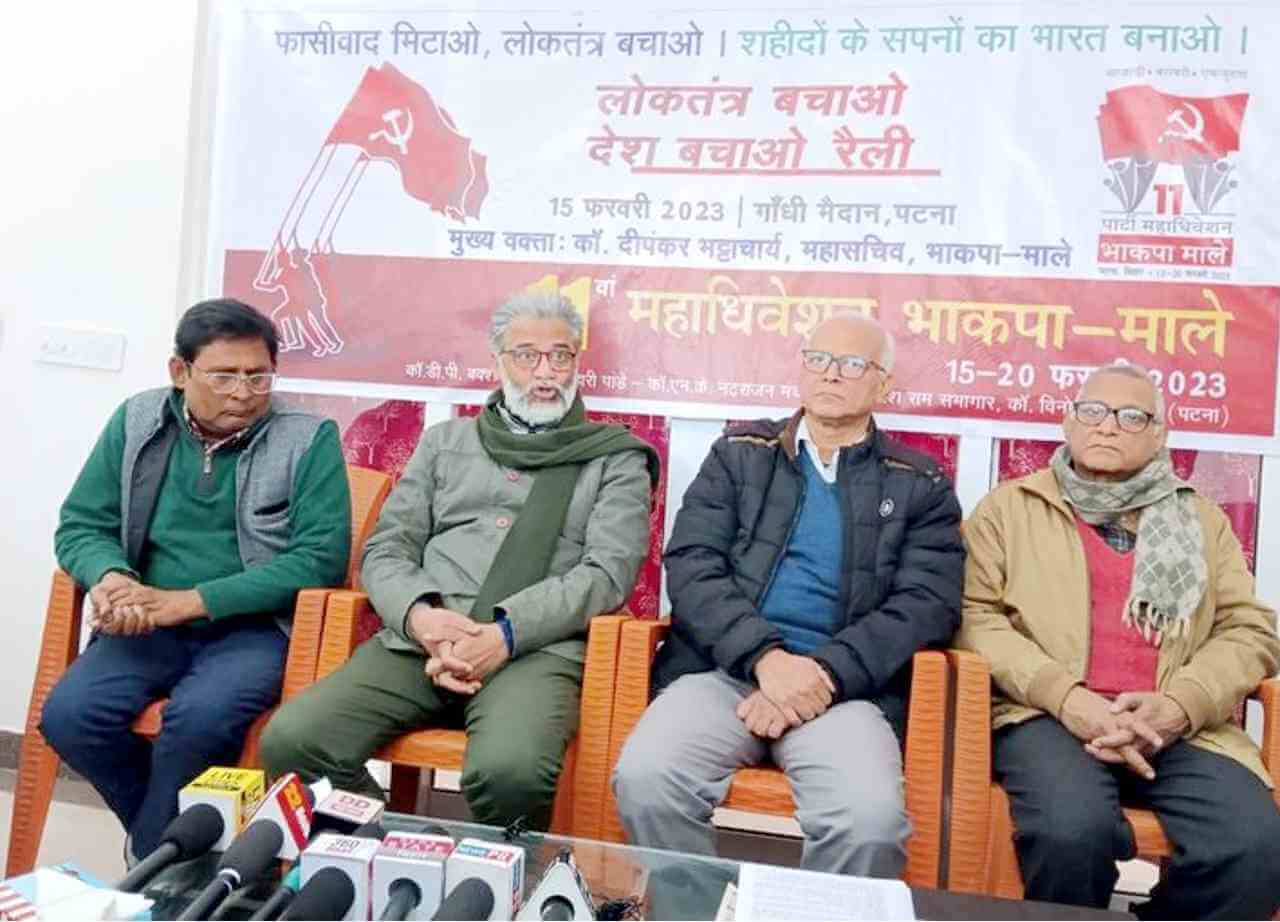 The Communist Party of India (Marxist-Leninist) Liberation will hold its 11th Congress on 15-20 February in Patna (Bihar). This Congress will be preceded by a national ‘Save Democracy - Save India’ rally at Gandhi Maidan in Patna on 15 February. It is expected that lakhs of rural poor, farmers, women, students, youth and members of the working class including Scheme workers from Bihar and other states will take part in this rally. The rally will raise the burning issues as under Modi government’s bulldozer raj the people’s needs like employment and livelihoods, right to education, health & housing as well as farmers’ demands like MSP, sharecropper rights and farming input costs are perpetually unfulfilled and all the promises made by current regime have turned out to be deliberate jumlas. The unemployment, inflation and price rise are uncontrollable while large scale evictions, bulldozers and displacements have become the order of the day. This situation is unacceptable and every attack on the rights of the people must be opposed on the streets.

The party congress’s open session will begin on 16 February in Shrikrishna Memorial Hall in Patna which will be addressed by the leaders of Left and fraternal parties including CPI(M), CPI, RSP, Forward Bloc, RMPI(Pasla), Lal Nishan Party, Satyshodhak Samaj Party, Marxist Coordination Center (MCC) and others. The party expects this inaugural session to be a new beginning of Left assertion at the current juncture of Indian politics.

This party congress will also hold a special session in the form of a national convention on 18 February 2023 on the subject of building a broadest unity among opposition parties against the rising fascist attacks on our democracy and the Constitution. The leaders of JD(U), RJD, Congress, JMM, HUM(Secular) and many other parties including Nitish Kumar, Tejaswi Prasad Yadav, Hemat Soren and Jitanram Manjhi are expected to address this convention.

The Party congress of CPIML will discuss and deliberate on the orientation and tasks on the ongoing resistance movements against fascist assaults in the country, besides other issues including adverse effects of climate change and neglect of environmental dangers by the governments. What we have seen in Joshimath was a deliberate criminal neglect by the government, and now the country is on the verge of losing a whole city’s existence from the map. Similar neglect continues in almost every state which endangers the environment and climate besides devastating the life and livelihoods of lakhs of people. Today Joshimath could be made an international issue only because of CPIML's protracted struggle for saving this town. The party began raising this nearly two decades back through our leader Atul Sati when the same hydro-power project was approved and the construction for the same began. The protection of environment and Climate Change will always be taken up by the CPIML on priority.

The congress will also discuss national and international political situations besides updating the party's programme and constitution. Different sessions will be allotted for each topic.

The 11th Congress will be attended by around 1700 delegates and observers from all states. The preparations for the congress are being done on a large scale. Besides carrying out publicity and campaigns on issues to be raised, the fund collection is also taken up on a mass scale. Party members and activists are doing door to door collections which are receiving enthusiastic support from a large section of supporters and well wishers.

Party Politburo member Swadesh Bhattacharya addressed a cadre convention held in Patna followed by a press meet on 15 January where he also highlighted the issue of large scale displacement of dalits and poor on the pretext of various schemes, which will also be an issue for the party’s forthcoming 11th congress. The question of teachers’ appointments in Bihar and in other states and rising unemployment among youth will also be discussed along with the movement for employment, he said.