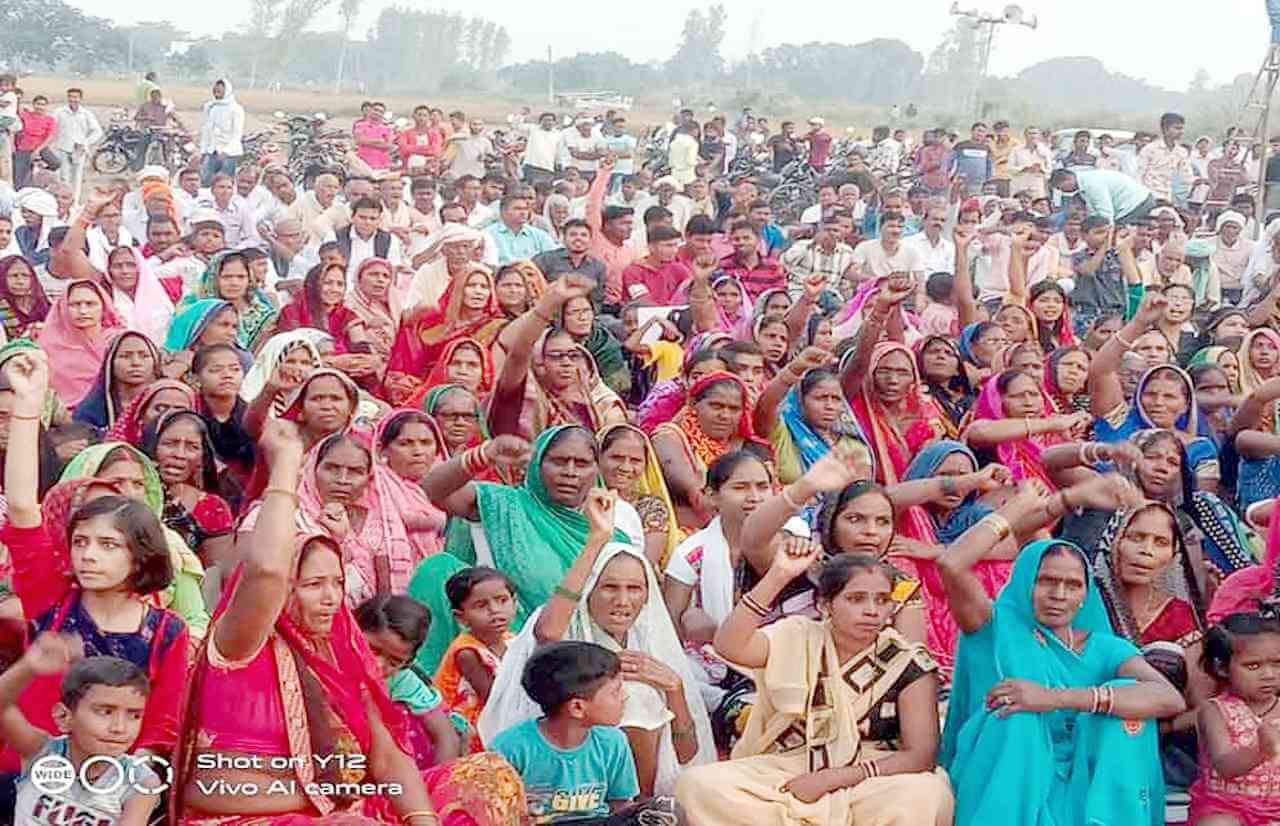 Report of from the fact-finding team comprised of Dr. Muneeza Khan from Centre for Justice and Peace (CJP),  Kusum Verma and Dhanshila Devi from All India Progressive Womens' Association (AIPWA) and Ramji Yadav and Aparna Yadav, editors of the magazine, Gaon Ke Log.

The Yogi government has declared an ambitious project of the extension of Manduri airstrip in Azamgarh district of eastern Uttar Pradesh, into a national-international airport. About 670 acre of fertile agricultural land is to be acquired for this purpose out of which 360 acre of land has already been surveyed. This project will affect 45,000 people in eight gram sabhas and nearly 4000 houses would be demolished for the planned airport.

On 12 October 2022, the sub-divisional magistrate and the local police entered Jamua-Hariram village, to carry out the land survey without giving any prior notice to the villagers. The village populations is mostly made up of Dalits and OBCs. When the locals, particularly the women protested, the officials abused the people with casteist slurs and went back. They returned again in the night with additional police force but with no women police with them. This time they attacked the villagers and injured many. Sunita, a poor labourer was grievously injured and had to lose her daily wages for the next few days. Prabha Devi (40) narrated that she fell in a paddy field when the police hit her on her thighs.

When the women of this village were asked if they complained against the police action, they retorted, " When the police and the government officials are themselves beating us, to whom should we complain?" Some villagers reported that they had earlier met the District Magistrate of Azamgarh about the land acquisition, who only warned them against obstructing government work or face punishment under NSA (National Security Act).

The barbaric incident of 12-13 October galvanized the locals into action and from the same day they started a sit-in near the primary school of village Kheria. Calling themselves the ‘Land-House Struggle Committee', the protest sees participation of hundreds of locals from the affected areas who join the sit-in everyday between 2-6 pm. The participation of women in the protest is noteworthy. Ranjita Kumari, a student of Class XI and a regular participant of the sit-in said, "I dream of getting higher education and a job. If this land acquisition is successful, my home will be demolished. I will not be able to study further. Modiji appeals to the public to plant trees on Environment Day but when our fertile land and trees are destroyed for this airport, will not the environment suffer?" The representative of the village Pradhan of Jamua-Hariram, Manoj Yadav informed the fact-finding team that they had not received any official document from the government till date regarding the ongoing land survey or acquisition. He added that if the government wants to develop the economy and build an airport, they should use barren land instead of displacing villagers from their residential and agricultural land.

The Land-House Struggle Committee is lead by Rajeev Yadav, a social activist. On being questioned about the future of the movement and the challenges ahead, he said that the local unit of Samyukt Kisan Morcha was firmly supporting the protest. Not only people from the state but from across the country are supporting the movement and Medha Patkar (Narmada Bachao Movement) and farmer leader Rakesh Tikait had visited the sit-in to offer their support. Another local leader, Ramnayan Yadav said that women who had rarely ventured out of their village are now the staunchest supporters of this movement and their large presence in the ongoing sit-in proves this. The resistance offered by the locals has pushed back the police and they have not dared to enter the village again. He added, "We believe in the law of the land and will fight to defend our land and the Constitution."

On the basis of the interactions with the affected people, the fact-finding team was of the opinion that (a) the perpetrators of the police atrocity on the innocent locals and women of Jamua-Hariram village should be booked as per law. A high-level judicial enquiry into the incidents of the intervening night of 12-13 October should be conducted. (b) 670 acre of fertile land and thousands of houses would be destroyed by the proposed airport.  This project is therefore anti-people and anti-environment. This model of economic development of the government is in fact a model for human and environmental destruction. The proposed Mandura Airstrip extension plan should be scrapped.