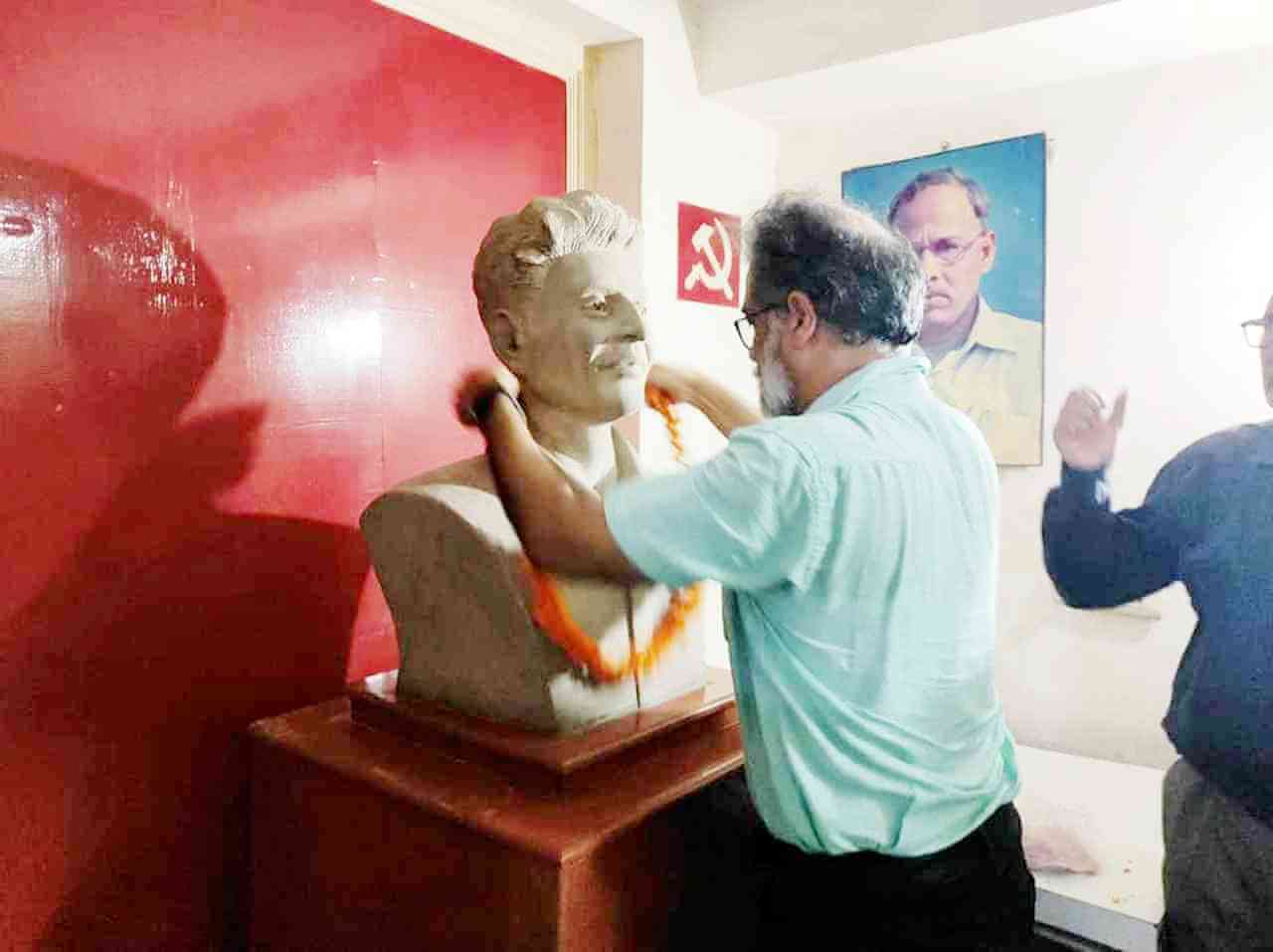 July 28, 2022 marked the fiftieth anniversary of the martyrdom of Comrade Charu Mazumdar, the great architect of the Naxalbari peasant upsurge and the founding General Secretary of the CPI(ML). His martyrdom anniversary was commemorated at all places with paying tributes to the martyrs and by taking pledge to strengthen and equip CPIML in all respects to play its due role in today’s challenging situation to fulfil the dreams of the martyrs. The pledge was taken to strengthen the party organisationally, politically and ideologically as per the need of the times where we find ourselves in an extraordinary situation in which the “lives, livelihood and liberties of the people have become extremely insecure, the republic is fast being stripped of its constitutional commitment to secular democracy and trapped in the cage of a fascist Hindu Rashtra”. The Party must now take the lead to rescue and rebuild the republic in the face of this unprecedented disaster.

In CPIML headquarters at Delhi party general secretary Dipankar and many other senior leader garlanded the statue of comrade Charu Mazumdar which was followed by a pledge meeting. In other parts of Delhi various party units organised pledge meetings up to branch levels attended by members and supporters.

Marches were taken out in various parts of West Bengal in memory of Comrade CM. The marches in Siliguri and Kolkata were quite impressive and were led by WB Secretary Abhijit Mazumdar, Polit Bureau members Kartick Pal, Partho Ghosh, Arindam Sen along with Basudev Bose and Mina Pal. Thousands of party members and supporters attended pledge meetings and marches across the state.

A Booklet ‘Tebhaga, Naxalbari and Charu Mazumdar’ depicting Comrade CM’s life and works written by Arindam Sen, was released on this occasion.

In Patna, tributes were paid leading comrades in the party state office. Memorial meetings were also organized at various places in Patna including Jakkanpur, Digha, Chitkohra and Lalu Nagar. The leaders and activists pledged to take inspiration from the life of Comrade Charu Mazumdar and carry forward his work of strengthening the party and make it capable in every way of handling the current challenges. Speaking on the occasion State Secretary Kunal appealed to every member, branch and committee of the party to work for the success of the 11th party congress to be held in Patna in February 2023. Comrade Rajaram said that as the inheritors of Comrade Charu Mazumdar's legacy we shall work unitedly and surely push back the fascist forces that threaten our country.

The martyrdom day was observed at many places in Odisha including Bhubaneshwar, Gunupur and Rayagada.

Similar programmes were taken up in all the states.

A memorial program was organized at the union office in Surkhikal, Bhagalpur. Leaders and activists garlanded the portrait of Charu Mazumdar and observed 2 minutes' silence to pay tribute to all the martyrs of the left-democratic movement.

In Bhojpur, the martyrdom day was observed at Sahangi in Gadhani with a Sankalp Sabha. Flag hoisting was done by Visheshwar Paswan and garlanding of Charu Mazumdar's portrait was done by leaders including CC member Manoj Manzil. Speaking on the occasion, Manoj Manzil said that the police killed Comrade Charu Mazumdar thinking that by doing so they could snuff out the spark of Naxalbari, but instead that spark came to Bhojpur and today the toiling masses, poor, dalits, workers and farmers are holding aloft the red flag and carrying forward Comrade Mazumdar's dreams. Today the central government has imposed taxes on the roti (staple food) and medicines of the poor. Intellectuals and journalists who speak out are thrown into jail. Farmers in Bihar are yearning for water but the Nitish government is doing nothing for them and all government hand pumps lie dysfunctional. Therefore, the best tribute to Comrade Charu Mazumdar would be to carry forward the spirit of Naxalbari and work for the rights of the toiling masses. Dozens of students, youth, workers, farmers, women and men took membership of CPIML on the occasion.

In Jharkhand, a Sankalp Sabha was held at the Mahendra Singh Bhavan in Ranchi attended by leaders and activists including CC member Shubhendu Sen, Control Commission member Sushila Tigga, Bhuvaneshwar Kewat, Eti Tirkey, Sudama Khalkho and others. Shubhendu Sen said that on this day we must resolve to take the party to greater heights and work together for the success of the 11th party congress and the defeat of fascist forces in the country. The martyrdom day was observed at Rahe with the slogan 'Oust BJP, Save the Country' led by State Secretary Manoj Bhakt. A Sankalp Sabha was organized at the Saraidhela party office in Dhanbad. Comrade Janardan Prasad and other leaders and activists paid tribute to martyr Comrade Charu Mazumdar with garlanding of his portrait and 2 minutes' silence.

Uttar Pradesh party units observed as Sankalp Diwas across the state. At the party office in Lucknow the leaders and activists speaking on the occasion discussed the current political situation and challenges and stressed the need to strengthen the party and mass organizations in order to fulfill Comrade CM's dreams. Sankalp Diwas at the Banaras party office was addressed by State Secretary Sudhakar Yadav and others. Sankalp Diwas was observed at various places in Gorakhpur, Azamgarh, Mau, Ballia and other Districts. 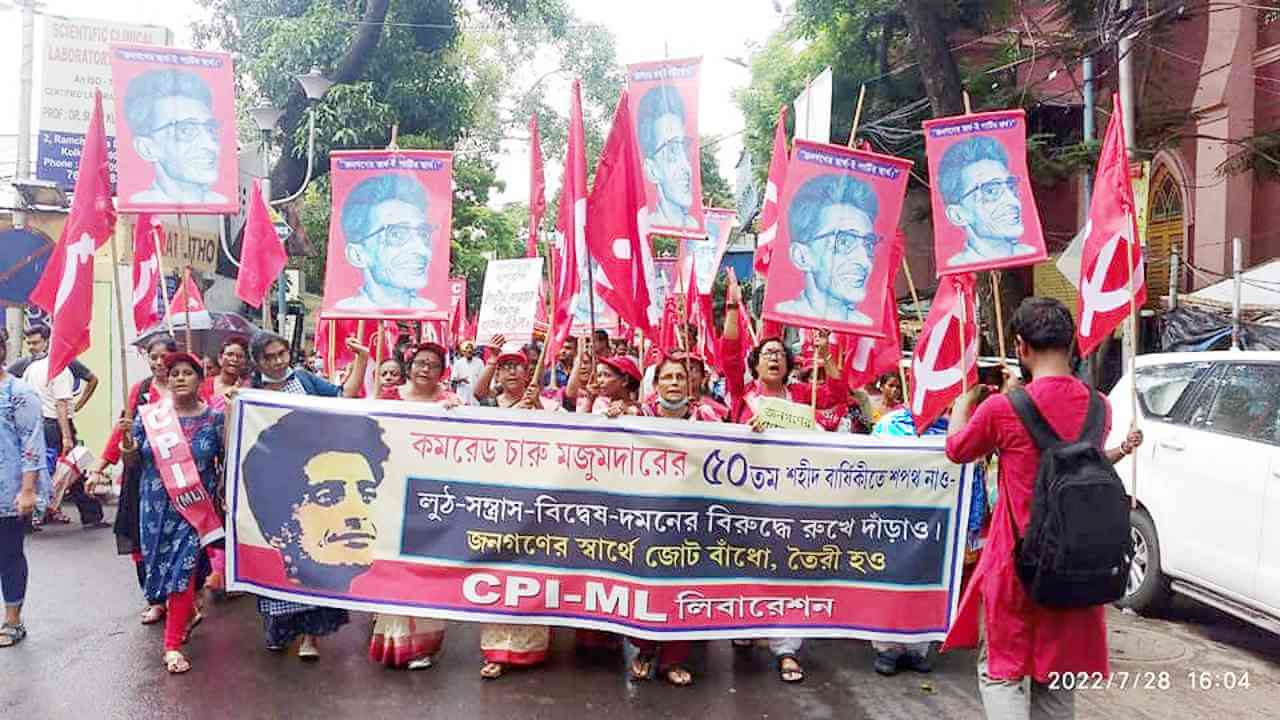