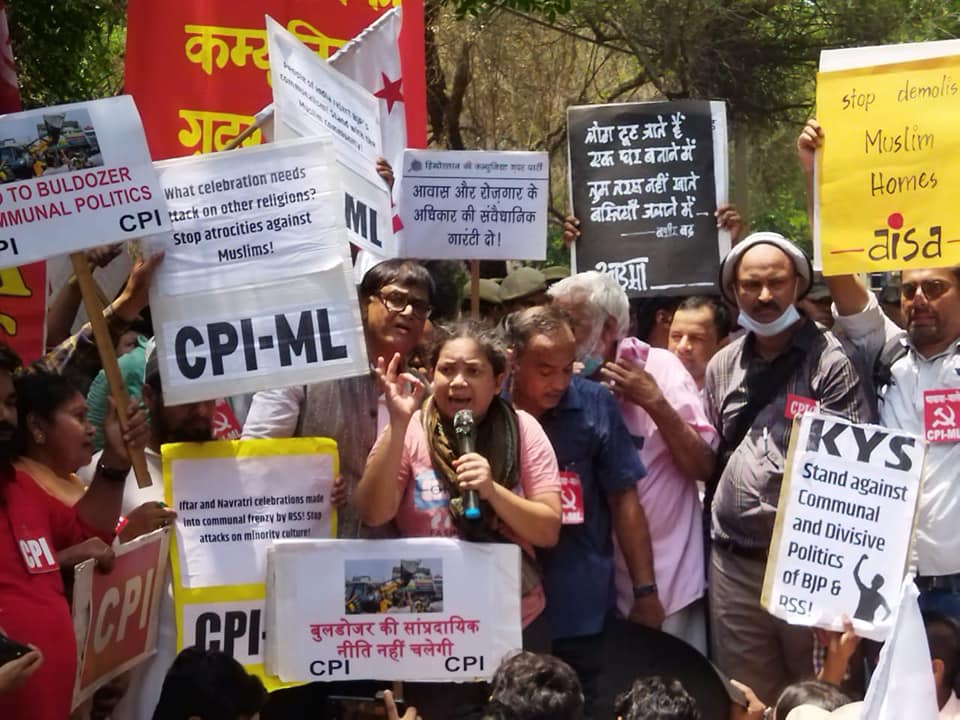 Hundreds of people from across the Delhi gathered at the Delhi’s Kashmiri Gate on May 11th to take part in the protest march to Lieutenant Governor’s House calling for an end to communal and fascist Bulldozer politics run by BJP ruled MCDs. The protest was jointly called by CPIML, CPIM, CPI and various students and civil society groups, including organisations representing people whose houses had been razed during the previous demolition drives.

Sucheta De, Central Committee member of CPIML and leader of AICCTU warned that working class and toiling masses of Delhi will not allow the communal venom the BJP is trying to spread in Delhi in the name of anti-eviction drives. “Like Jahangirpuri and Shaheen Bagh, the people will give a befitting response against such politics of hate.” said Sucheta De.

Ravi Rai, CPIML Delhi State Secretary said that “like the Babri Masjid demolition, the demolition drive is a staging of fascist terror by BJP against the minority Muslim community – this time on a more sustainable, local scale.”

Since the Jahanghirpuri violence in April this year, the BJP ruled MCDs in Delhi have embarked on aggressive campaign threatening Muslim majority areas with bulldozers and demolitions under the veil of anti-encroachment drive. In Jahangirpuri, the demolition drive went on despite the stay order by Supreme Court and it was only stopped after the intervention by left parties’ leaders and cadres. On May 9th, the Bulldozers were brought in at the Shaheen Bagh. Clearly, the attempt was to intimidate the residents of Shaheen Bagh the site of historic anti-Citizenship Amendment Law protests. Once again, the residents of Shaheen Bagh resisted the fascist onslaught and the bulldozers were forced to go back.

Members of Hawkers and Vendors association and Dhoobighat Jhuggi Adhikar Manch also condemned the targeted attack on the Muslim community in the name of anti-encroachment drive.