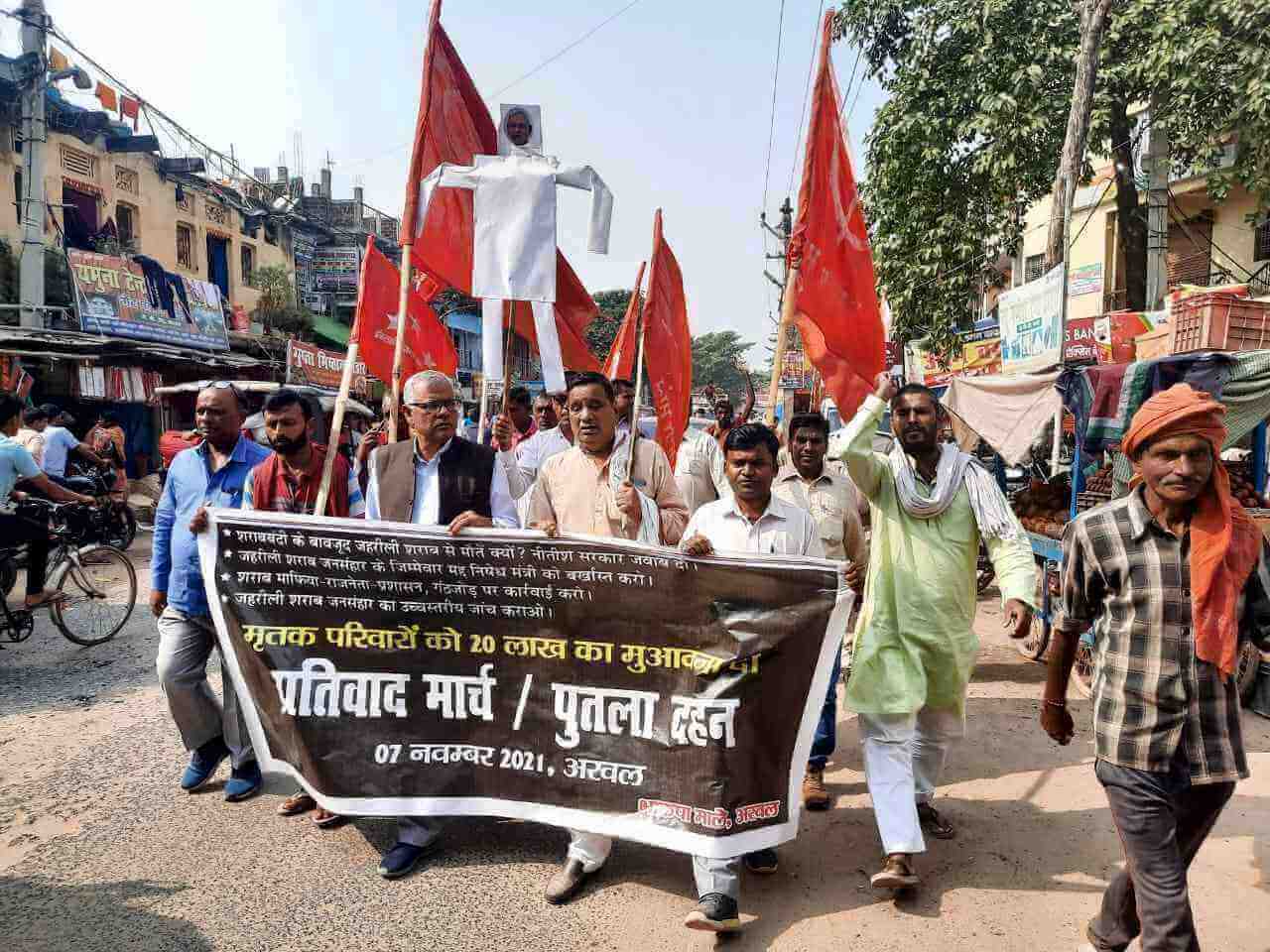 The relentless series of illicit liquor deaths in Bihar shows no signs of abating, while the government does nothing but indulge in empty rhetoric. CPIML State Secretary expressed deep concern at the government's attitude and said that with the latest deaths (6 deaths as of 11 November) in Shrisia and Bariyarpur villages in Kanti Block, Muzaffarpur District, the poisonous liquor official death toll has reached 62. The actual number of deaths is far higher.

Comrade Kunal once again reiterated the demand for the removal of the Prohibition Minister and Rs 20 lakhs compensation and employment for kin of the victims. He said that an inclusive monitoring system should be constituted (with the inclusion of social workers) across the State at the Block level to end the illicit liquor trade, but Nitish Kumar is deaf to these requests and suggestions.

(1) The enquiry team was told by deceased Sumit Rai's father Laxman Rai, mother Asha Devi, uncle Narendra Rai and others that sumit Rai fell sick in the evening of 8 November, after which they took him to Kanti PHC and the doctor gave him 3 injections but his condition deteriorated further. He was then brought to Muzaffarpur Shri Krishna Hospital in the hospital ambulance and a CT scan was done after which he was declared dead. The doctors refused to do a post-mortem, and arrangements were not even made for an ambulance to bring the body home. The family paid Rs 2000 for a private ambulance to bring the body home. Sumit's mother said, Sumit was 28 years old and has a wife and 4 young children with nobody to look after them now. She said, someone gave my son poisonous liquor due to which he died but the local administration is bent on protecting the liquor mafia.

(2) Sanjeev Kumar, brother of Bariyarpur toxic liquor victim Dileep Rai (50 years old, s/o late Ramanand Rai) told the enquiry team that Dileep Rai started vomiting at 6 pm on 8 November and was admitted in Prashant Hospital at Juran Chhapra. After 24 hours he died in hospital on 9 November. The post-mortem was done at Shri Krishna Hospital and the results are awaited. Sanjeev Kumar said very clearly that Dileep Kumar was killed by giving him poisonous liquor. The enquiry team demands that the government should take action against the liquor mafia and aid the victim's family.

(3) The third deceased, also from Bariyarpur, is Ashok Rai (55 years old). His son Rahul Kumar told the enquiry team that Ashok Rai started feeling uneasy at 1 am in the night of 8 November. We took him to Medical Hospital where they did an ECG after which the doctors declared my father dead. No post-mortem was done. Vinay Kumar, brother of the deceased, believes that Ashok died due to poisonous liquor. He said, if we raise our voice against the liquor trade the police will make our lives difficult.

(4) Chunchun Rai, son of Bariyarpur victim Rambabu Rai told the enquiry team that he gave his father medicine for his uneasiness in the night of 9 November but the uneasiness increased and there was profuse perspiration; he also lost his eyesight and then died. The post-mortem has been conducted but they have not got the result yet.

According to the local people, Tarkeshwar Patel, Kishore Ram, Lalbabu Das, Manoj Singh and Hari Singh are admitted in hospital.