Forcible Cremation of Body of Dalit Girl Killed In Delhi! 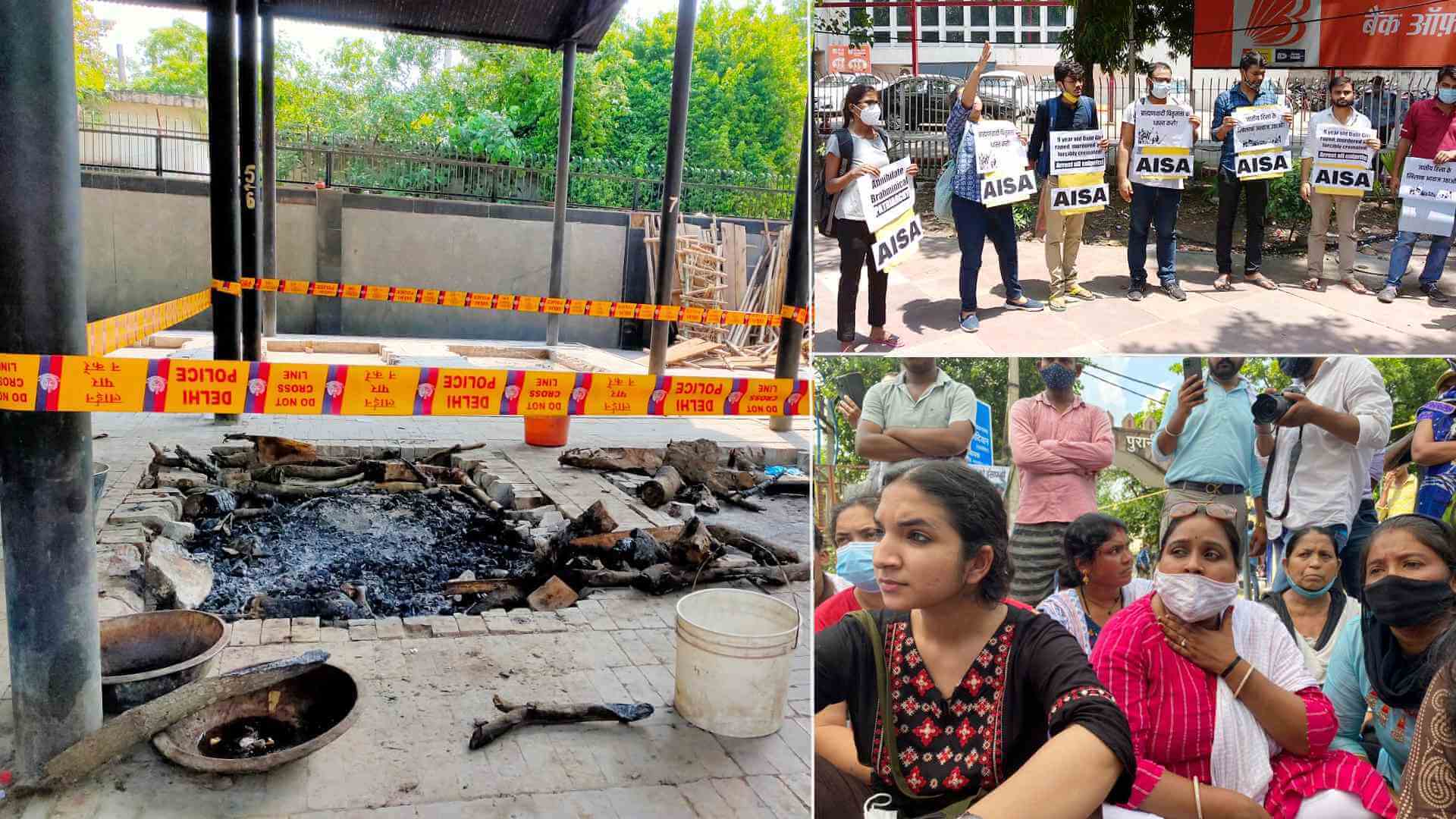 CPIML-AISA-AIPWA Join Protest by Villagers of East Nangal Demanding Justice against Perpetrators of Rape and Murder of Dalit Minor!

A team comprising Kavita Krishnan, CPIML Politburo member and Secretary, All India Progressive Women’s Association (AIPWA), Sucheta De, member of the CPIML Delhi State Committee, AISA Delhi President Kawalpreet Kaur and AISA activist Himanshu went to Nangal to show solidarity with the ongoing protest movement demanding justice for the 9-year-old Dalit girl who is suspected to have been raped, killed and forcibly cremated by a crematorium priest in Delhi.

The team met the grieving mother of the Nangal rape-murder victim, who said “I want justice for my daughter.” She said that their household is extremely poor, her husband is unemployed, and she picks rags or begs at Pir Baba Mazar - a local Sufi shrine – in order to survive. Her daughter was their only child – born after many prayers, she said. In the evening on 1 August, she had been sitting at the Pir Baba shrine to beg.

The girl’s father told his daughter he would go get some vegetables and she should get some water from the cooler at the crematorium right across the street from Pir Baba. She said she would do so and would wait for her father at the Pir Baba shrine. A while later the priest from the crematorium went to the girl’s house in the village, to ask where her parents were. Told that her mother was at Pir Baba, he came over to the shrine to tell her that her daughter was dead of electrocution. She rushed to the crematorium to find her daughter’s body, blue in the mouth, drenched and wet. She also realised that the priest and three of his aides had been drinking in a small room at the crematorium premises. They would not let her leave the crematorium, and told her not to call anyone for help, not even her husband.

A policeman also arrived. In the presence of the policeman, the priest and his men forcibly began burning the girl’s body at a pyre. They did not wait for the girl’s father to arrive, neither did they call an ambulance. This unseemly hurry to burn the girl’s body without any attempt even to confirm her death, or to wait for her father and other villagers to mourn her and pay their respects, raises suspicions that the priest and his men had something to hide, and the policeman colluded with them. But word of the girl’s sudden and suspicious death and hasty attempts at cremation reached other villagers who arrived at the crematorium and asked the policeman to help stop the cremation. When he did not oblige and threatened them with arrest if they did not leave, the villagers filled buckets of water to pour on the flames. The policeman present caught the hand of one of the villagers to prevent him from pouring water. Eventually the villagers managed to salvage the girl’s legs from the pyre – and her father arrived at this point. He had been unable even to see his daughter’s dead body whole. The parents suspect that the hasty and forced cremation was to destroy evidence that their daughter may have been raped and killed.

What followed was most shocking: the parents of the girl were taken by the police to the local police station. There, a local police agent, Naresh Karotiya Valmiki, whom the girl’s mother refers to as a “dalal” and “dabang”, kicked the girl’s father, beat and abused him viciously. The girl’s mother and father were then imprisoned in separate rooms at the police station, where they were held all night and all of the next day. They were released on Monday, 2 August, at 5 pm only when the villagers blocked the main road in protest demanding their release and truth and justice for the little girl.

The silence of the Prime Minister who had promised an end to “naari par vaar” (violence against women) and Home Minister Amit Shah on the criminal conduct of police officers who are answerable to the Union Home Ministry, speaks volumes about their attitudes towards Dalits and women.

This incident is clearly a caste-based crime, where a Brahmin priest is the main accused in the killing and possible rape of a Dalit girl. The Delhi Police is a participant in this heinous crime. Not only must the priest and his aides face punishment; the concerned police personnel must also be arrested and charged with their role in the crime. This cannot happen so long as the Delhi Police remains in control of the investigation. A judicial enquiry into the incident is a must, in order to ensure that justice is done.