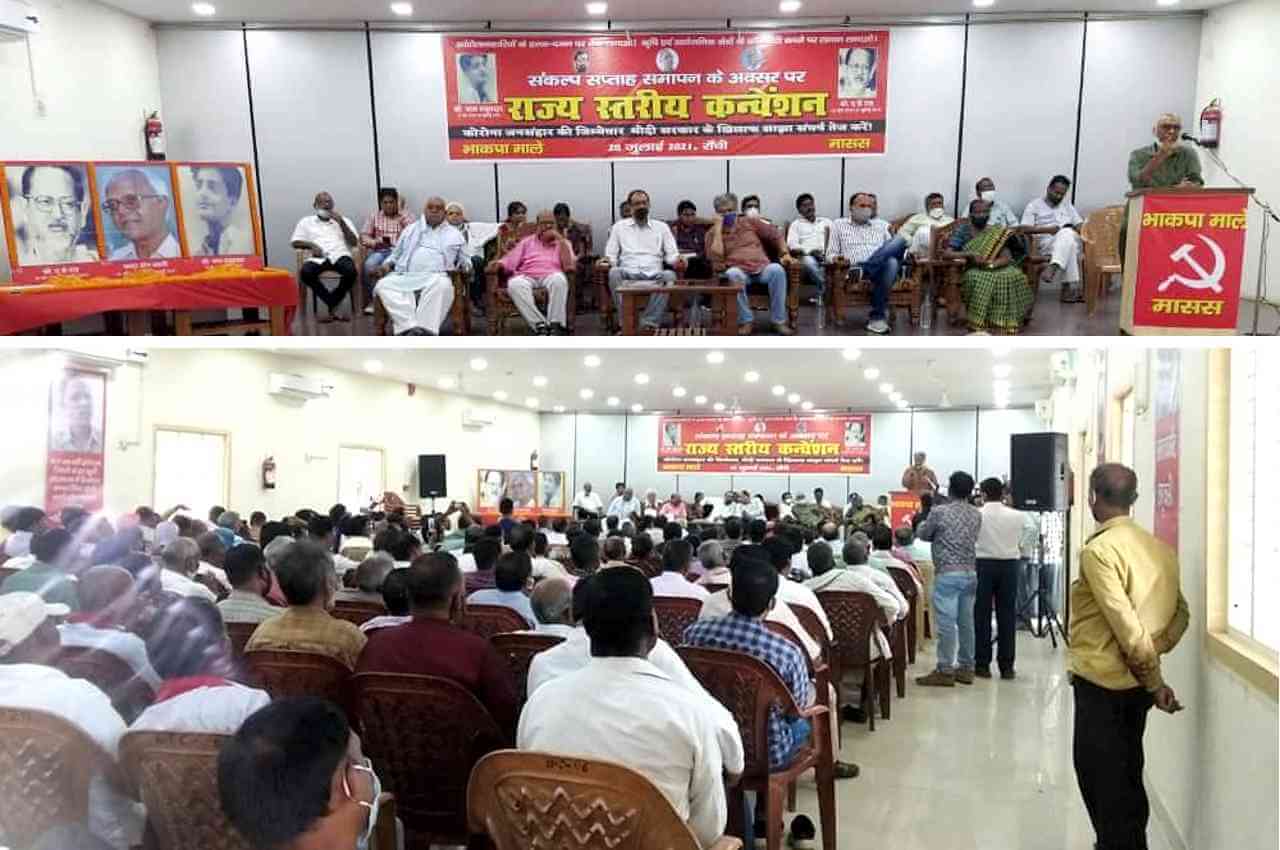 The week concluded with a state level joint convention at the Loyola auditorium in Ranchi attended by hundreds of Left leaders and activists. The main speaker CPIML General Secretary Dipankar Bhattacharya said that the tradition of struggle shown by Comrades Charu Mazumdar and AK Roy and Fr Stan Swamy is a source of ideological energy and courage for the struggle against the mayhem unleashed on the country by Modi-Shah regime. The united strength of CPIML and MCC will give a new impetus to our fight against fascism. The Jharkhand government must show through its policies and actions that it is different from the anti-people NDA government.

MCC General Secretary Haldhar Mahto said that the loot and tyranny unleashed by the Modi government has shown us that the true interests of the people will be served not just by change of government but by a systemic change led by the Left. The convention was also addressed by CPIML Politburo member Manoj Bhakt, MCC leader Mithilesh Singh, former MLA Rajkumar Yadav, AIPWA leader Geeta Mandal, AIPF leader Kumar Varun, MCC leaders Agam Ram, Dhaneshwar Turi and others. The convention began with garlanding and a minute's silence for the 3 martyrs.

1. Statewide mass protests and a one-day hunger strike will be organized on 5 August against BJP's attempts to topple the Hemant Soren government in Jharkhand, against the Pegasus spying scandal and to demand a judicial probe into Fr Stan Swamy's death and punishment for the guilty.

2. 'Apnon ki Yaad' will be held every Sunday and people's hearings will be organized throughout August on issues like the Modi government's denial of oxygen shortage deaths, inflation and unemployment.

3. A youth campaign will be organized from 15 to 30 August at Block HQs across the State on the issue of employment.

4. Kisan Panchayats will be organized till 14 August at Block HQs across the State in support of the ongoing farmers' movement.

5. From 9 to 15 August a campaign will be organized to save Jharkhand from corporate loot of water, forests and land, and to save the country from fascist tyranny.