Visit to the Flood Affected Areas in Bihar 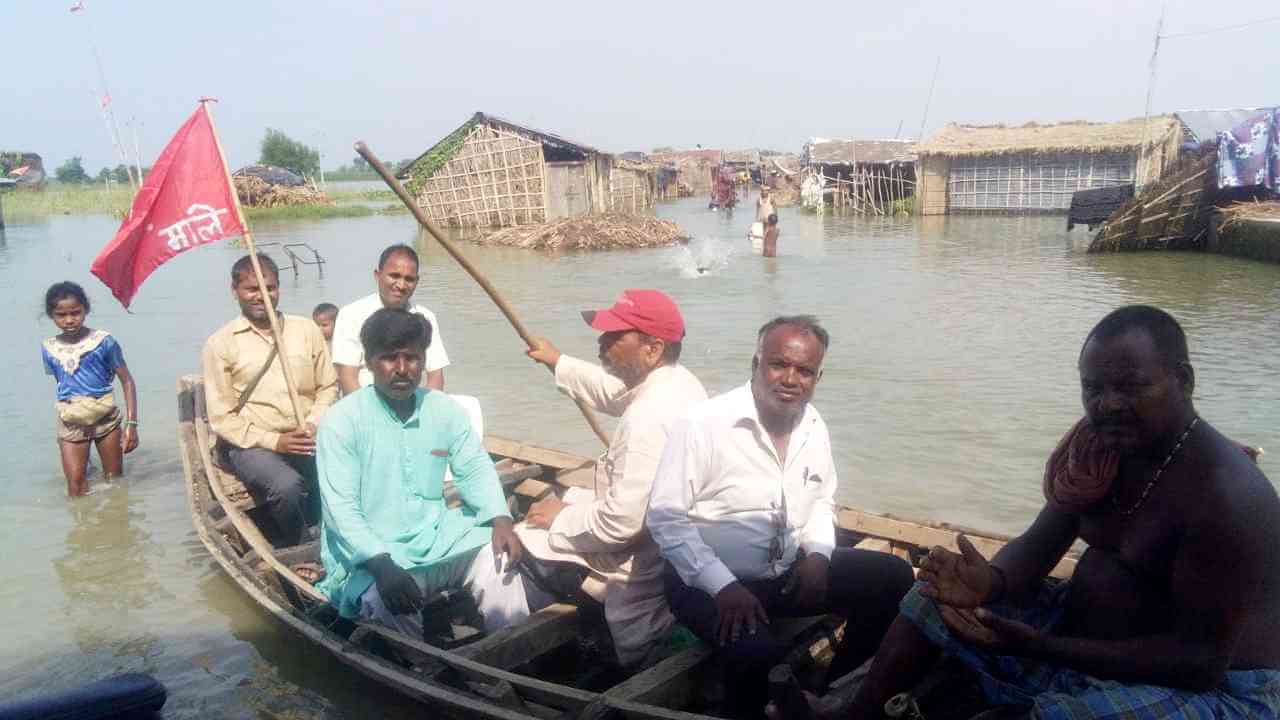 Dhirendra Jha said that the ravages of the floods and excessive rains on top of Corona and inflation have broken the backs of the people. The government and administration remain extremely insensitive and flood relief is not being given as per established protocol. The Bihar government and all parties should demand a special package from the Central government. A chakka jam protest will be organized in Darbhanga on 27 August for relief and compensation for flood affected poor and farmers.

Deputy leader of CPIML legislative party Satyadev Ram said that farmers and workers have been relentlessly distressed by floods for the last 2 months. Farming and crops have been ruined. But government relief work is conspicuous by its absence. All these issues will be raised with the Bihar Chief Minister. He raised the demand of flood relief for rural agrarian workers, one-year waiver of electricity bills, price of cooking gas to be cut by half, and waiver of KCC loans and land rent for farmers.

Meanwhile, CPIML leaders visited Ismailpur, Gopalpur and Rangra Blicks in Bhagalpur where many dams including the Ring Dam have been washed away. The team reported that about 80% homes in these Blocks have become water-logged. Many houses have been destroyed, cattle swept away, fields submerged and crops ruined. Even Bhagalpur city is flood-ravaged. Relief camps have been set up here and there but these are highly inadequate. The government's flood-preparation seems confined to announcements and does not extend to relief and aid for the affected people. As the water recedes in urban areas, problems of filth and disease have started but the Municipal Corporation and administration are doing nothing to tackle this. These problems will soon be rampant in rural areas also.

CPIML Bihar State Secretary Kunal said that the worsening flood situation in the state is of grave concern. Lakhs of people in North Bihar were already affected, and now South Bihar is also affected. Even the capital Patna is threatened by the rising Ganga.

Several areas of South Bihar including villages in Patna, Jehanabad and Bhojpur are grappling with flood. On the one hand is the Corona pandemic, and on the other the people are facing the flood disaster.

It has become the norm for lakhs of lives in Bihar to become flood-affected every year. The so-called double engine government shows no seriousness towards this.

This time no government relief work is visible anywhere, unlike previous occasions. Many people have died painful deaths. In such a situation the government should carry out relief work on a war footing, but the disaster department is an utter failure. The Nitish government has failed to make any precautionary preparations for floods.

CPIML demands that flood monitoring committee meetings should be immediately held in all Districts, displaced families should be provided with polythene sheets and food, fodder should be provided for cattle, special camps should be organized for renewal of cancelled ration cards and loot of rations for the poor should be ended. The poor have been devastated by first the 4 months' lockdown and now the floods. Despite this, many District administrations including Darbhanga are depriving the poor of rations in the name of 'partial-full'. This is extremely unfortunate.