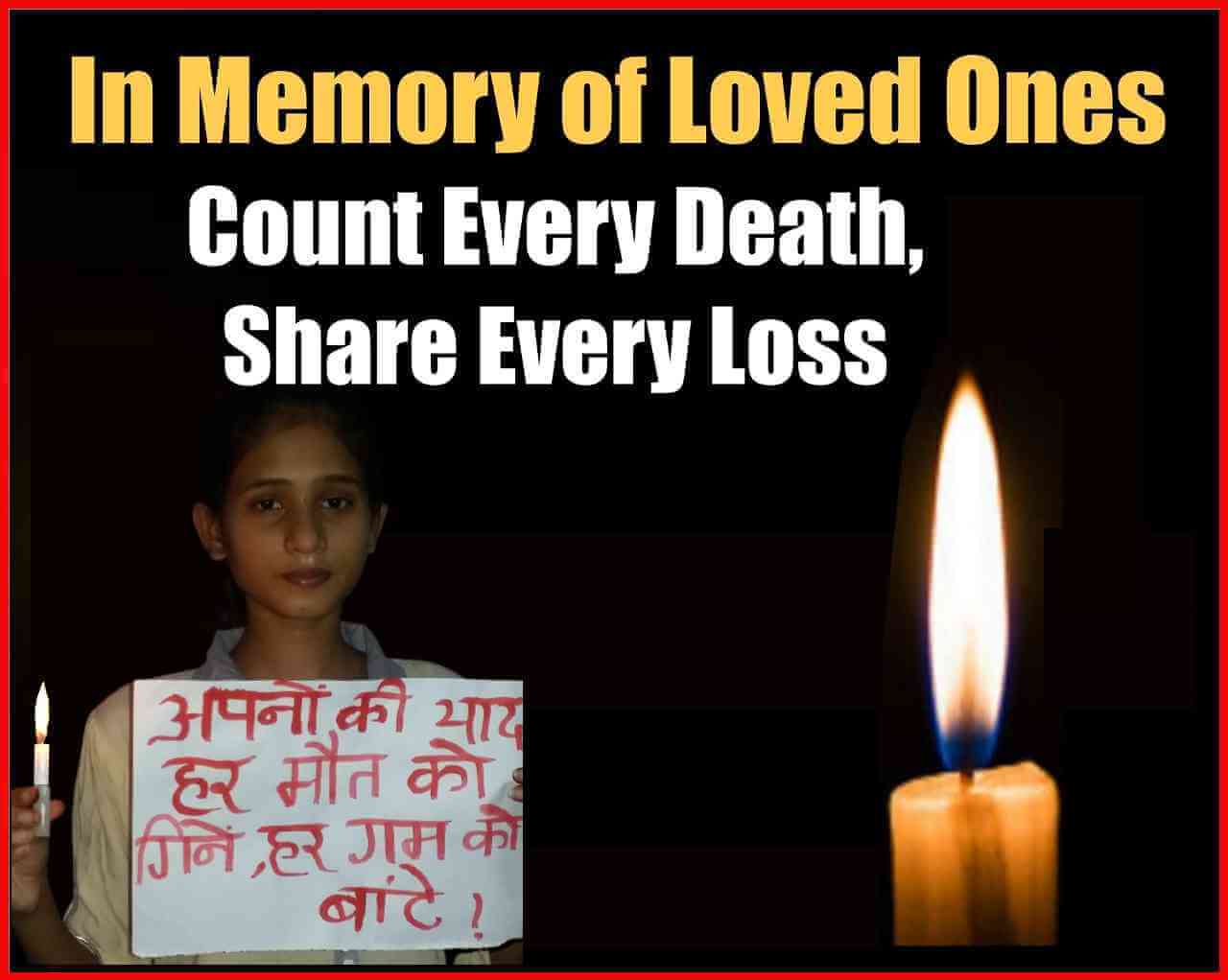 Citizen activists came together on Sunday as part of the ‘Count Every Death’ Campaign to remember and document the experiences of families and individuals who lost their loved ones to the pandemic.

A number of artists, writers, and activists issued an appeal to light a lamp or candle every Sunday, for those killed by Covid or the long walk back home amid the lockdown: to remember the humanity of people now turned into a statistic, and to keep alive our own humanity in so doing.
Among the signatories to the appeal were actors Parambrata Chatterjee, Chetan “Ahimsa” Kumar, Prakash Raj and Richa Chadha, badminton player Jwala Gutta, singers T.M. Krishna, Moushumi Bhowmik and Rupam Islam, Assam MP Ajit Bhuyan, Gujarat MLAs Chhotubhai Vasava and Jignesh Mevani, Bihar MLAs Manoj Manzil and Mahboob Alam, Jharkhand MLA Vinod Singh, former navy chief L. Ramdas, writers and academics Sumit and Tanika Sarkar, V. Geetha, S.V. Rajadurai, Samim Ahmed, Du Saraswati, Rajendra Chenni and Rahamath Tarikere, Kannada filmmakers Giriraj and B. Suresh.

The appeal says: “Governments do not want to count the dead or even admit they have died. They are even removing the shrouds from the riverside graves so that the world may not be able to count our dead. By refusing to count them, they are seeking to forget our precious loved ones. But we cannot let our loved ones be forgotten: each has a name, each must be remembered, each must continue to be loved.”

Richa Chadda said to a newspaper, “A lot of people are numb or gutted right now. It will take a long time to heal. People aren’t just statistics: they are colleagues, papas, betis (daughters), dadis (grandmas), classmates and wives.” Jwala Gutta added, “We cannot exist as a society without (remembering) those who lost their lives, like the workers who died on the roads. I shall be surprised if no human feels for these people.”

TM Krishna told the paper, “Are these Covid deaths? These are deaths caused by an uncaring government. The migrant workers dying is a classic example, and people dying for lack of oxygen.”

NFIW leader Annie Raja said that women from many states had joined the campaign and collectively mourned the Covid and lockdown victims, and demanded accountability from the government, to ensure that such killings are not repeated.

'Mahasweta Samajdar, Editor 'Bhraman' magazine, read a Bengali poem by Birendra Chattopadhyay. Kavita Krishnan read a poem by Diksha Bijlani, in the original English, and also translated by her into Hindi, titled “When living is political, can death be apolitical?’

In Karnataka, many workers and activists joined the campaign and spoke on a Zoom call about their experiences of loss. Activist and artiste D Saraswati said they would document all the people who died due to lack of oxygen, hospital admission, medicine or food. “We are here to establish our bonds by remembering all those as ours. We will gather every Sunday and try to ensure these are not just numbers but living and breathing people.”

Narayanamma, a pourakarmika (municipality sanitation worker), inaugurated the event by lighting a candle. She said her friend and colleague Susheelamma died in hospital after developing breathing problems: “We don’t know whether she got oxygen. Maybe she would have lived had she got oxygen. We want a Rs 30 lakh compensation for her family. We demand that a member of her family be given a job by the government.”

Shouri Raj, who heads an association of crematorium workers in the city, said they had been working from 6 am to nightfall every day and would continue to do so. “I have seen so much pain that it made me cry. The words of people who bring the bodies still weighs on my mind.”

Poet Sharifa K read out a poem that questioned the need for constructing the Central Vista at a cost of Rs 20,000 crore when people are not able to pay for beds and oxygen.

Shivalinge Gowda, an activist from Chamarajanagar, blamed the bureaucracy for the death of 36 people there due to lack of oxygen in the Chamarajanagar hospital. He said the government acknowledged only 24 of these deaths.