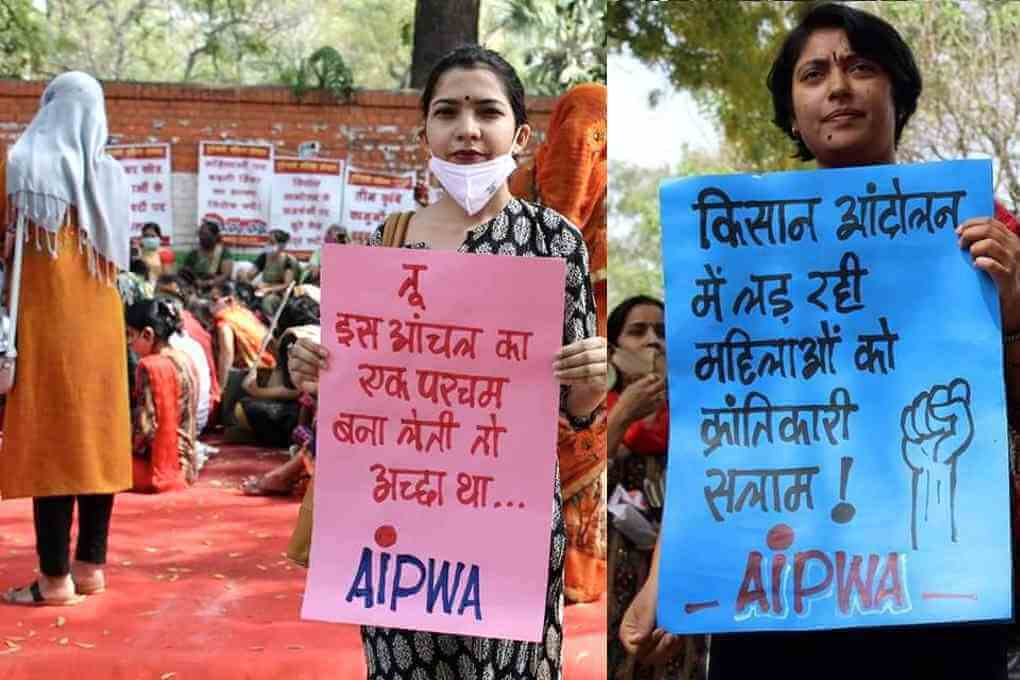 On 8 March 2021 on the occasion of International Women's day, marches, dharnas, meetings, memorandum submissions etc were organized in all places across the country. The Farmers’ Movement dedicated the day for women and women farmers and gave the stages on all Delhi borders to women leaders who led women marches and conducted the stages for the whole day.

Women’s organisations also held programmes at Delhi’s Jantar Mantar on the day. Women all over commemorated the day reiterating that woman’s place is in the resistance and pledged for women's Economic Right, Social Dignity and Political Justice and saluted the struggles going on for women’s rights, especially of women farmers camped on the Delhi borders. They demanded to repeal all anti- people farm laws and to strengthen the fight against the corporate slavery of farmers.

The sombre and grim circumstances in the year 2021 when India’s current rulers trotted out platitudes celebrating “women’s power”, “women’s empowerment” and “women’s achievements”, lacing with sentiments on women’s social role from the fascist handbooks were challenged on the day by women’s movements all over India, and made Women’s Day an occasion to strengthen their unity and resolve to resist a hitherto unprecedented political assault on their very existence.

IWD at Ghazipur was dedicated to protests against growing crimes and violence against women in Uttar Pradesh and solidarity with the ongoing farmers' movement. AIPWA District President Chandravati Devi and other leaders said that the incidents of heinous gang rapes and killing of women are increasing alarmingly under Yogi Raj and demanded speedy arrest and punishment of the guilty.

A women's convention chaired by Indrapati Devi was held in Azamgarh. The convention pledged solidarity with the ongoing farmers' movement and resolved to strengthen and extend AIPWA as an organization.

At a meeting held in Chandauli to mark IWD, District President Munni Devi and other leaders said that heinous incidents like Unnao and Hathras are becoming frequent in Uttar Pradesh and women, especially dalit women, are being subjected to the most appalling atrocities.

IWD was observed in Mathura as a day dedicated to the ongoing farmers' movement and to women's struggles for their rights. A 12-point memorandum was submitted by a delegation led by District Convener Mamata Chaudhury to the Governor via the City Magistrate.

A dharna was organized in Sitapur led by District President Sarojini, and a 12-point memorandum was submitted addressed to the Governor.

A march and meeting was held at BKT Tehsil in Lucknow led by AIPWA Convener Meena Singh. Women who spoke at the meeting condemned the attacks on women's freedom and equality across the country, especially in Uttar Pradesh, and said that despite all attempts by Manuvadi fascist forces, women will fight back win their rights.