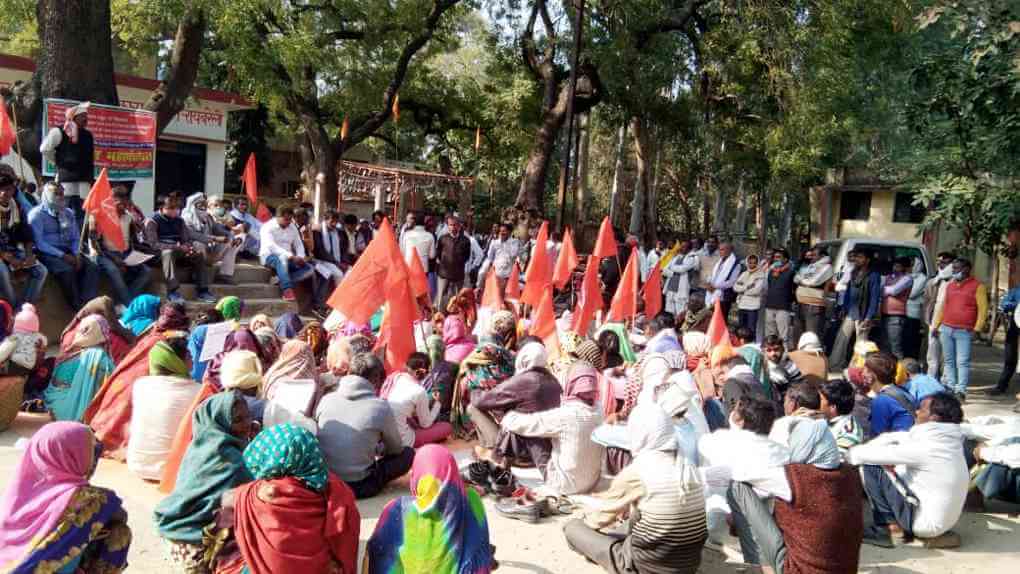 Protest programs were organized in various Districts of Uttar Pradesh on 26-27 November in support of the countrywide workers’ strike called by trade unions and the farmers’ ‘Dilli Chalo’ protest.

On 26 November protests were held at Jakhaniya, Jamaniya and Saidpur Tehsils and Karanda Block in Ghazipur District. Addressing the protest at Jamaniya, Kisan Mahasabha National President Ishwari Prasad Kushwaha said that farmers from across the country are proceeding to Delhi to protest against the draconian anti-farm laws inflicted by the Modi government. The Modi and Khattar governments have unleashed brutal repression on the farmers going to Delhi. He demanded punishment for those who purchase crops below MSP under the Yogi regime in UP. District President Gulab Singh addressed the protest at Jakhaniya.

A protest rally in Rae Bareli was addressed by AICCTU State President Vijay Vidrohi who said that the Modi government and BJP are hell bent on pushing farmers and workers into corporate slavery but the people of the country would fight them tooth and nail. A memorandum was submitted to the President through the City Magistrate. A Kisan Mahapanchayat was held in Rae Bareli on 27 November addressed by Vijay Vidrohi, Phool Chand Maurya, Afroze Alam, Ravi Shankar, Savita, Ansar Ahmed, Santosh Kumar and others.

CPIML Uttar Pradesh State Secretary Sudhakar Yadav said the country can survive only if farmers and workers survive. The Modi government wants to snatch away trade union rights that were won after decades of struggle and hand over agriculture and industry in the country to a handful of crony capitalists. But democratic and patriotic forces in the country will never allow this to happen.