AICCTU Thanks People for Resounding Success of General Strike 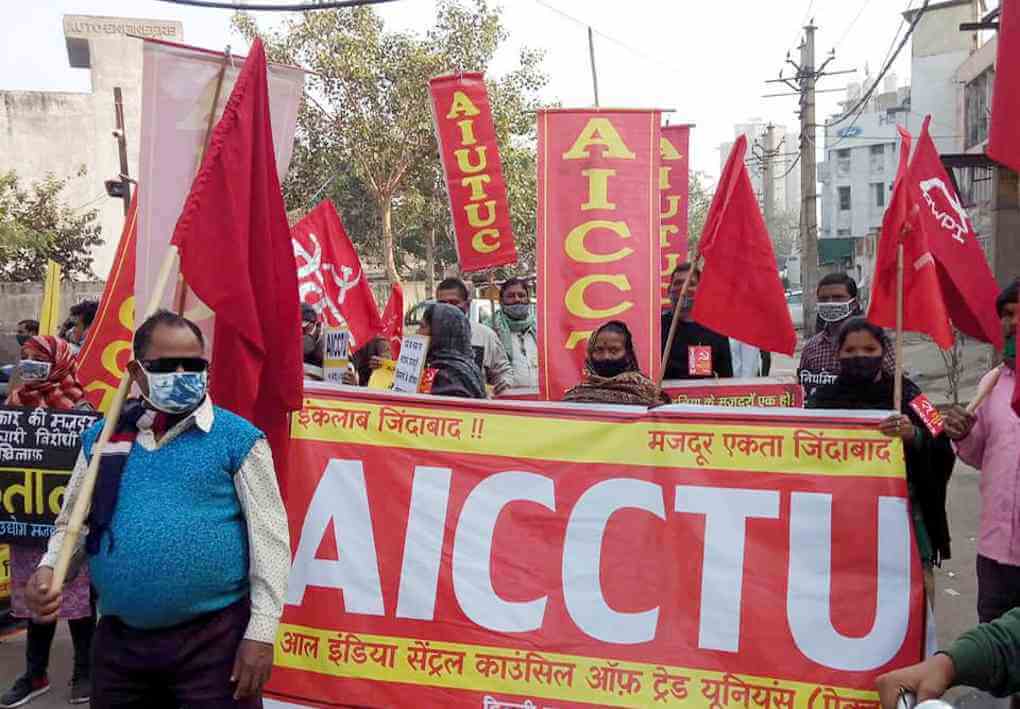 The countrywide general strike call given by trade unions including AICCTU, AITUC, CITU, INTUC, AIURUC, TUCC, HMS and SEWA to protest against the Modi government’s assault on farmers and workers, 4 anti-labor codes, 12 hour working day, 3 anti-farm laws, selling of national assets, Adani-Ambani Company raj, attacks on democracy and Constitution, unemployment and inflation, a rally was organized from Patna Junction to Dak Bungalow Chowk where a protest and blockade was held for hours on 26 November.

Hundreds of workers led by AICCTU protested at the Patliputra Industrial Area against the Modi government’s anti-worker laws and demanded that they should be revoked. They also demanded scrapping of the Fixed Term Employment implemented in Bihar. Protests were also held at Masaurhi station where the Palamu Express and Jan Shatabdi Express were stopped for hours. Protests were also organized at Maner, Nagar Panchayat led by Sudhir Kumar against the full privatization and contractualization of sanitation workers.

AICCTU National Secretary Ranvijay Kumar said that ASHA, Anganwadi, Rasoiya and other scheme workers came out on the streets at various places to demand government employment status and other rights for scheme workers including Rs 21,000 honorarium and ending the contract-outsourcing system.
The Countrywide Strike witnessed Rasoiyas (mid-day meal workers), construction workers and unorganized sector workers participate in the strike in all states. A Rally by AIKM and AICCTU at Gunupur and Padmapur towns in Rayagadha, Odisha saw huge participation, while a similar rally and picketing of workers at Sachindra Chandra Tea Garden, Khoribari, Darjeeling was held in this part of West Bengal. Similar protests and blockades were held all over the country. Bharat Bandh and the strike was held in Koraput town by workers, and the AIKM, AICCTU and AIARLA also held a joint rally at Gosani Block in Gajapati district of Odisha.

A rail Blockade at Soongachhi Tea Garden in Dooars, and a strike at Guwahati Refinery in Assam was observed. Strikes were held in Jharkhand at various places including DVC KTPS Koderma Power Plant, also by the Coal Mines Workers Union at Baniyadih. Processions were taken out in Bagodar and many towns in the state.

Bihar observed a massive support for the general strike with various programmes held in Arwal, Madhubani, Darbhanga, Purnea, Saharsa, Madhepura, Patna and all other districts. Workers strike was hugely successful in Uttar Pradesh.

All India Kisan Mahasabha (AIKM) General Secretary and All India Kisan Sangharsh Coordination Committee (AIKSCC) Bihar-Jharkhand in-charge Rajaram Singh said in a statement that farmers coming from Punjab were repressed in various ways by the government to stop them from reaching Delhi, but despite this lakhs of farmers have arrived in Delhi. He also demanded that the Bihar government should guarantee purchase of crops from all farmers at the Minimum Support Price (MSP).
Workers in Allahabad participated vigorously in the All India strike called by trade unions on 26 November. As per the announced program, the strike was well implemented in LIC. At 1 pm the rally commenced, led by NCRES leaders Alok Sahgal and Satya Narayan, AITUC leaders Ram Sagar and Naseem Ansari, INTUC leader Devendra Pratap Singh, CITU leaders Ravi Shankar Mishra, Harischandra Dwivedi and Avinash Mishra, AICCTU leaders Anil Verma, SP Bahadur and Kamal Usri, AIUTUC leaders Rajvendra Singh and Nirmal Mishra, SGCF leader Subhash Pandey, Adhivakta Manch leaders Pramod Kumar Gupta and Saeed Siddiqui, AILU leaders Ashutosh Tiwari and Mata Prasad Pal. The rally started from LIC gate with slogans and placards against the Modi government’s anti-worker policies and culminated in a meeting at AG office. The meeting was addressed by Subhash Pandey, Kamal Usri, Avinash Mishra, Ram Sagar, Sunil Maurya, and other leaders. Thousands of workers attended the rally and meeting.

Protests in Haldwani, Uttarakhand was held by various unions and organizations jointly as part of the all India general strike. Addressing the meeting at Buddha Park, CPIML Uttarakhand State Secretary Raja Bahuguna said that through this countrywide strike, farmers and workers have sounded the clarion call for the exit of the anti-farmer anti-worker Modi government. Today on Constitution Day farmers and workers have made it clear that just as the British Company Raj was driven out, today’s new Company Raj will also be thrown out through a decisive battle. AICCTU State Secretary KK Bora said that the Modi government is selling off factories, corporations and all national assets. They have also ended 44 laws that were in workers’ interest. All this is being done for the benefit of crony corporate capitalism and to push workers and farmers into bonded slavery. Our battle is against this new system of enslaving workers and farmers.

All India Kisan Mahasabha Uttarakhand President Anand Singh Negi said that the need of the hour is that farmers and workers support each other’s struggles against the Modi government and make it pay heavily for its anti-farmer anti-worker policies. Labor leader PP Arya said that the country can achieve equality only through the leadership of the working class.