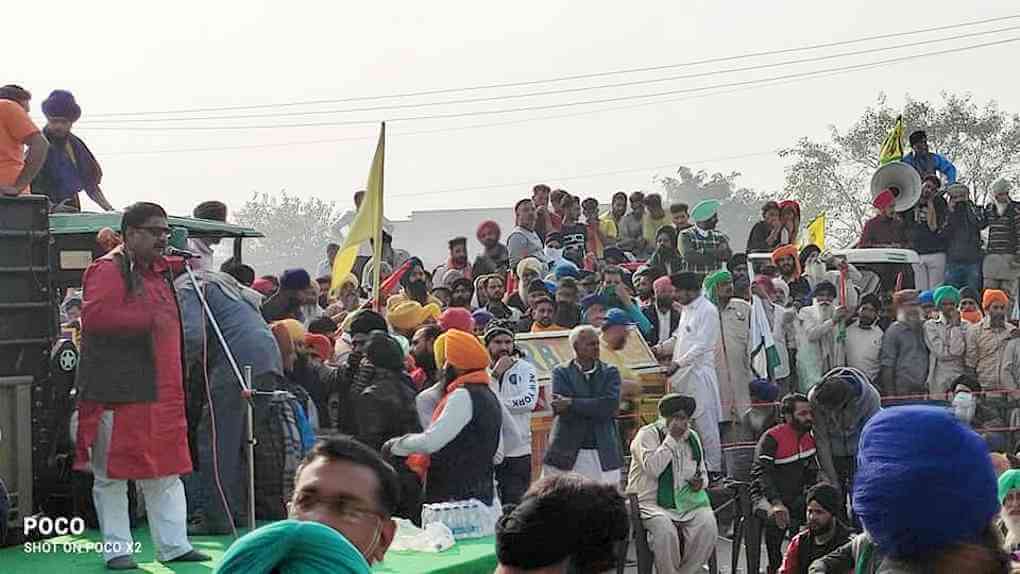 On 30 November, a CPIML delegation comprising AIPWA Secretary and CPIML Politburo member Kavita Krishnan, All India Kisan Mahasabha leader and Bihar MLA Sudama Prasad and AISA National General Secretary and Bihar MLA Sandeep Saurav visited the agitating farmers at the Singhu border. Comrade Sudama addressed the farmers’ sit-in on behalf of Bihar’s peasant movement, telling them of the solidarity actions that Bihar’s farmers and agricultural workers are holding. Comrade Kavita addressed the gathering on behalf of the women’s movement, and hailed the sit-in as the “farmers’ Shaheen Bagh.” She said that the Government is demanding that the farmers lift the sit-in as a pre-condition for talks: rather the Government should lift the three anti-farmer laws as a precondition for talks.

Comrades Sudama Prasad, Sandeep Saurav and Kavita Krishnan then walked for several miles along the highway, meeting and speaking to the farmers who have camped there. They were accompanied by CCM Comrade Kanwaljeet who is part of the farmers’ sit-in, and several AISA and AICCTU activists who are running a medical camp at the Singhu border.

Comrades Sudama Prasad and Sandeep Saurav addressed the farmers at Tikri border on 1 December, after which they met the farmers who were sitting in groups near their tractors and trollies. After meeting many groups of farmers, the team sat near the tractor-trolley of Gurnam Singh which also functions as the camp-office of the Kisan Mahasabha.

At Tikri , the AISA comrades energized the farmers with their revolutionary songs. Farmers were happy to see MLA Sandeep Saurav sit on the ground, playing the dafli and singing along with his comrades, with MLA Sudama Prasad also in close attendance. This was followed by another small ‘nukkad sabha’ (street meeting) addressed by both the MLAs. Now the farmers from Haryana and the common people are open in their support for the agitating farmers. Haryana farmers went around the entire day raising slogans and encouraging and inspiring the movement. They brought vegetables, fruits, milk, lassi, tea, jalebis, biscuits and prepared food from the villages and served these to the protesting farmers, who normally cooked their own food. Moving about amongst these farmers who had left their homes seven days ago, it does not appear as if they would ever get tired. This time the Modi government will have to either bow down to the farmers or be removed from power.