Election Meetings in Bihar: The Government which had Evicted Poor is Sure to be Evicted by the Electorate 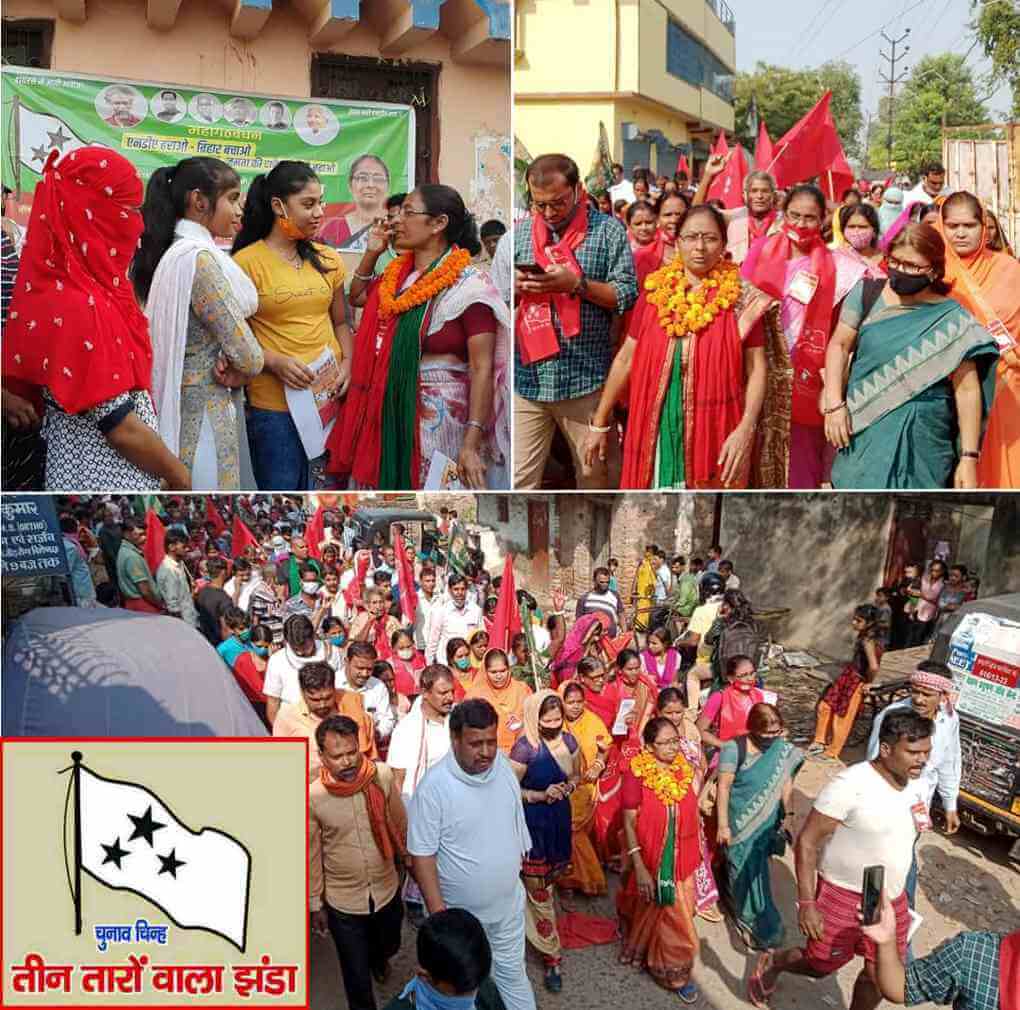 An election meeting was organized at Khalilpura-Punaichak in support of Mahagathbandhan-supported CPIML candidate Shashi Yadav on 27 October 2020. Addressing the meeting, CPIML General Secretary Dipankar Bhattacharya said that the people of Bihar are participating in this election in the form of a people’s struggle against the NDA and definitely this election will be a vote for change in Bihar. He further said that if the Mahagathbandhan wins, the task of resettling the poor whose huts the Nitish government demolished in the name of ‘development’ will be done on a priority basis. An employment guarantee scheme on the lines of MNREGA will be brought for the urban poor and each family will be given a guarantee of 200 days’ work. Sanitary and other workers are necessary for Patna city; the government which has evicted them is sure to be evicted by the electorate. The NDA government is bent on making life impossible for the poor by inflating the price of rations, oil, potatoes and onions. The people of Bihar will answer the insults heaped on them by throwing out the Nitish government.

Comrade Dipankar said that Comrade Shashi Yadav has emerged as a leader from ground struggles since her student days. She has fought for people’s issues, for women’s rights and ASHA-Anganwadi workers and micro-finance debtors; she was on the streets of Patna day and night during the struggle against CAA-NRC-NPR, and was on a hunger strike against the eviction of urban poor in the name of ‘Smart City’. He appealed to the people to vote for Shashi Yadav and send her to the Assembly.

Comrade Shashi Yadav assured the people that if elected, she would make Digha constituency a model for development.

Door to door campaigning and street corner meetings are also being done in support of CPIML candidate by activists of AISA, RYA and various other organisations.

Earlier in a statement CPIML General Secretary Dipankar Bhattacharya castigated the BJP-JDU government and expressed astonishment at Nitish Kumar’s statement that industrial development was not happening in Bihar because it lacks a sea coast. This is a ludicrous argument. The truth is that in the past 15 years the government evinced no will or intent in this direction. A sea coast is not suddenly and fortuitously going to become part of Bihar, so is Nitish Kumar saying that industrial development will never happen in Bihar?

He further said that Punjab and Haryana are States that are considered among the developed States of the country. They have achieved their development through the hard work of migrant workers from Bihar. The least Nitish Kumar could do is to ask these migrant workers how development is achieved. These workers are the people who go outside and develop other States, but their own State Bihar is lagging far behind in industrial development as well as other parameters. Not a single shut factory has reopened in Bihar over the last 15 years, and the incompetent Nitish government which never went beyond holding out false dreams is responsible for this. If sincere efforts had been made and a proper environment created, Bihar has enough man power to make it one of the best developed States in the country.

Along with workers, there is a sizeable migration of students and youth also. It is said everywhere that students from Bihar are excelling in all parts of the world and are developing other States through their hard work. They have contributed hugely to the development of Hyderabad as an IT hub in recent years. But Bihar has nothing to offer them. They are forced to migrate to other States for education. This so-called double engine government has proved such a failure that till date it has not been able even to secure Central University status for Bihar University, whereas this is one of the main demands of the people of Bihar.

Brain drain from Bihar is happening on a considerable scale. Migration of workers is also taking place. This is the truth, and this is why Bihar still remains a backward State.

The people of Bihar have understood this truth, and that is the reason their anger against the BJP-JDU on all fronts is at its peak. When students from Bihar were stranded in Kota during the Lockdown, Nitish Kumar refused to recall them home. The people of Bihar will never forget Nitish Kumar’s cruel and inhuman treatment of migrant workers who reached the borders of Bihar after waking thousands of kilometers. This time the people are going to evict such an arrogant government.