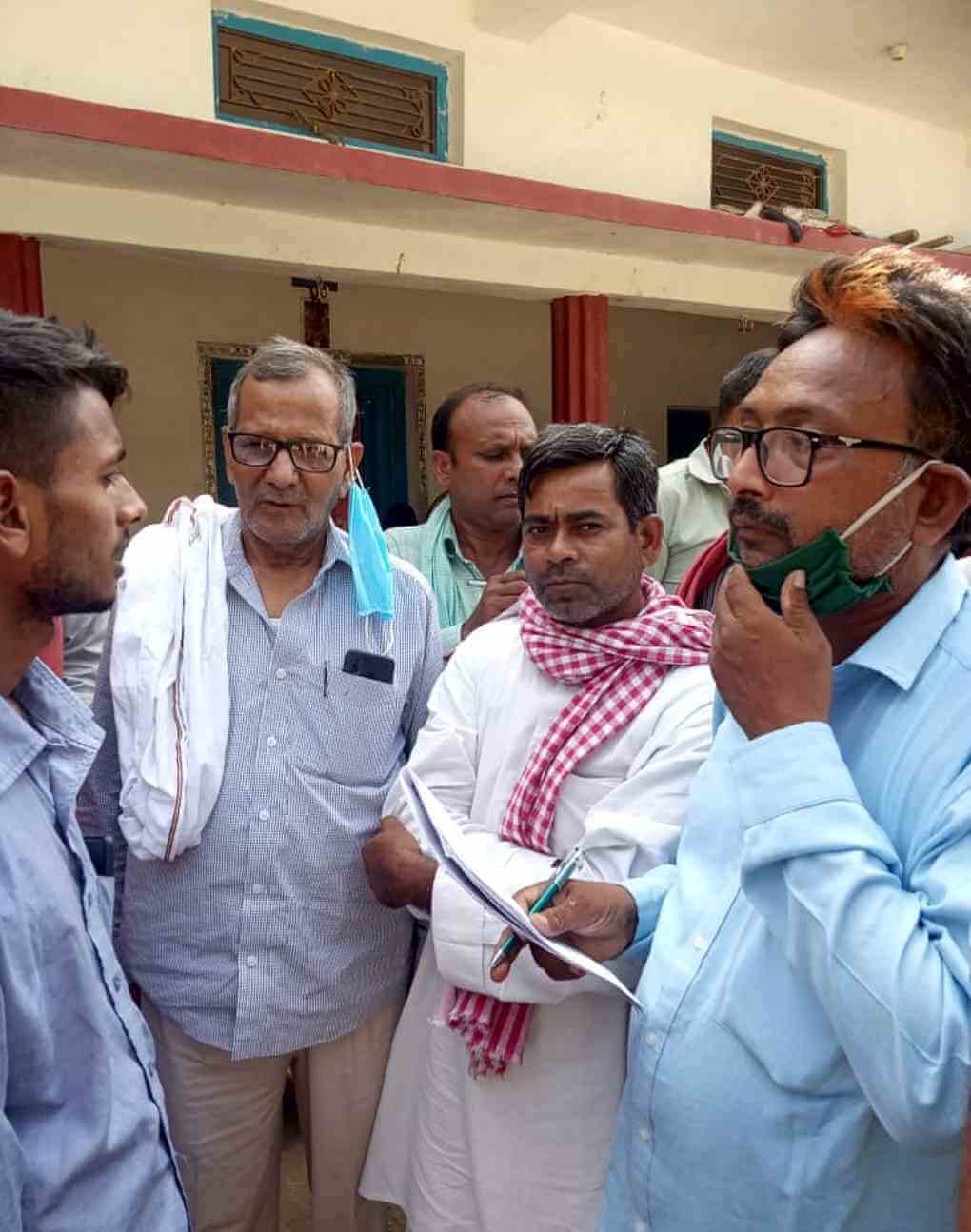 A 7-member CPIML team visited the site of the killing at Durjanpur in Ballia, UP and spoke with and consoled the family of Jayprakash Pal who was killed in the firing on 15 October 2020.

CPIML State Secretary Sudhakar Yadav released the team’s fact-finding report on 18 October 2020. Earlier, the team led by State Standing Committee member Lal Saheb visited the spot. Based on the report, Sudhakar Yadav said that the Yogi government is responsible for the killing. He pointed out that Chief Minister Yogi’s silence on Bairia BJP MLA Surendra Nath who openly defended the killer speaks volumes. This government’s undeclared policy is to protect dominant caste criminals and this has been exposed by horrific incidents from Hathras to Ballia, and tall talks of improvement in the law and order situation are proven to be false.

Sudhakar Yadav stated CPIML’s demands: strict punishment for the killers and justice for the victim; rescind Assembly membership of Bairia BJP MLA; Rs 50 lakhs financial aid to the victim’s family and a government job for one member of the family. He said that this MLA is openly mobilizing support for the dominant section, resulting in rampant fear and apprehension in the area. Adequate security for the victim family and immediate legal action against the MLA should be ensured. Accountability should also be fixed and it should be established under whose pressure the police released the main accused person after nabbing him immediately after the incident.

Citing the CPIML team report, the State Secretary said that the government ration shop in the village was allotted to Ram Kumar Ram who belongs to a Scheduled Caste. The allotment was first suspended through the influence of Dhirendra Singh who is close to the local BJP MLA, after which Dhirendra Singh wanted it to be allotted to his supporter Shailendra Dhobi. However, Munna Paswan was also a contender for the allotment and a rival of Shailendra Dhobi. All the poor people of the village including Jayprakash Pal were in support of Munna Paswan, and this was not acceptable to former army man Dhirendra Singh. On the eve of the allotment day (14 October) he went around the poor basti of the village threatening that if anyone votes against our candidate (Shailendra Dhobi) the consequences will be dire.

The next day voting for the allotment started in the presence of SDM Bairia and other police personnel. When the SDM asked for Aadhar card and voter ID for casting votes, many people supporting Dhirendra Singh who did not have these identity proofs wanted to cast their votes. Supporters of Munna Paswan objected to this, upon which supporters of Dhirendra Singh started pushing and shoving and stone pelting, which was obviously pre-planned. Meanwhile, Dhirendra brought his licensed revolver from his house and started firing, killing Jayprakash Pal on the spot. What is astonishing is that not only did the SDM, CO and other police personnel present on the spot remain silent and helpless spectators, but according to eyewitnesses they also helped the criminals to escape.

Sudhakar Yadav said that BJP MLA Surendra Singh and other BJP leaders are shamelessly defending the criminal killers by saying that the shots were fired in self-defence. This is a lie being spread by them, whereas the truth is that it was a one-sided violence perpetrated by the killers. The administration has abjectly bowed down to the BJP. This incident was not a sudden happening but a result of the unholy ruling dispensation-BJP-