TWO months have passed since the announcement of Lockdown to combat the Covid pandemic. The pandemic-induced crisis has been felt sharply with each passing day. On the basis of the circular issued by the administration, the AIPWA and AICCTU Udaipur units started relief from the very first day and sent a list of needy families in bastis to the administration for distribution of ration kits. The appalling situation of the poor in bastis and villages became evident as the Lockdown progressed. In addition to requesting ration kits from the administration, party also contacted other institutions and made arrangements for rations and food. Arrangements were also made for permission and transport costs for migrant workers and persons of low income groups from other States. Food and water was also arranged for migrant workers passing through Udaipur in their attempt to reach home.

As we started receiving messages from organizations about needy people in other bastis and villages, our field of work also expanded. Party’s district unit prepared lists of needy families with the help of local anganwadi workers, ASHAs, sanitation workers and democratic-left thinking people. During this work we were able to identify many new areas. The lists which were initially in the hundreds increased to thousands, who are consistently being provided with relief materials according to their needs. Inter-state migrants were identified and helped separately through government and private institutions. Among these migrants are 13-14 year old children from Balrampur District who had come to work with their elders during the school vacations. AIPWA and AICCTU activists also helped, and continue to help, Industrial Area workers, brick kiln workers, construction workers, agrarian workers, and daily workers in far-off villages like Kotada and Chhavani. 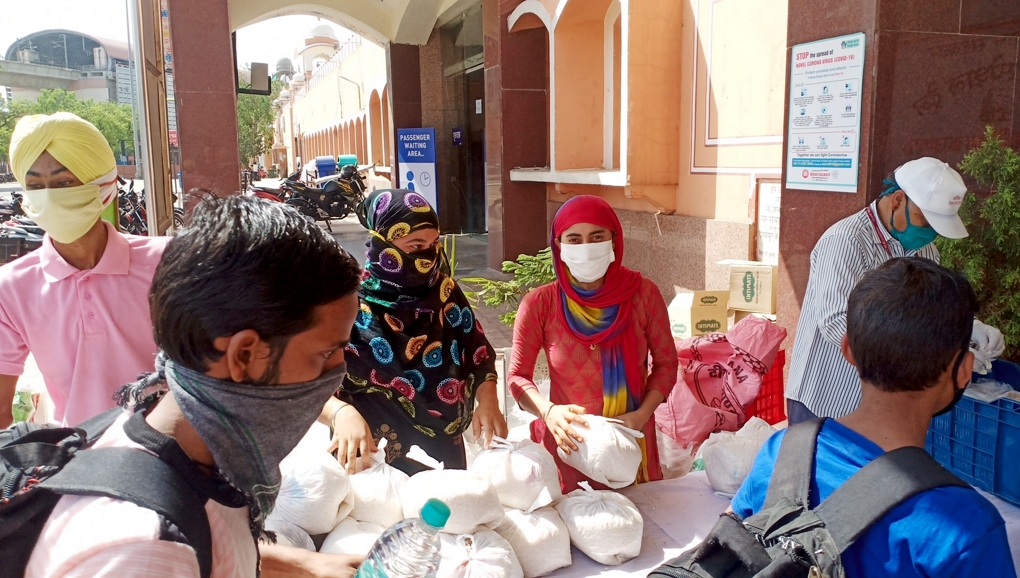 Members of people’s organizations collected funds which were used for rations, medicines, fuel, safety kits etc. for the needy.

In addition to helping migrant workers from other States go back home, we are also making arrangements for rations for those who wish to stay back in their work place. Our activists also tried to resolve emergency issues faced by the people due to the Lockdown, like death, illness, or police-administration-induced troubles.

Comrades in Udaipur and nearby villages responded to every call by the Party and people’s organizations to protest against anti-people policies of the government, and even protested during curfew while maintaining physical distancing. From the beginning of the Lockdown, AIPWA has been demanding that NFS beneficiaries should get other materials in addition to wheat as part of their rations. The government has made provision for dal, but AIPWA has demanded other materials like oil, masalas and sugar. We also demand that action should be taken immediately in areas where jaundice has broken out due to sewerage leakage as a result of digging and incomplete construction work as part of the Smart City project.

During this crisis of Corona pandemic, the people have seen that ruling parties have no intention of taking responsibility for even the basic minimum necessities of marginalized sections. The anti-people face of their leaders (from local leaders to top leaders) has been exposed; they try their best to obstruct work being done to help the people, and make contradictory statements which show their frustration. The people have understood diversionary tactics like plate-banging, candle-lighting, flower-showering, communalizing Corona virus, privatization, and toppling state governments instead of taking concrete and scientific steps to prevent and combat Corona. The positive side is that the crisis has sown the seeds of political awareness in the common people which are eager to germinate and grow.