All India Protest Against the Abrogation of Labour Laws 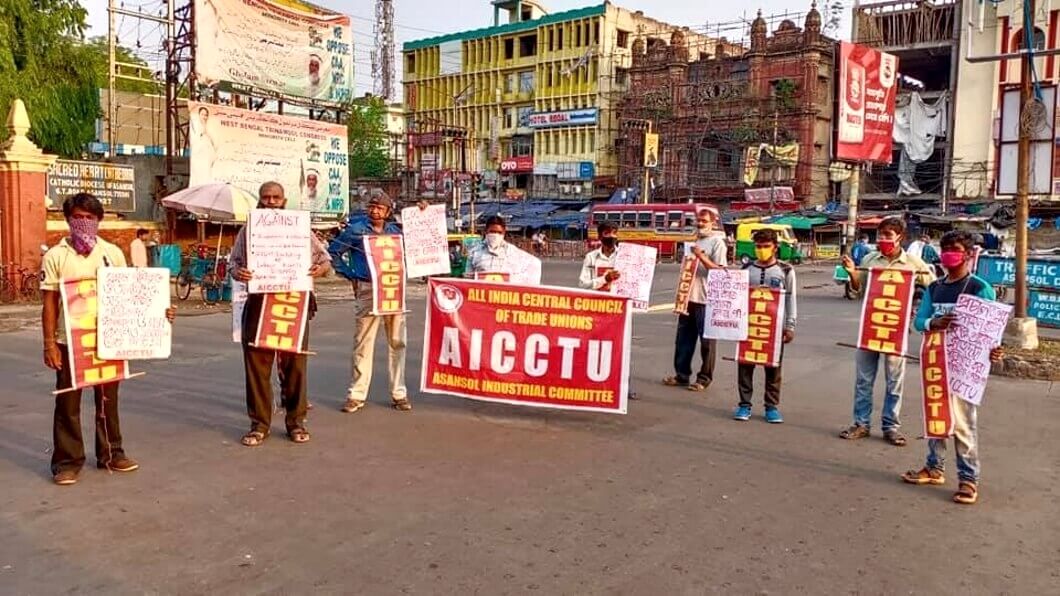 ALL India Central Council of Trade Unions organized countrywide two-day protests on 12-13 May against the abrogation of Labour Laws in the name of fighting the Corona pandemic in Uttar Pradesh, Madhya Pradesh, Gujarat and other States. Hundreds of workers from organized and unorganized sectors in Tamil Nadu, Karnataka, Uttarakhand, Delhi, Rajasthan, Punjab, Bihar, Jharkhand, West Bengal, Odisha, Telengana, Andhra Pradesh, Puducherry, Chhattisgarh, Assam, Gujarat, Maharashtra, Kerala and other States participated in the protests. The workers and activists protested from homes, union offices or from wherever this was feasible to maintain safe distances as per lockdown norms. They posted images and placards of protests over the internet. Various social media platforms were used to communicate as well as to hold live events. They raised their voice against the abrogation of the Labour Laws which gives free license to capitalists to make slaves out of workers.

#NoToSlavery #YesToLabourRights | Comrade Shankar, AICCTU President talks about the abrogation of laws laws in various states in India Rise and resist the Modi govt and BJP's attack on working class!

Posted by Communist Party of India -Marxist Leninist- Liberation CPIML on Tuesday, 12 May 2020

Comrade Shankar, AICCTU President talks about the abrogation of laws laws in various states in India Rise and resist the Modi govt and BJP's attack on working class! 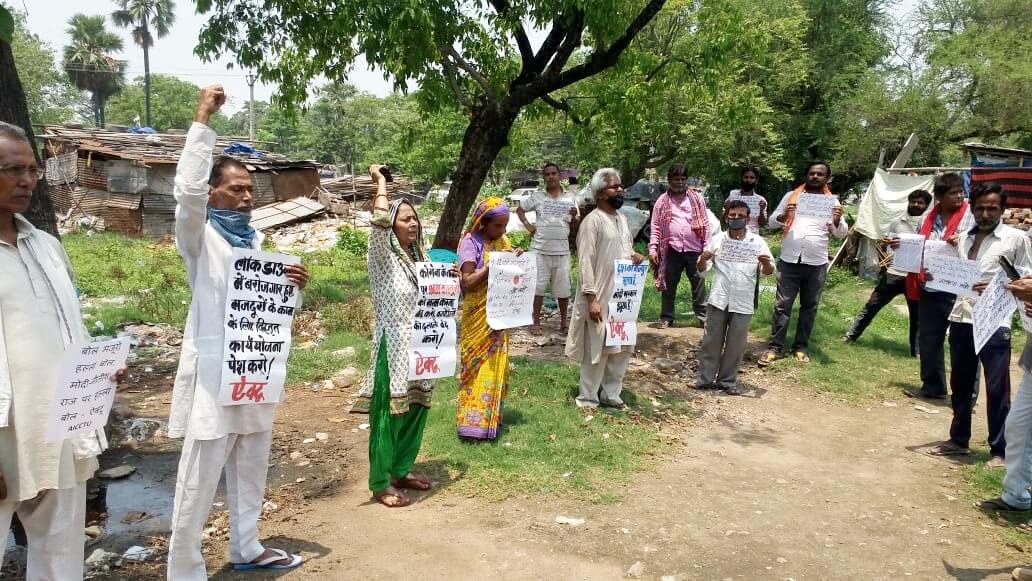 The unplanned Lockdown had already snatched away jobs and food from the workers, and now their rights are also being snatched. The avoidable deaths of workers during the Lockdown (at Aurangabad, Vishakhapatnam and on the roads while trying to walk home etc.) amounts to state-sponsored massacres. Workers were made to walk home thousands of kilometers without food, water or money. The trains were cancelled so that capitalists would not be deprived of cheap Labour post-Lockdown. After protests some trains were resumed but workers were made to pay train fares with surcharge. Workers demanding food or trying to get home were brutally lathi-charged by the police, as we saw in Surat and many other places. The deaths of many workers could have been prevented if labour laws had been strictly implemented. 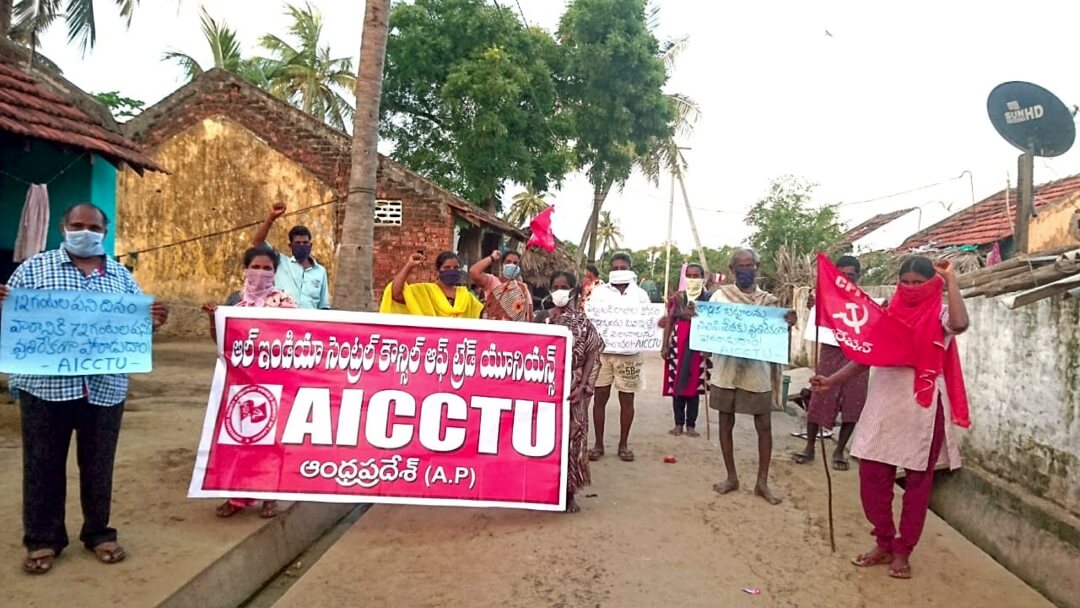 It was pointed out through these protests that the Prime Minister and Finance Minister had a flood of words in their addresses to the nation, but there was nothing at all announced for the workers. The protests at various places were done with placards, posters, slogans, masks, videos and other methods. AICCTU made the following demands: 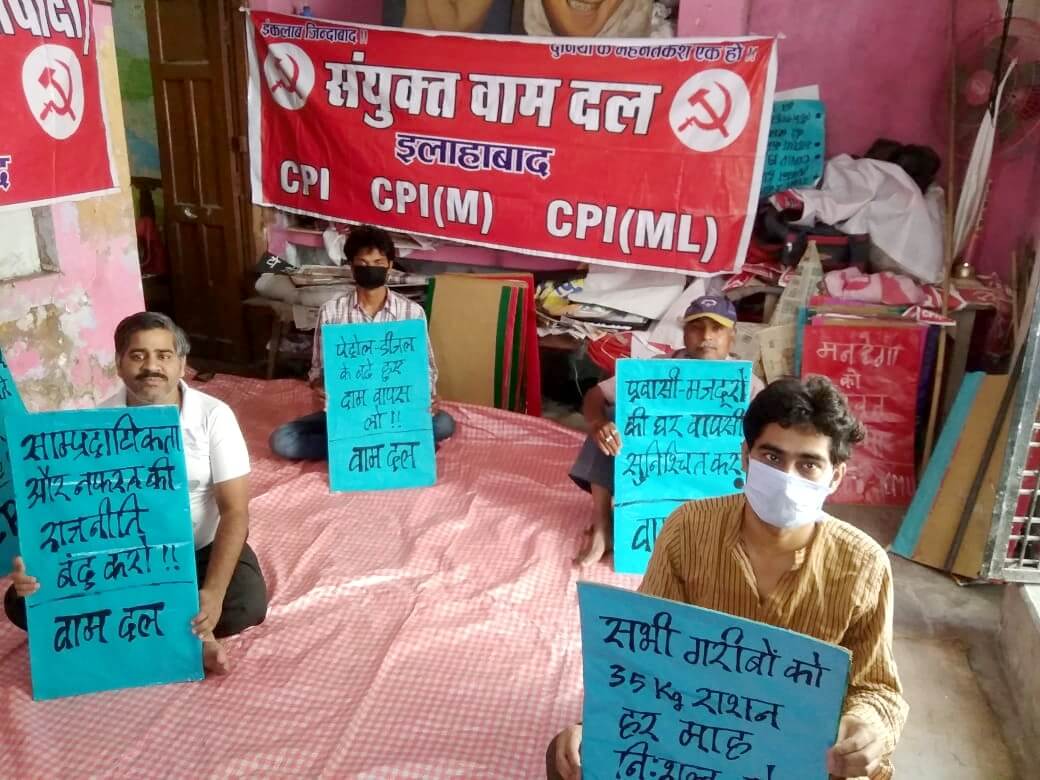 AICCTU in Uttar Pradesh also held protests on 11 May against Yogi government’s decision of labour laws abrogation. CPIML too joined this protest call.

Dr BR Ambedkar addressing a meeting of Labour Secretaries in 1945, had clearly said that industrial disputes will not occur only when workers are given the right to form their proper organizations and that they have their own organizations; workers will be given dignified minimum wages, and Labour reforms will be made in the interest of workers. Today many state governments have abrogated Labour Laws and given free license to industrialists is an act of repression directly in contrast to Dr Ambedkar’s views. 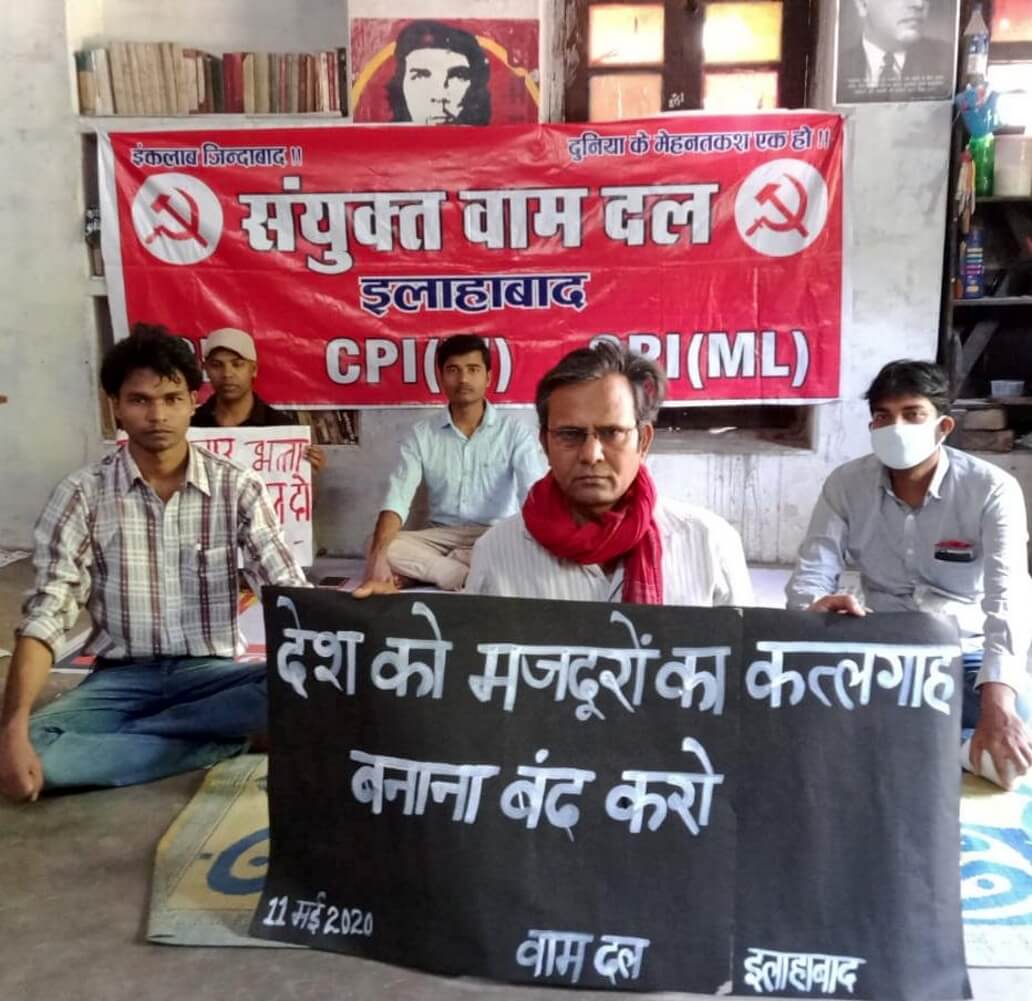 Workers had secured some rights through Labour laws after innumerable sacrifices and sufferings but the Yogi government in UP and other state governments too have shamelessly abrogated them in a dictatorial manner saying that this will help industrialists to run their industries and factories in the times of Corona. This is an open license for enslavement of workers. At the call of AICCTU and CPIML, dharnas were held across the State to demand repeal of the abrogation of Labour Laws. The peaceful dharnas, while observing Lockdown rules and physical distancing, paid tributes to the workers killed in the Vishakhapatnam gas leak and the workers mowed down by a train at Aurangabad. The dharnas were held at homes and Party offices from 10 AM to 4 PM. 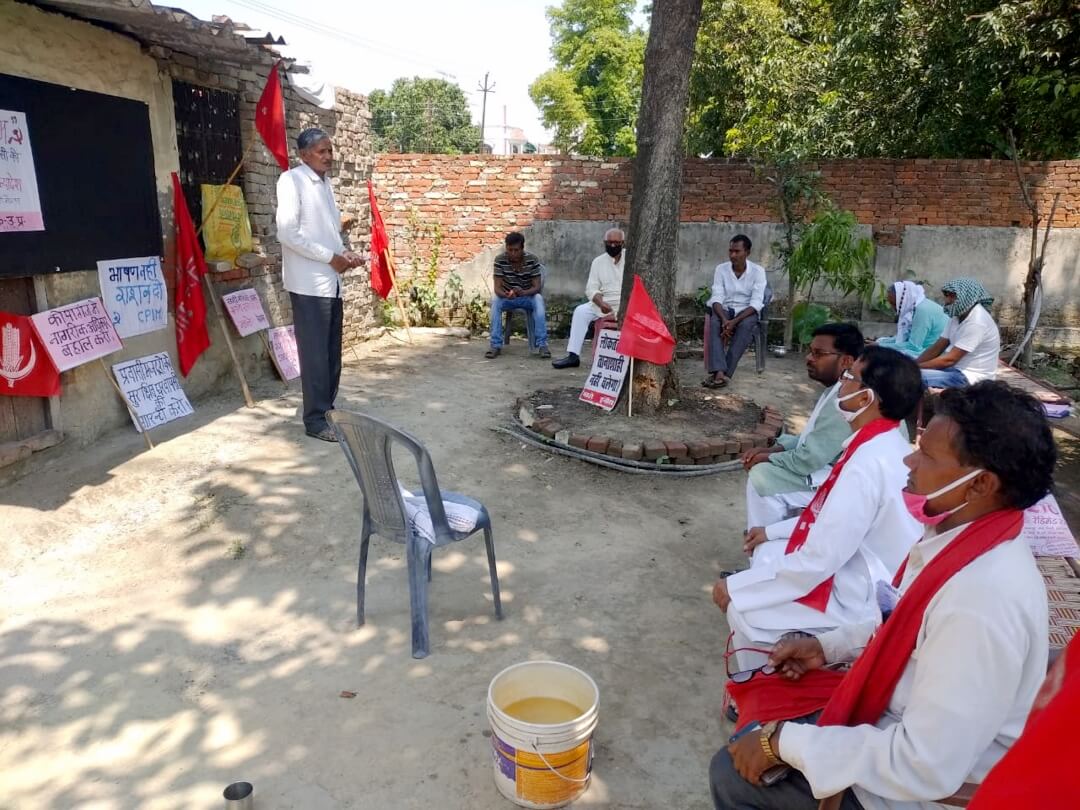 The AICCTU said that accountability should be fixed for the deaths in Vishakhapatnam and Aurangabad as well as the deaths on the roads of other migrant workers. Memorandums to the Prime Minister and Chief Minister were sent with demands for safe return home of migrant workers, compensation for families of the deceased, and Lockdown Allowance as well as other demands.
Dharnas were organized in various Districts of Uttar Pradesh on 11 May in response to the state level call given by Left parties CPI, CPM, CPIML and Forward Bloc. Memorandums were sent to the Prime Minister and the President with the above demands. 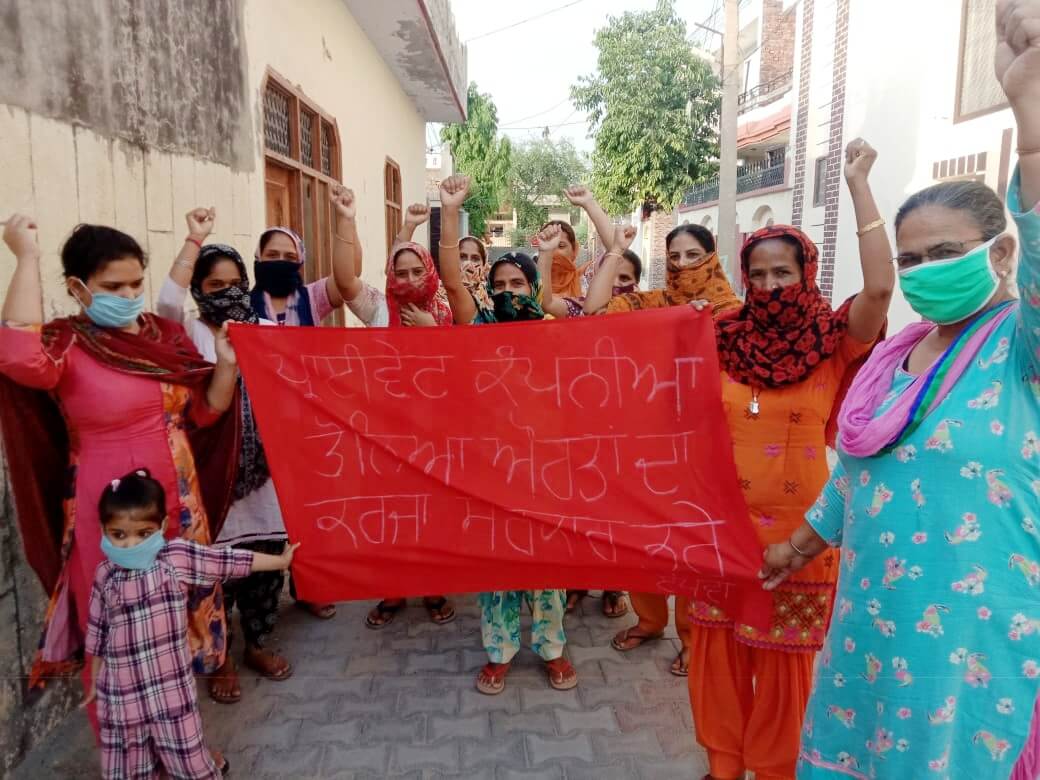 The Joint Platform of Central Trade Unions and Federations/Associations vehemently denounced the blanket exemptions given to all establishments from the employers’ obligation under all substantive labour laws by many state governments.

Central Trade Unions issued an statement which said that these moves as an inhuman crime and brutality on the working people, besides being gross violation of the Right to Freedom of Association (ILO Convention 87), Rights to Collective Bargaining (ILO Convention 98) and also the internationally accepted norm of eight hour working day – espoused by Core Conventions of International Labour Organisation (ILO). The ILO Convention 144 in regard to Tripartism has also been undermined by the Government.

The Central Trade Union organisations termed this move as imposing slavery on the workers and employees in the interests of the employers’ class and said that they will lodge a complaint to ILO on these misdeeds of the Government of India for gross violation of Labour Standards. 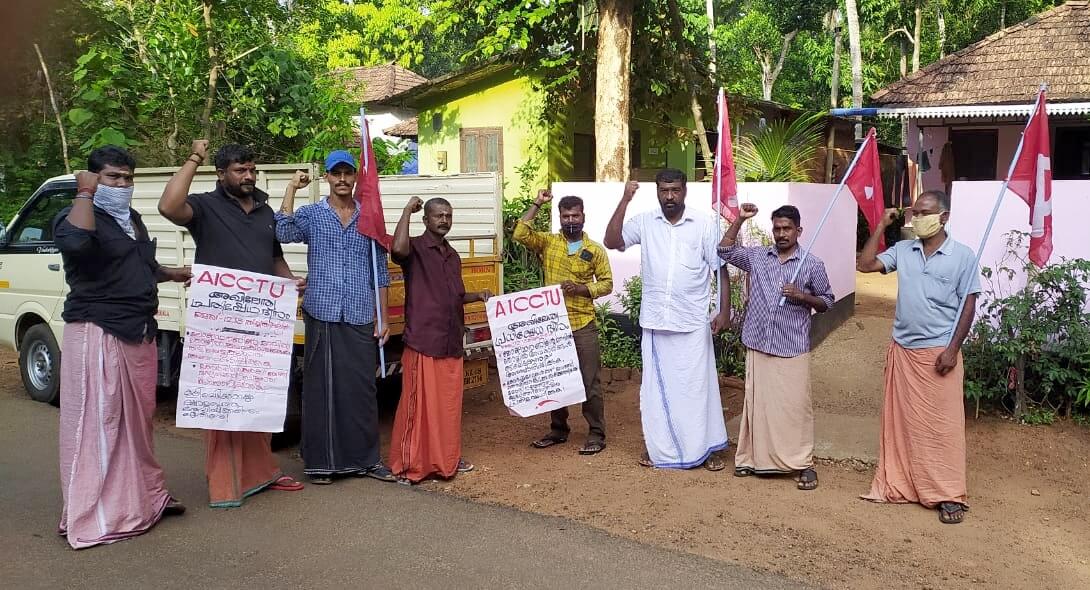