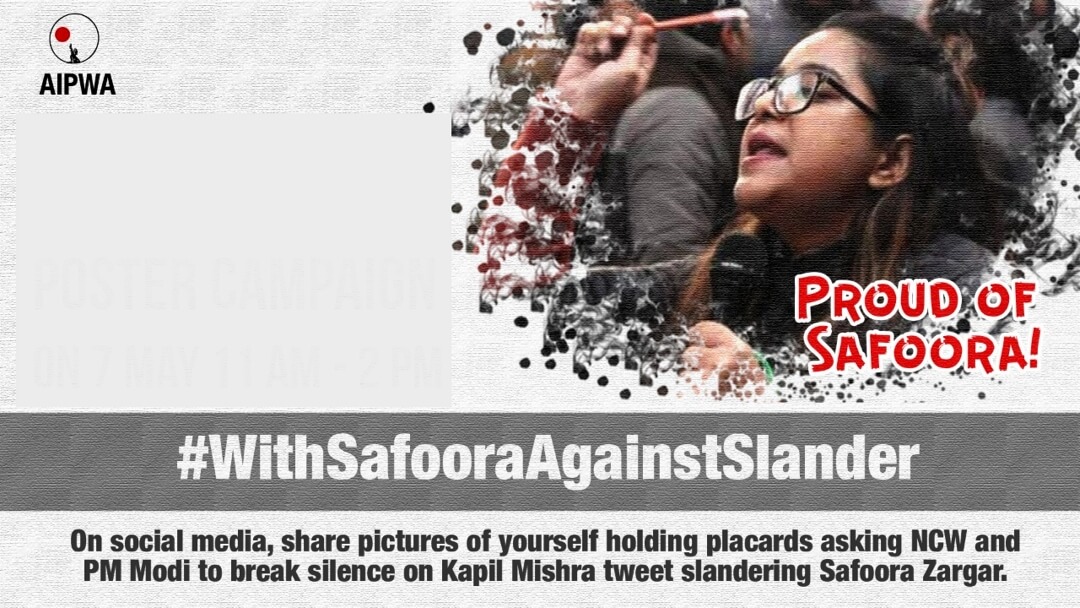 WOMEN'S organizations and women across the country showed remarkable solidarity with Safoora Zargar and held protests on 7 May 2020 to demand actions against those who are carrying out false propaganda and vulgar comments against Safoora as well as other women student leaders who were active in the anti-CAA protests.

Safoora Zargar has been active in the anti-CAA protests. She has been arrested during the Lockdown under false charges of inciting the Delhi riots. At the time of arrest she was three months’ pregnant. When people raised the demand for her release on this basis, BJP leader Kapil Mishra and the BJP IT Cell started character assassination and vile comments against Safoora on social media. The Prime Minister of the country and the National Women’s Commission are silent in this matter. Therefore, women’s organizations are asking them why they are silent on Kapil Mishra’s vulgar comment on social media against Safoora’s pregnancy. Why is there no action against him? While pregnant women in orange and red zones are being asked to remain inside their homes for safety, why is the pregnant Safoora being kept in Tihar Jail in this time of Corona pandemic? Why has riot-inciter Kapil Mishra not been jailed? Why are anti-CAA activists Safoora, Ishrat and Gulfisha in jail?

Women sat in their own houses and did dharna from 11 PM to 2 PM. They raised these questions through placards, posters, slogans and videos. They said that the vulgar slander and character assassination against Safoora is an attack against all of us. Therefore, we are sending our love and solidarity to Safoora amidst this Lockdown. They demanded the release of anti-CAA protesters and action against Kapil Mishra.

Women activists from the Shaheen Bagh protests participated in large numbers in the dharna and sat in protests at various Shaheen Baghs including Phulwarisharif, Harun nagar, Ishopur, Nausa, and Khalilpura led by Roushan Khatoon, Asghari Khatoon, Amana Khatoon and others. 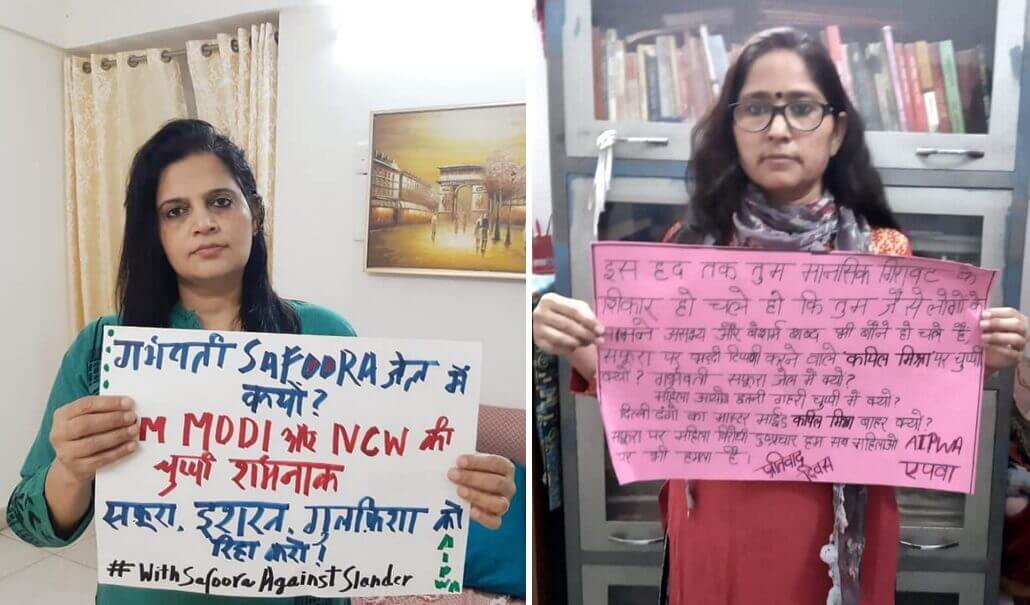 Women across Uttar Pradesh held dharna inside their own homes and raised the questions of justice for Safoora and other activists through placards, posters, slogans and videos. Prominent among leaders, intellectuals and activists who participated in the dharna were renowned Ambedkarite thinker and former IGP SR Darapuri, Naees Hasan, Farzana Mehdi, Nahid Aqueel, Rizwan Ali, Arundhati Dhuru, Akram Advocate, Nawajish Golvi, Mandakini Rai, Kiran Singh, Vandana Mishra and Urusa Rana. AIPWA leader Meena Singh said that the attack against Safoora is an attack against all of us. The protests held in Varanasi, Gorakhpur, Deoria and Lakhimpur Kheeri were led by AIPWA leaders Meena Singh, Kusum Verma and Krishna Adhikari. 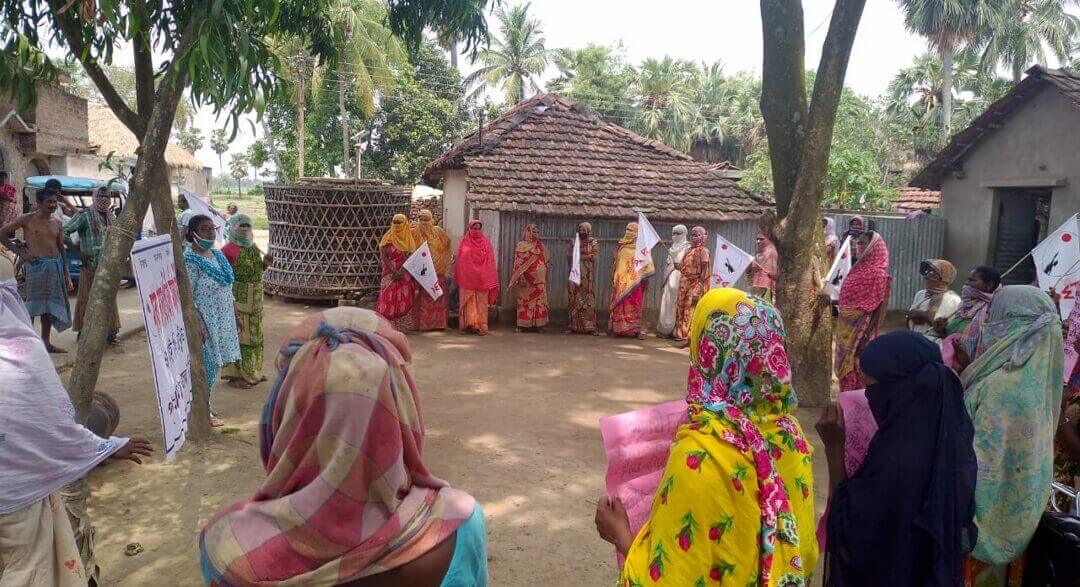 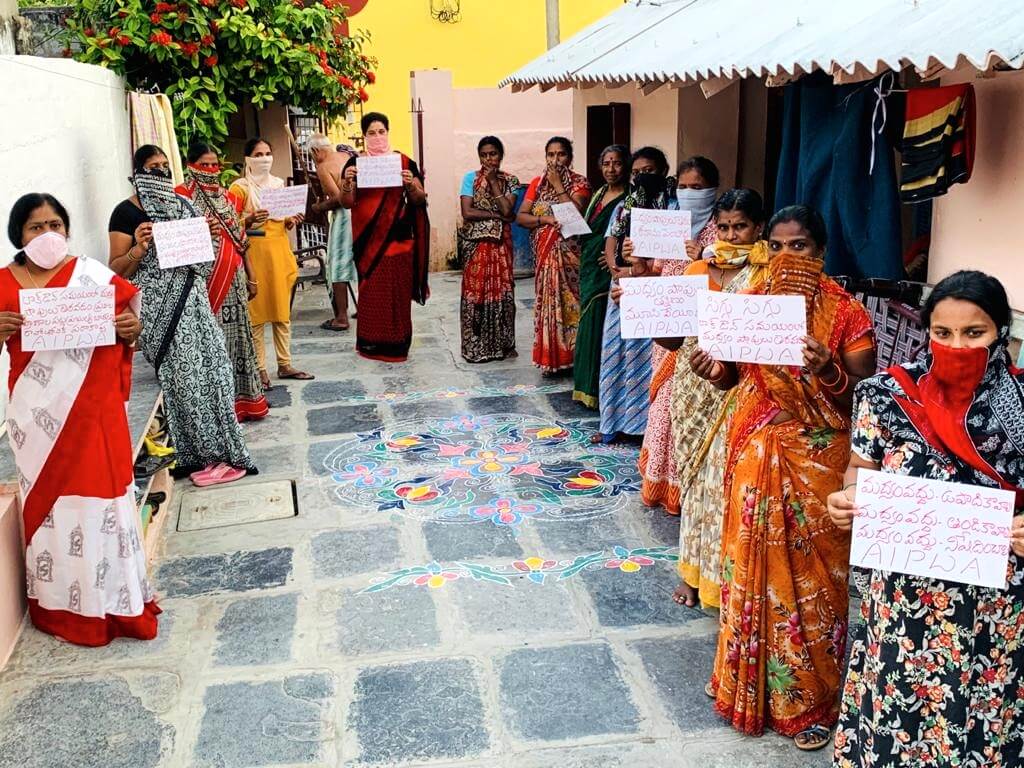 In Andhra Pradesh, protests were held at East Godavari, Krishna, Guntur and Karnool. Women also protested at Tinsukhiya and Nagaon in Assam. In Rajasthan the protests were effective, with dharnas at Udaipur and other places. AIPWA leader Shamim said that the vulgar vilification of Safoora exposes not only the anti-woman face of the BJP-RSS but also their so-called ‘Devi culture’. BJP-RSS are trying to push back the women’s movement at a time when the country is fighting the Corona pandemic.