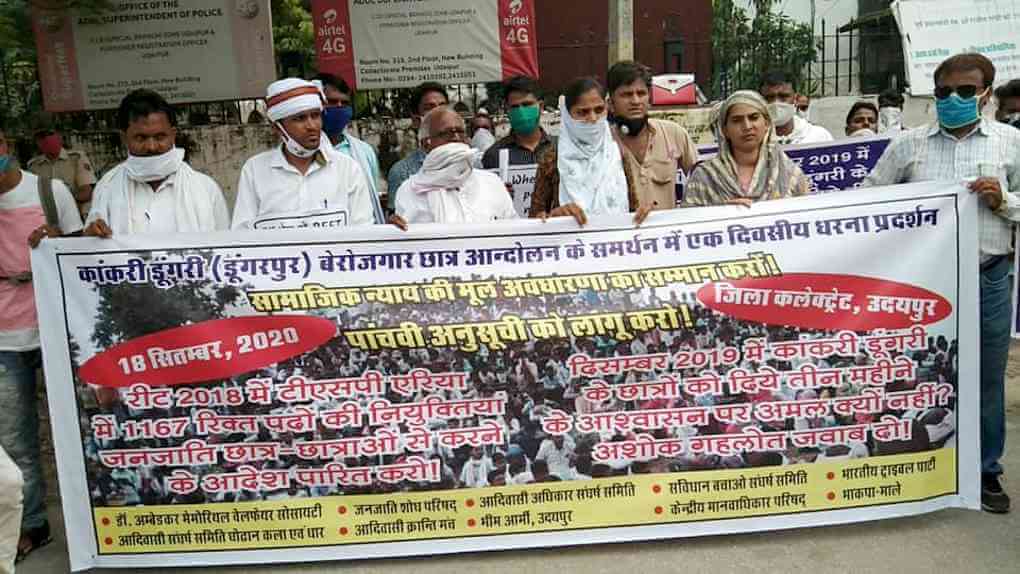 ST candidates in tribal districts of Rajasthan have for the past one year been demanding recruitment to the 1167 General category teachers’ posts lying vacant in Rajasthan; currently from 6 December they had been protesting peacefully at Kakri Dungri in Dungarpur districts. When the government remained insensitive and refused to listen to democratic ways of protest, the protesters came out on the highway on the 18th day and violence erupted. Though the violence was incited by outsider elements, many organisations demanded a free and fair enquiry and compensation to those who suffered losses due to the violence.

Senior CPIML leader Shankarlal Chaudhury said that the police are slapping cases and arresting totally innocent persons which is illegal and a violation of human rights and must be condemned strongly. Human rights activist Rinku Parihar said that more than 24 FIRs have been registered naming 7000 persons, many of whom were not even present at the spot. Bhim Army leader Dinesh Rayakwal said that innocent people including school children are being targeted due to local politics. AICCTU leader Saurabh Naruka said that so many FIRs naming such a huge number of people arouse suspicion prima facie. Adivasi Kranti Morcha leader Babulal Kalasua said that students, teachers and even doctors from the adivasi community are being targeted who have nothing to do with the violence. One student who was in Udaipur for the B.Ed exam has also been named in an FIR. CPI leader Himmat Chhangwal said that the administration is clearly trying to create an atmosphere of fear and intimidation in order to prevent people from protesting for their just demands. Prof RN Vyas said that BJP and its affiliated organizations are raising the bogey of ‘Naxalism’ and ‘outsiders’ in order to defame the movement and create a divide in the adivasi community. We condemn this strongly and demand that the State government should stop police repression on the just demands and movements of the adivasi community.

Left parties, PUCL, Jantantrik Vichar Manch, Samvidhan Bachao Sangharsh Samiti and Bhim Army have strongly condemned the police and administration for slapping false cases on innocent people, unleashing repression and crushing their constitutional rights in the name of probing the violence that erupted during the ST Teachers’ Recruitment Movement at Kakri-Dungri in Rajasthan.

Activists speaking at a meeting organized on the issue said that the people in the movement waited patiently for one year for the government to resolve the issue and then sat on a peaceful dharna at Kakri-Dungri (one km away from the highway) for 18 days in the hope that Chief Minister Ashok Gehlot or his representative would call them for talks in order to find a constitutional solution to the issue. But the administration and government kept giving unofficial dates and postponing them. This led to a situation where pressure from the people forced the protesters to jam the highway and outside elements found and grabbed the opportunity to incite violence in which the common people as well as the protesters suffered losses and injuries. The government was extremely tardy in bringing about a solution.

Now the movement has been suspended and peace restored after the government’s assurance that a constitutional solution will be found; but the police and administration are unleashing repression on innocent adivasis and violating their human rights. BJP leaders are raising the bogey of Naxalism and ‘outsiders’ to defame the movement and divide the adivasi society. This is their political trickery and must be condemned strongly. Present at the meeting were Prof RN Vyas (Jantantrik Vichar Manch), Prof Hemendra Chandalia (PUCL), Shankarlal Choudhury (AIPF), Rajesh Singhvi (CPM), Himmat Chhangwal (CPI), Dr Chandradev Ola and Saurabh Naruka (CPIML), Advocate PR Salvi (Samvidhan Bachao Sangharsh Samiti), Dinesh Rayakwal (Bhim Army), human rights activist Rinku Parihar and others.

The leaders said that soon a fact-finding team comprising PUCL and other organizations would visit the spot and submit their report to the government and the Human Rights Commission and would also demand action against the guilty administrative and police personnel.

They said that it is very unfortunate and objectionable that a video is being circulated on social media in which a police official, while patrolling on a state vehicle, is inciting the people of Khairwada to pick up stones in their hands.

The huge number of people named in the 25 FIR arouses suspicion prima facie. One FIR names more than 700 people while another names more than 450. Several FIRs name more than 100 people. In some cases persons not even present at the spot have been named in FIRs and are being arrested. Students, teachers, and even doctors from the adivasi community who are in no way connected with the violence are being targeted.

This is clearly an attempt to create an atmosphere of intimidation and terror to stop people from protesting for their just demands. This is not only illegal but also an assault on democratic values. Clearly, the police and administration are acting for political and social vendetta on a local level and not in an unbiased and impartial way.

A memorandum was submitted to the Chief Minister through the Divisional Commissioner regarding the indiscriminate way in which the police and administration are targeting innocent people after the violence that erupted during ST teacher recruitment movement at Kakri Dungri in Dungarpur District, and to listen to the Adivasis’ demand.