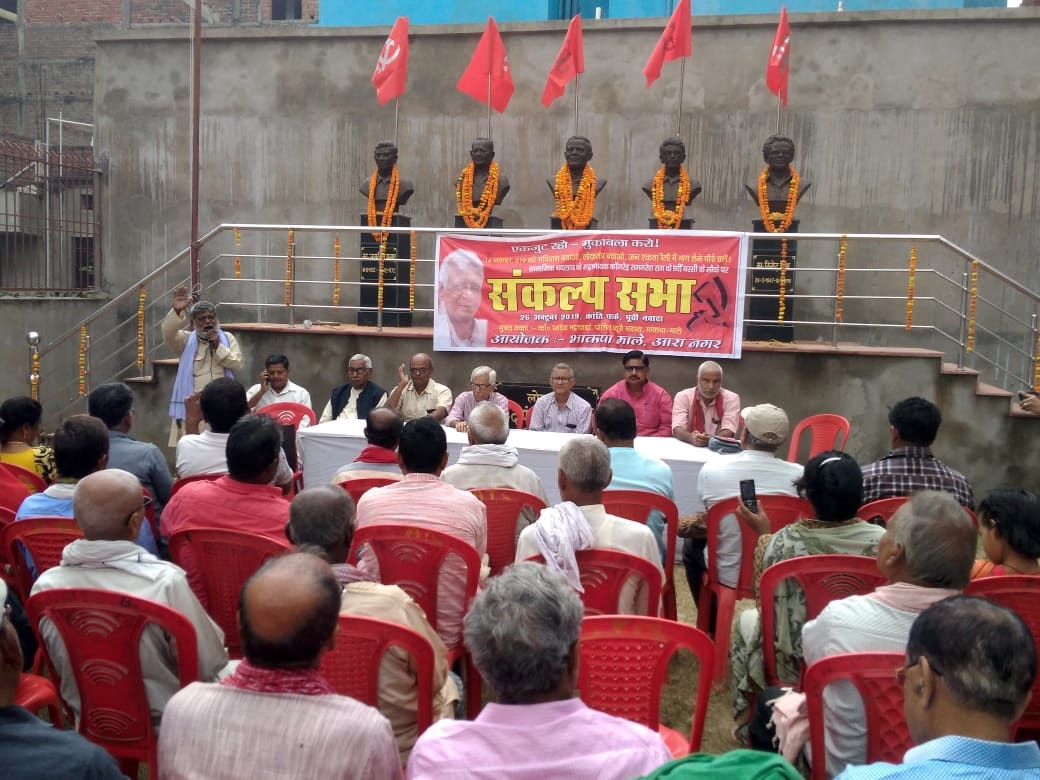 TRIBUTES were paid to CPIML founder-leader Comrade Ramnaresh Ram across Bihar including the CPIML State office on the occasion of his 9th memorial day on 26 October 2019, and the pledge taken to work to fulfill his dreams.

Addressing the memorial meeting organized at the Party State office in Patna, Politburo member Comrade Ramji Rai said that Comrade Ramnaresh Ram was a lifelong committed warrior for the freedom of workers, farmers, the oppressed and the deprived. His life is a source of inspiration for all of us. Senior leaders Brij Bihari Pandey, RN Thakur, State Committee members Ranvijay Kumar and Prakash Kumar, Lokyuddh Managing Editor Sant Lal, Vibha Gupta, Vishwa Mohan Kumar, Jitendra Kumar, Nishant Kumar, Kartik Paswan and many others were present at the meeting which was conducted by Comrade Rajaram.

Architect of the revolutionary movement of Dalit landless poor in Bihar, Comrade Ram Naresh Ram was a CPIML Politburo member and leader of the party's legislative group in Bihar Assembly from 1995-2010.

Parasji and Master Jagdish faced feudal violence when the former contested elections in 1967. They then became architects of CPIML in Bhojpur, feeling the need for a revolutionary Left movement to liberate oppressed Dalit landless labourers and end exploitation.

He joined CPIM, contested and won mukhiya seat of Ekwari panchayat in 1965. Feudal forces unleashed violence when he contested Assembly elections from CPIM in 1967. It is after this that he and Master Jagdish formed CPIML, and led the revolutionary peasants struggle. He was given the responsibility of CPIML Bihar State Secretary in the 80s. The Bihar State Kisan Sabha had been formed by Comrade Ramnaresh Ram, freedom fighter and people’s poet Comrade Ramakant Dwivedi ‘Ramta’ and other leaders.

Feudal terror outfit Ranveer Sena was a backlash to Ram Naresh Ram's victory as CPIML candidate from the Sahar seat in Bihar Assembly elections in 1995. For Dalits to vote and elect CPIML was seen as a challenge to feudal "honour".

Ram Naresh Ram's role as an MLA will always be a model for all communist legislators. He waged struggles inside and outside the Assembly against draconian laws, patronage to terrorist Ranveer Sena, supervised public works to end corruption. As an MLA he did everything possible to improve irrigation resources and always spoke up for comprehensive land reforms and rights of agricultural workers, sharecroppers, small and middle farmers. After he became an MLA he built a beautiful memorial to honor the farmers martyred in 1942. He had a deep respect for farmers’ revolts and struggles.

Comrade Ram Naresh Ram was the Swami Sahajanand Saraswati of independent India - both lit the revolutionary spark of political anti feudal assertion in the most oppressed sections of society.

Thanks to struggles that Comrade Ram Naresh Ram led, dalit-backward rural poor of Bihar achieved their basic democratic right to vote for the first time since Independence. They elected representatives to Parliament and Assembly but also changed balance of forces in panchayats.