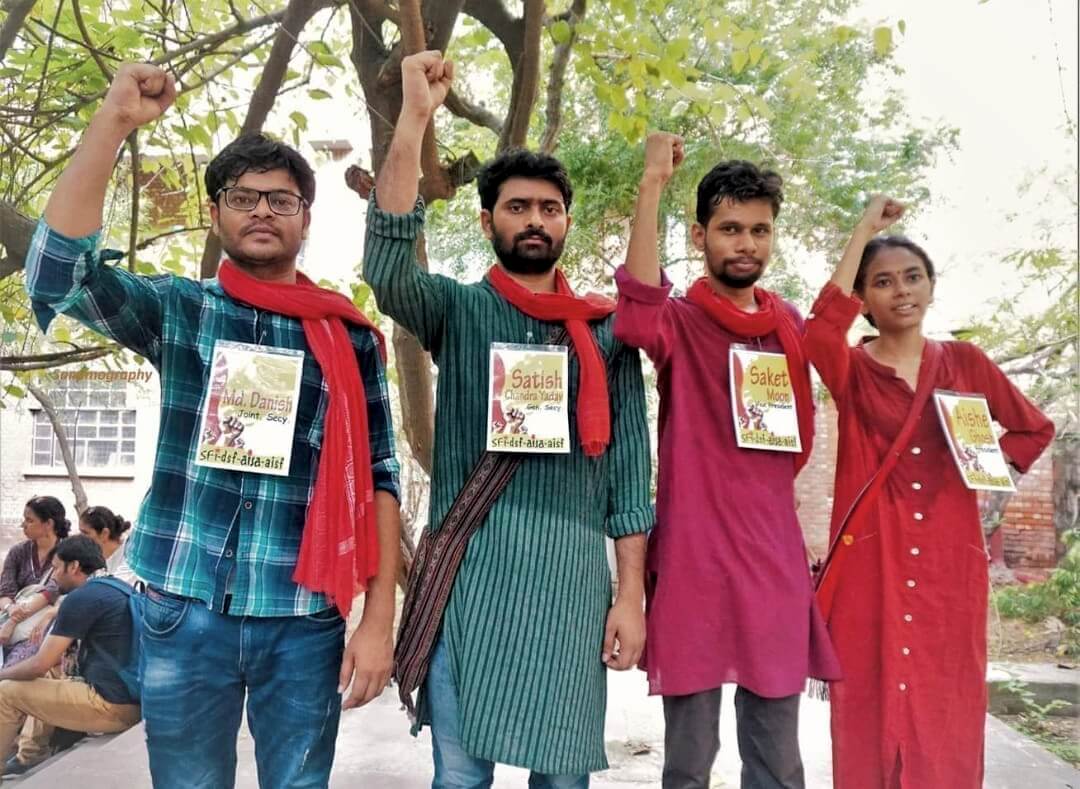 A vindictive Vice Chancellor + ABVP Grand Alliance know they can't win JNUSU, so they try every trick to derail JNUSU election. This year’s JNUSU elections saw a massive turnout of 67.9% of students participating with 5762 votes. The trends declared by the Election Committee clearly showed our campus’s mandate. JNU students have clearly made a point that this is a generation students who have been through the fascist fire, but have risen through by the fire of resistance. On 4/9/11, the last day of election campaing, we wrote in our leaflet: Fascists Always Fear Universities And Intellectuals. “The state has been conquered! But not yet the universities! The intellectual paramilitaries are coming in. Raise your flags!” - announced the Germany’s fascist student group after the Nazis took power in January 1933. Following this they went around organising public events to burn books, ransacked libraries and attacked teachers.

On 24 May, the day after Modi won a second term in 2019, a BJP General Secretary wrote in an op-ed in the Indian Express: “Under Modi-II, the remnants of the pseudo-secular/liberal cartel need to be discarded from the country’s academic, cultural and intellectual landscape.” Note the similarities with Nazi Germany! Save India’s Universities from being “conquered” by the fascists! 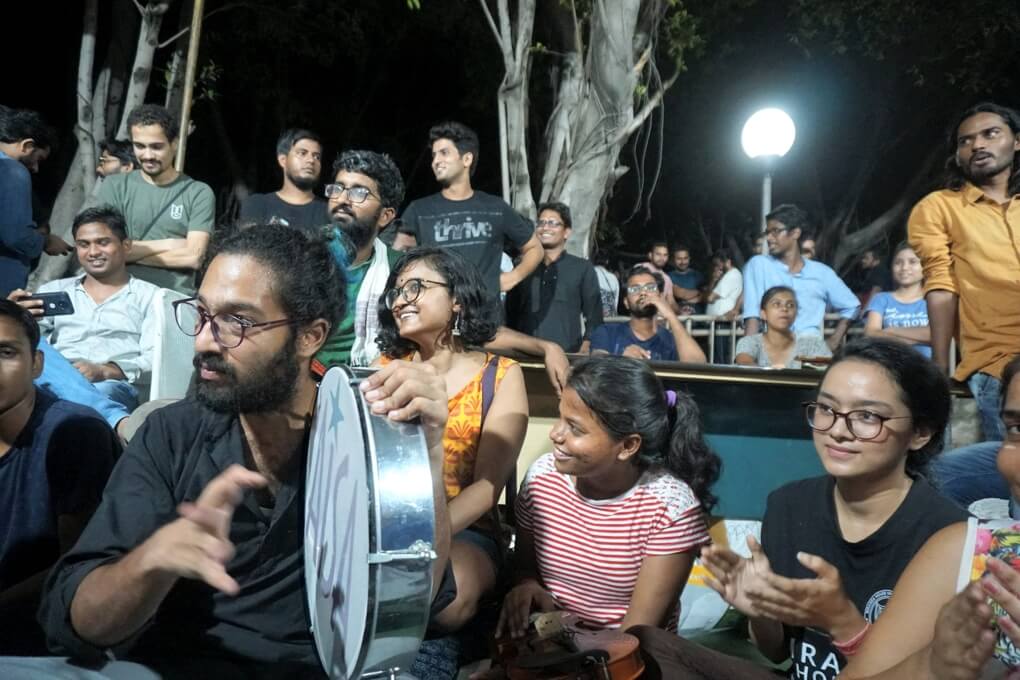 Friends, JNU student community has responded in unison and a struck a decisive blow to this fascist ambition. The present mandate is a loud warning to those who are conspiring to 'conquer' JNU by destroying all its inclusive policies and egalitarian features, running the campaign of “Shut Down JNU”, imposing hostel crisis, fund cuts, seat cut and mortgaging JNU through HEFA loan. It is a mandate to restore reservations, deprivation points, raise MCM and fellowships, defend GSCASH and gender justice. It is a mandate for library, hostels, against regimentation and signing of attendance sheets and for enhanced financial support and facilities for PWD students.

The emerging mandate is not just in favour of united Left panel - it's an assertion of thousands of JNU students united against a united panel of RSS, ABVP, the JNU VC, his administration and the Modi government. Mamidala-Modi’s repression and manipulation have only redoubled students’ determination, every inch, every moment. Not only JNU students, but JNU teachers too are being daily subjected to humiliation and indignities. This mandate is an assertion of the rights and dignity of students and teachers, academics and activists against the petty tyranny and tin pot dictatorship of Mamidala Jagadesh Kumar, the JNU VC, acting at the behest of the Sangh and BJP bosses. This is a mandate for Najeeb and Fatima Nafees; for Rohith and Radhika Vemula; and others who are witch-hunted, raided and arrested.

We congratulate JNU Students for keeping the fire of resistance alive. With Wisdom of Ambedkar and fire of Bhagat Singh we will continue to resist this fascist onslaught on our universities, democracy and the Constitution. For now rejoice the resistance as you all didn't bow down, and didn't let our conscience down. Indeed, it's a mandate for JNU and its undying spirit which gives every dictator sleepless nights. 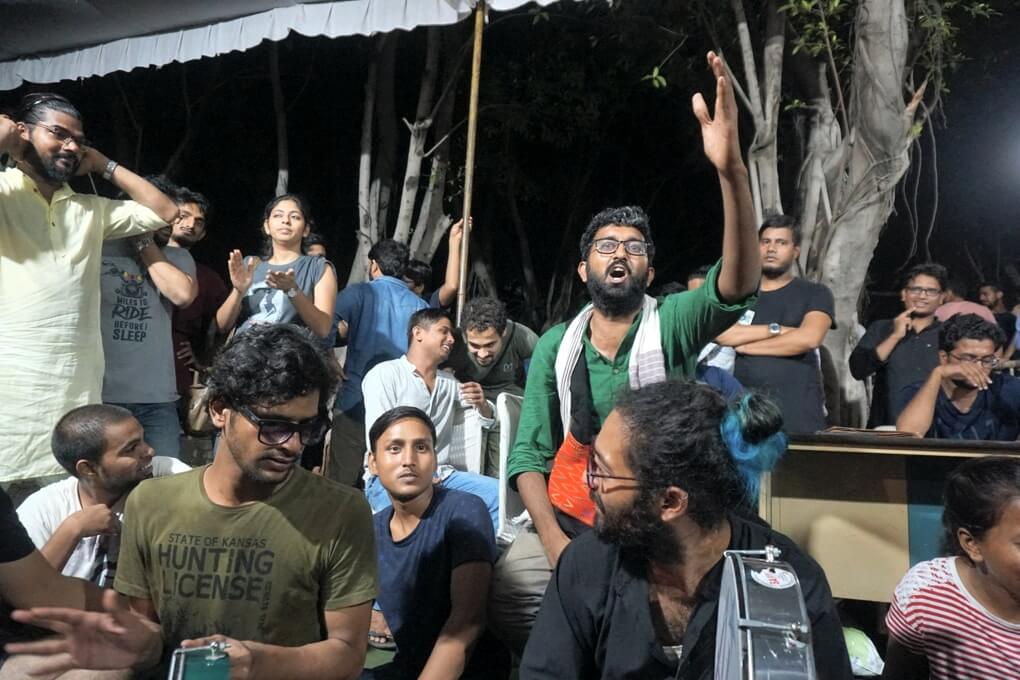 Our heartfelt thanks particularly to students of first year, whom ABVP specifically tried to lure with its money-muscle-mantri power, trying to detach them from JNU's brave culture of speaking truth to power. But they not only rejected the lies and hate of fascists but reposed faith in JNU and its struggle for truth! The students of Science Schools too have asserted against the reign of pressures and intimidation that sought to dictate their voting choices. They boldly stood up against the massive fund-cut and propagation of pseudo-science by the rulers of the day. Similarly students of Engineering and Management schools too have seen though the politics of betrayal of JNU admin and voted for the idea of JNU.

Friends, still tough times ahead, as VC and Akhil Bharatiya VC Parishad unleash their next scheme of attacks and manipulations to throttle your mandate, scuttle your elected JNUSU from getting declared. Let's stay united and determined in all the battles ahead. We thank all the members of the Election Committee who from day one resisted interference of JNU administration and performed their task with such dedication, determination and hard work. Administration, through the GRC, also tried their best to interfere in the counting process. Several threats and notices were issued to JNU EC, which the JNU EC collectively resisted and ensure JNU’s long standing tradition of free and fair election.  JNU EC handled the situation with remarkable resilience, just like last year when they faced wanton violence and intimidation. We salute their courage for conducting JNU student union election in spite of all threats and intimidations and holding high the glory of this unique institution of JNU's student union election process and JNU student movement. 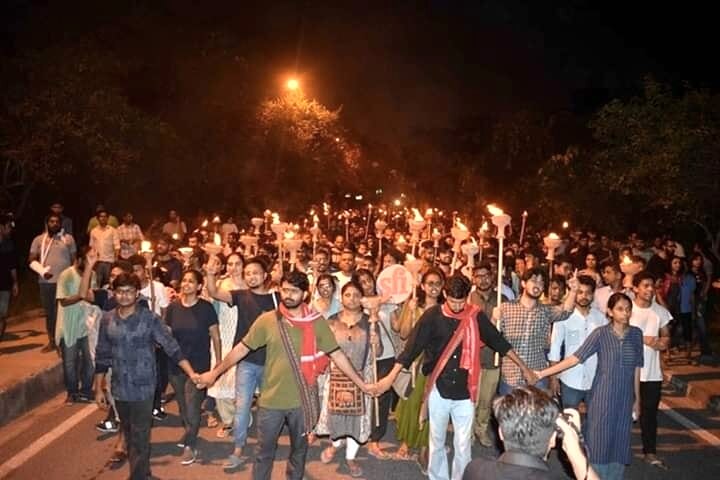