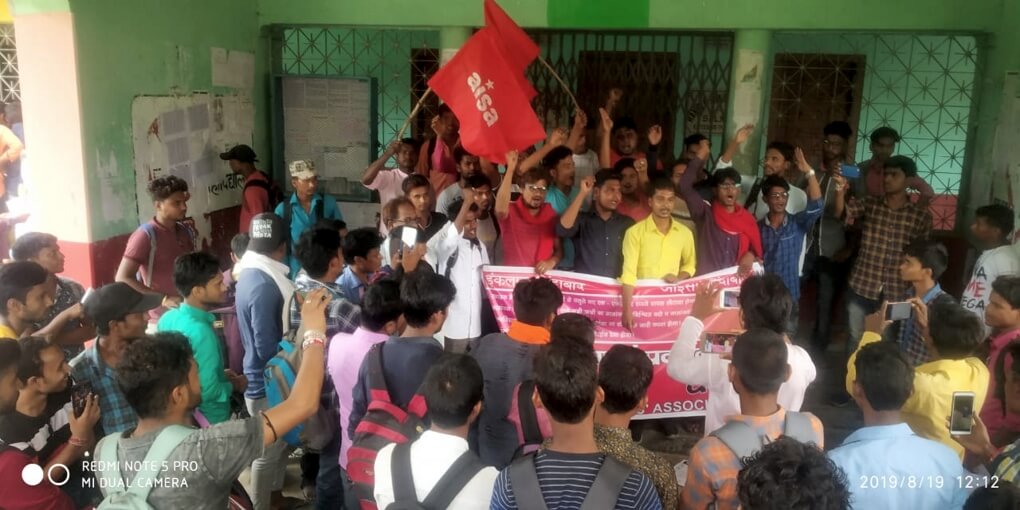 THE Purnea District unit of AISA organized a strong protest on the campus of the RDS College (part of Purnea University) at Salmari on 19 August 2019 against the arbitrary behavior of the University.

Addressing the protest meeting, AISA State Executive Council member and RDS College student Shahbaz Deedar said that during the Registration process for 2019-20 Part I, Purnea University has cunningly collected Rs 1000 per candidate through online applications. 60,000 students submitted applications for 42,000 seats. The University declared the names of 42,000 successful candidates and said that the remaining 18,000 candidates did not qualify for admission. However, very soon afterwards the University said that the remaining 18,000 candidates should take admission. It is ironical that Rs 1000 has been collected from each candidate but there is nobody accountable for this. We strongly oppose this arbitrariness and hope that Raj Bhavan will ask for answers on this issue from the Vice Chancellor of Purnea University. This is an indication of corruption on a large scale.

The main demands of the students are: the fee of Rs 1000 taken from each students should be returned immediately to the students; Post-Graduate admission should be ensured for all the aspiring students; a Notice should be issued giving the exact number of seats in all Colleges; clear directives/instruction booklet on the Registration process should be made available; B.A. Part 3 results of all students of BN Mandal College should be declared without delay.