Sit-in in Haldwani Against Rape of a Girl Child 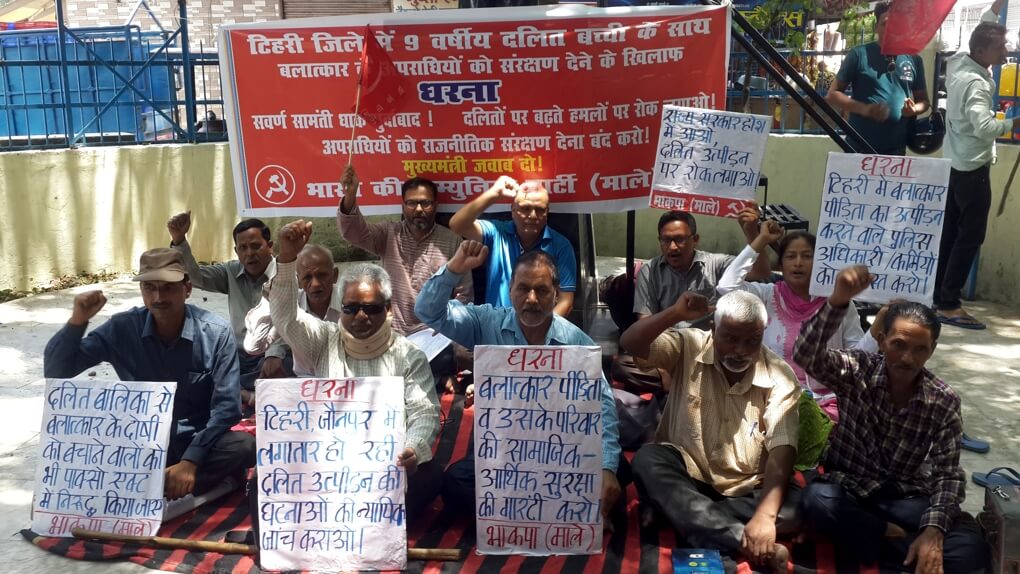 THE CPI(ML) organised a one-day dharna (sit-in) at Ambedkar Park in Haldwani on 7 June 2019 against the role of the dominant caste feudal forces in the Gram Panchayat, the Health Department, the police, administration, and the State government in the aftermath of the rape of a 9 year old minor Dalit girl in Tihri Janpad, Jaunpur, Uttarakhand.

Expressing grief and anger against the role of the local Panchayat, police-administration, Health Department, and State government after the rape of the 9 year old girl, CPI(ML) State Secretary Raja Bahuguna said the rape victim was discharged from the Dehradun hospital within 3 hours of being admitted, and then made to travel in the same jeep for hundreds of miles with the rapist. He said that the pressure put upon the victim by the feudal forces in the Gram Panchayat not to file a police report is a despicable example of the feudal domination in this region. He further said that this is the same area where some time ago a dalit youth was beaten to death by dominant forces from the dominant caste just because ‘he had the temerity to sit in a chair and have food at a marriage function’.

He also noted that the victim girl’s mother has stated that 4 years ago in this same village a dalit girl was raped and killed by dominant caste people and the entire matter was hushed up due to their influence. Raja Bahuguna said that the series of heinous incidents of oppression against dalits being perpetrated in this region is not possible without the political protection and patronage of the ruling dispensation.

At the conclusion of the dharna at Ambedkar Park, Haldwani a memorandum was sent to the State Chief Minister with the following demands: