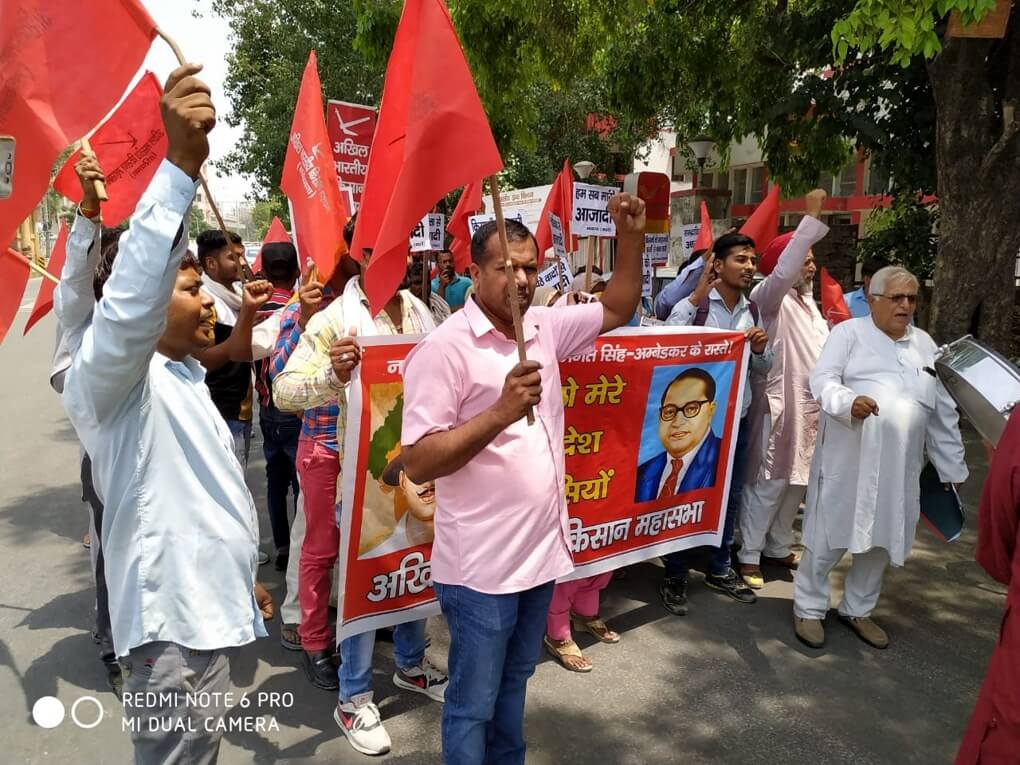 SAVE Agriculture, save farmers; oust rule of corporate loot! Loan waiver for all farmers including sharecroppers! Guarantee profitable crop purchase price as per Swaminathan Commission recommendations!

The All India Kisan Mahasabha organized a march in Karnal from Mahatma Gandhi Chowk to the mini Secretariat on 10 May 2019, the 161st anniversary of the fist freedom struggle in 1857 and the 10th Foundation Day of the AIKMS, to protest against the wrong policies of the government. The march was led by CPI(ML) Haryana in-charge and Kisan Mahasabha National Vice President Prem Singh Gehlawat.

Addressing the meeting, Prem Singh Gehlawat said that the condition of farmers and workers is extremely grave, resulting in the continuing succession of farmers’ suicides. They are unable to get back even the production cost as crop purchase price, obliging them to remain under the burden of debts to the government and to moneylenders. In order to hand agriculture over to corporate houses and multi-national companies, the BJP government is overtly as well as covertly making policies to favour them. However, farmers are not going to be cowed down, and their struggle is gaining in strength. They stand firm in their agitation across the country on their demand for a viable purchase price which is 1 ½ times the crop outlay price. Their demand is that the government purchase price should be fixed to include price of land, rent, domestic labour and other costs; otherwise farmers will be forced to bear heavy and unjust losses. Their demand is also that sharecroppers are given the legal status of farmers, and small farmers’ and sharecroppers’ government loans as well as moneylender-loans should be waived by the government. He also called for people to unite to defeat divisive hate-mongering and violence perpetrated by the BJP.

The following are the main demands of the Kisan Mahasabha protest on 10 May 2019: