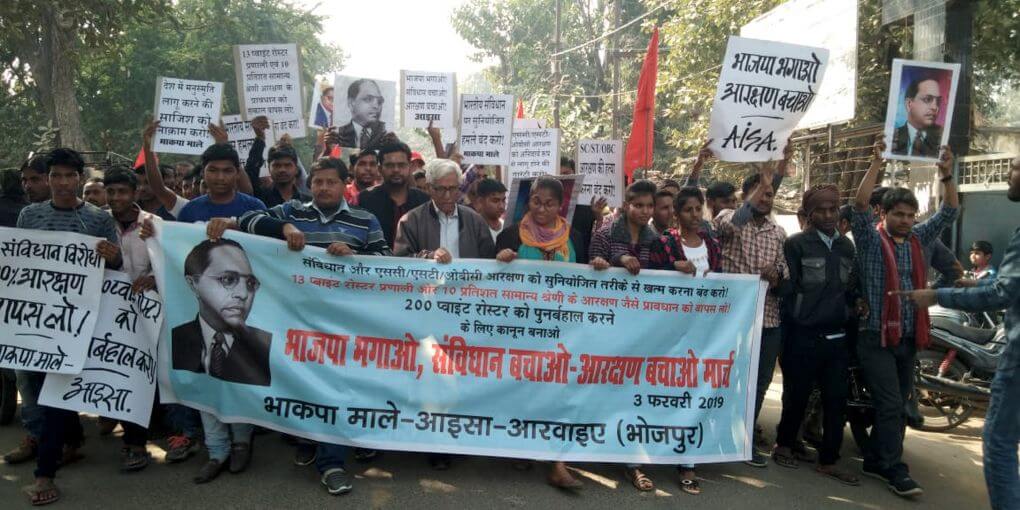 RESPONDING to a joint call by AISA and RYA, 29 January 2019 was observed as Protest Day against the Modi government’s incessant attempts to end reservation for SC/ST/OBC in education and employment. Thousands of students, youth, and AISA-RYA activists protested across the country, calling for acceleration of the struggle against the eviction of the ‘bahujan’ from educational institutions and the increasing attacks on the Constitution. The protests reverberated with slogans against the 13-pont roster system, 10% reservation for the general category, and the well-planned way in which SC/ST/OBC reservations are being finished. 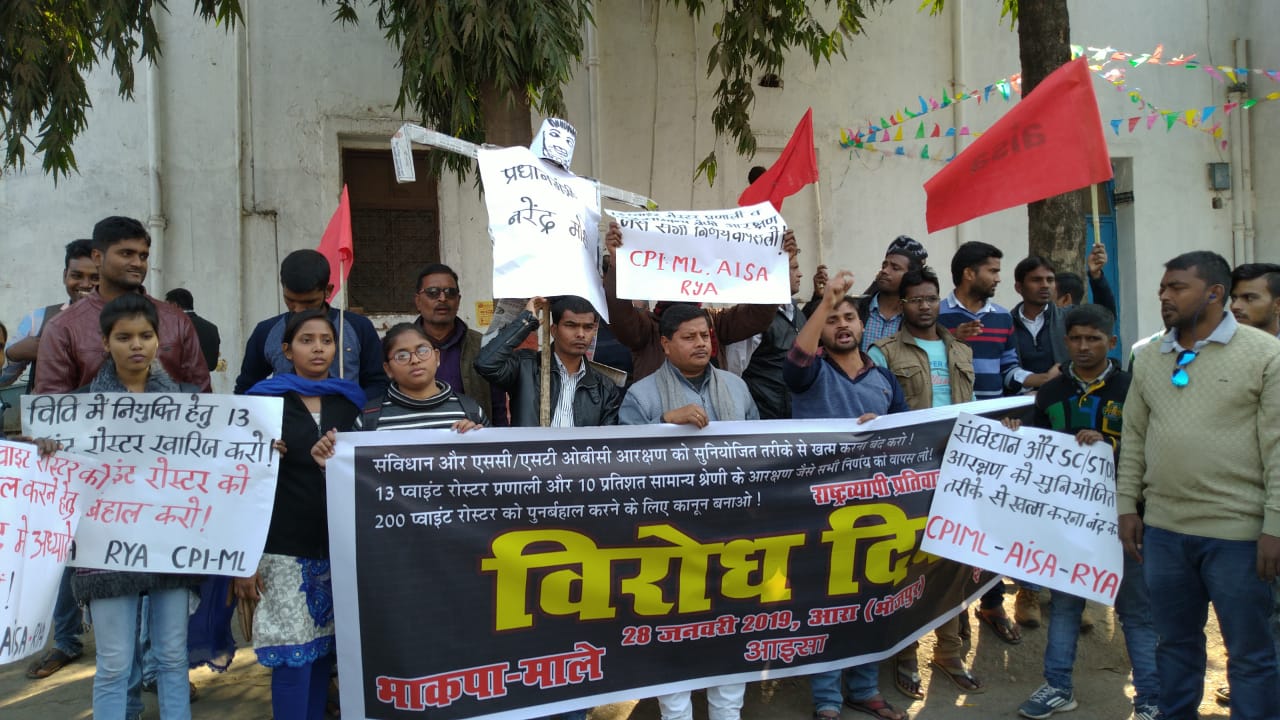 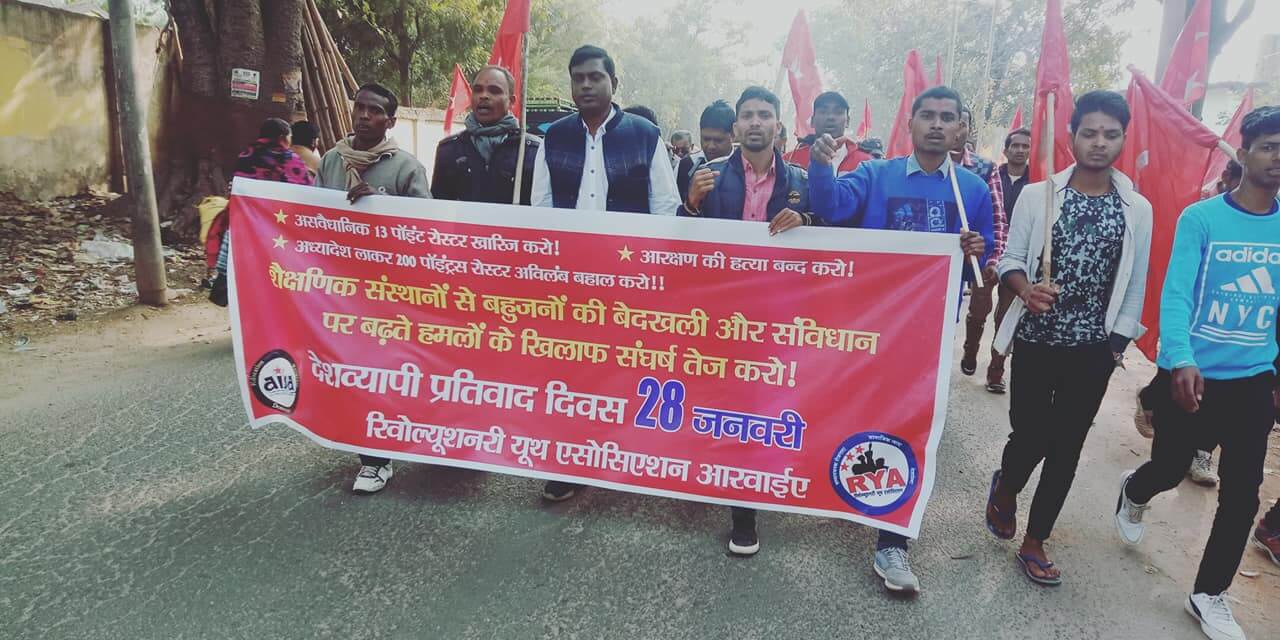 The CPI (ML) Uttar Pradesh State unit observed 31 January 2019 as statewide protest day in response to the national call given by the Party against decisions to weaken the Constitution, end SC/ST/OBC reservation in a well-planned way, implement the 13 point roster system and 10% reservation on an economic basis. 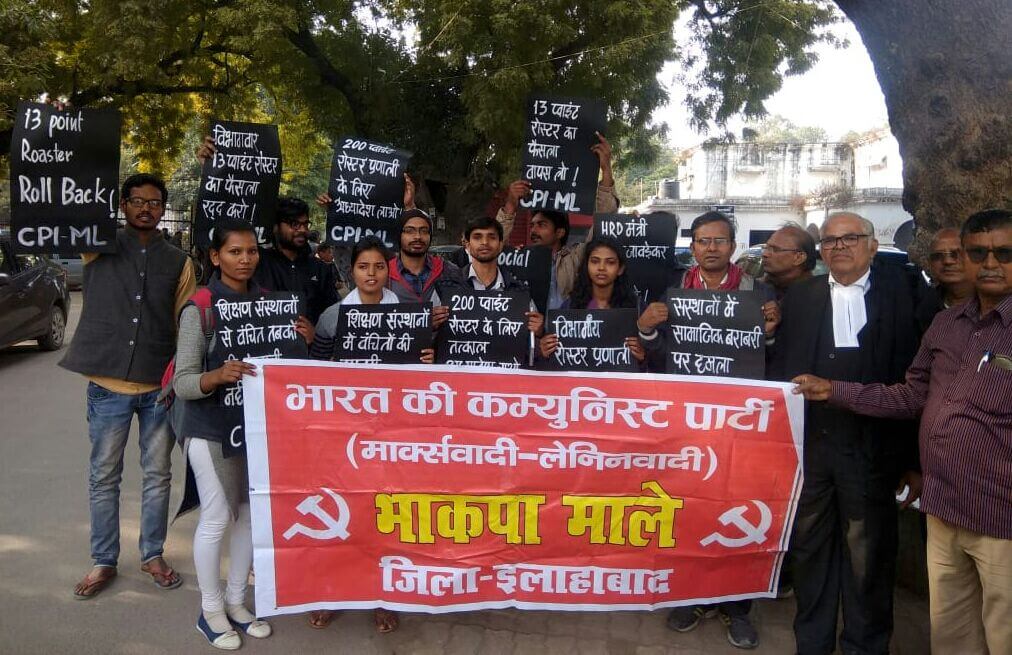 Strongly condemning the Modi government’s meddling with the Constitution, the speakers said that from the time of Independence till date, the participation of SC/ST/OBC in higher education institutions has been negligible. Whatever opportunities were there will also be completely finished by the 13 point roster system; therefore, it cannot be tolerated at any cost. They pointed out that the Modi government had promised 2 crore new jobs every year; but far from creating new jobs, 1.10 crore people have lost their livelihoods in a single year. To divert the anger of the youth, the Modi government has thrown out this new ‘jumla’ of 10% economic reservation. The dharna demanded that the Modi government enact a law to implement the 200 point roster system. The dharna also cautioned the government that if they do not do so, the people will teach them a sound lesson in the 2019 elections.

Activists from the CPI (ML) and people’s organizations took to the streets at Allahabad, Banaras, Gorakhpur, Ballia, Ghazipur, Azamgarh, Mau, Sonbhadra, Chandauli, Sitapur, Lakhimpur Kheeri, Jalaun and other Districts and attacked the Modi government’s ploys to render meaningless the reservation provided by the Constitution. After the protest marches and dharnas held at District HQs, a memorandums addressed to the president were submitted, demanding a law to reinstate the of the 200 point roster system. 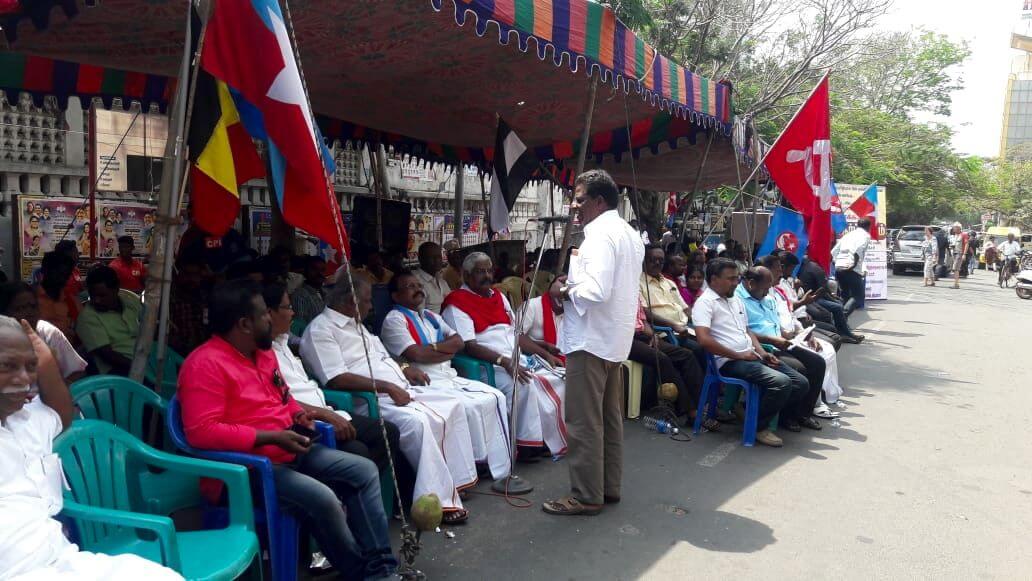 In Puducherry on 5th February a joint protest was organised against 10% reservation to EWS and 13-point roaster by CPI(ML), CPI, DMK, VCK, DK and other social organizations in front of Head Post Office Puducherry. Balasubramanian State Secretary CPI(ML) addressed this protest.