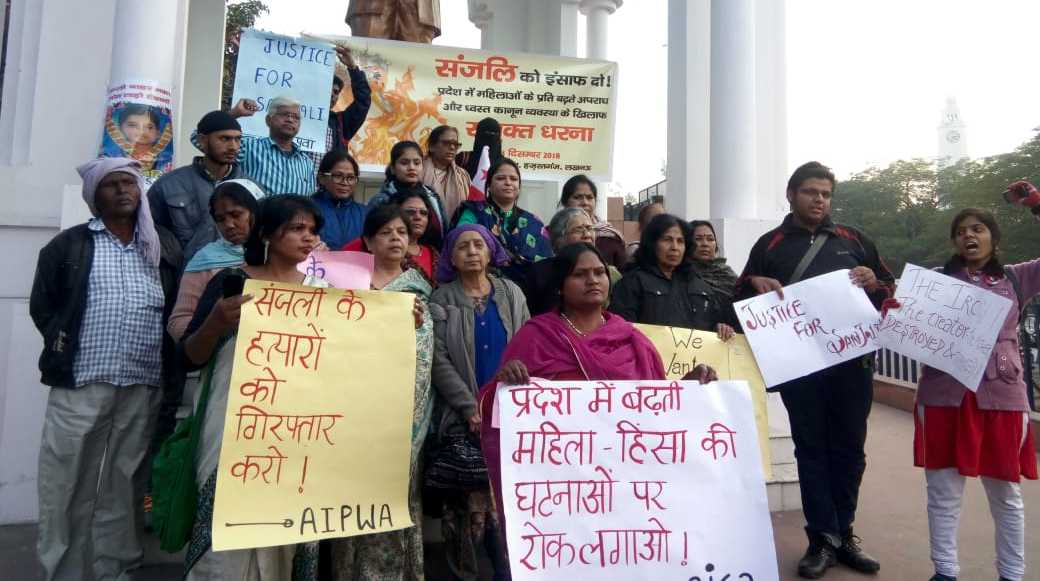 AISA and RYA have called for state wide protests in UP against brutal burning and murder of Sanjali in Agra. Protests were held in many places against this heinous crime demanding resignation of Yogi Adityanath under whose tenure attacks on women and Dalits have increased manifold.

In Allahabad AISA activists held out a protest march on Dec 22 and organised a mass meeting in front of Students Union Hall. Protesters raised slogans and demanded to ensure fearless freedom for women in the state. AISA leader Sakshi Upadhyay said that law and order situation has totally collapsed where killers and rapists are getting full impunity from the state resulting in increased morale of criminals under Yogi Raj. Nilam Saroj said that Yogi’s anti-Romeo squads are there for protecting patriarchal anti-women values, while girls and students live under fear of attacks in broad daylight. This is nothing but a rule by goondas.

AISA state secretary Sunil Maurya held Yogi government responsible for the killing of Sanjali in Agra, which he said in not a lone incident but in continuation of a trend which has been seen in the kidnapping of two brothers and killing of one of them in Sultanpur, and gangrape of a girl in Allahabad region who was later killed along with her younger brother. There is no law and order under Yogi rule and he must in the good interest of the people of UP resign immediately, he said.

Revolutionary Youth Association and AISA protested in Bagodar, Jharkhand on 23 Dec and held out a candle march against this brutality in Agra. RYA Secretary Sandeep Jaiswal addressed the protesters and expressed concern and need for strong movement against rising attacks on girls in BJP ruled states.