Farmers from Across the Country Join the Kisan Mukti March 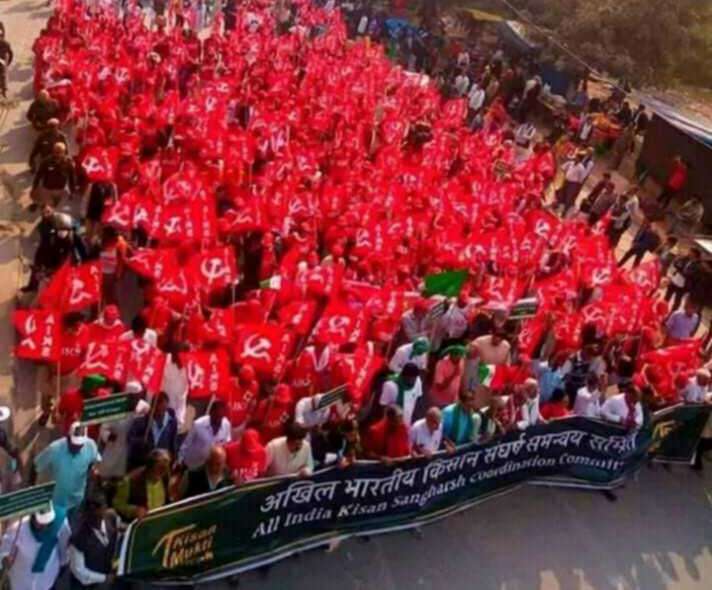 TENS of thousands of farmers from all over the country converged in Delhi on 29 November 2018 to issue a warning to the Modi government that they would not allow real issues like the agrarian crisis and farmers’ distress to be diverted by conspiracies to divide the people by inflaming communal passions. The farmers’ march had one main objective: that a special session of Parliament should be convened just to discuss the agrarian crisis and ways of resolving it. Last year the All India Kisan Coordination Committee (AIKCC) had drafted 2 Bills at the Farmers’ Parliament (Kisan Sansad) and sent them to Parliament for passing. Loan waivers and MSP were the main issues, and other demands include: stop handing over agriculture to crony capitalists, causing farmers to commit suicide; farmers’ insurance and farmers’ credit card have become a joke and need to be rectified; Swaminathan Commission recommendations must be implemented, including purchase price at 1 ½ times the crop production cost (C+2). Also, privatization of farming must be ended.

The Kisan Mukti March was organized at the call of the All India Kisan Sangharsh Samanvay Samiti (AIKSCC). 210 farmers’ organizations participated in the march, including the All India Kisan Mahasabha, All India Kisan Sabha, and the Swaraj Abhiyan. Farmers from across the country arrived in Delhi and marched to the Ramlila grounds from different railway stations. Thousands of citizens in Delhi came out in support of the march and helped in providing food and accommodation for the farmers. 5 groups of farmers marched to the Ramlila grounds from different directions in Delhi. The farmers were diverse in region and language, but unitd in what they had to say: The Modi government has destroyed the agrarian sector, and the only way to save farmers and agriculture now is to throw out this anti-farmer government. 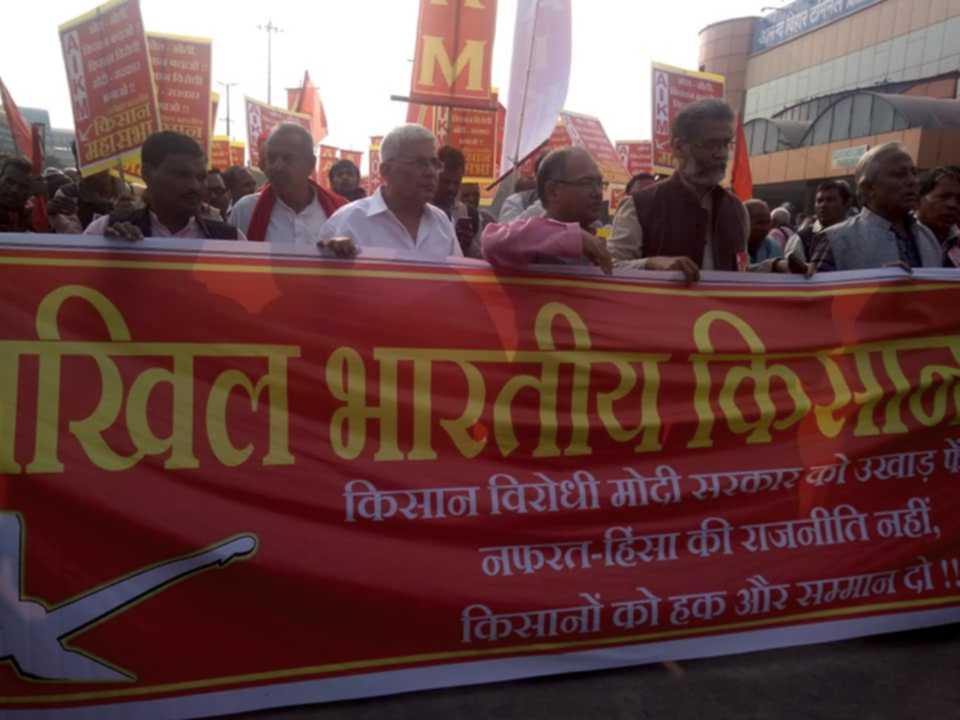 Speaking at the Kisan Mukti March, CPI(ML) General Secretary Dipankar Bhattacharya and other organizational leaders said that during the 2014 election the Modi government had promised compete loan waivers and implementation of the Swaminathan Commission recommendations including 1 ½ times MSP, but they turned out to be empty words and none of the promises have been fulfilled. On the one hand, rich corporate magnates are being facilitated to run away abroad with lakhs of crores of taxpayers’ money, while farmers are being deprived of their rights, forcing them to commit suicide. Demonetization and GST have destroyed the lives and livelihoods of the poor while the rich capitalists and the BJP have laundered their black money and become richer. Statistics tell us that more than 50,000 farmers have committed suicide during the Modi regime, whereas statistics for the past 2 years have not even been released. Starvation deaths are on the rise, especially in Jharkhand, Chhattisgarh and even in Delhi, and yet the Modi government is bent on ending the Public Distribution System (PDS). Many States including Maharashtra, Bihar, Jharkhand and Uttar Pradesh are struggling with drought conditions, but the government is not lifting a finger to bring relief. Lands of farmers, Adivasis and the poor are being forcibly acquired in the name of Bullet Train, Eastern Front Corridor, Western Front Corridor, GAIL gas pipe line, national highways and industrial corridors, but they are getting neither just compensation nor rehabilitation. Sharecroppers are not being given the ‘farmer’ status, thus depriving them of all benefits. MNREGA is almost at a standstill and instead of giving land to the landless, the poor who have been settled on land for years are being evicted.

The Kisan leaders said that the Modi government as well as BJP State governments have betrayed the farmers with false promises and increased their distress manifold. Farmers will not allow the issue of agrarian crisis and farmers’ distress to be diverted by communal conspiracies to incite hatred and violence and divide the people. The farmers of the country have made up their minds to teach the Modi government a lesson by throwing them out in the 2019 Lok Sabha elections.

Civil Society and Opposition Parties Come out in Support

On the morning on 30 November, the farmers started arriving at the Ramlila grounds. Various cultural teams sang in solidarity with the farmers. One big attraction was the songs by Bhojpur people’s poet Krishnakant Nirmohi. As soon as he began singing revolutionary songs at the Kisan Mahasabha counter, farmers as well as media-persons leapt in that direction. From 9 am farmers started lining up behind their organizations with their posters, flags, banners and placards. Red flags were prominent in the march, and along with green, yellow, blue, white and other coloured flags the long lines of farmers gave the appearance of a veritable rainbow. At 10.30 am the farmers’ rally came out on the road from the Ramlila grounds and began their march. The road was filled on both sides with farmers. The spirit and enthusiasm of the farmers during this 3 km march was remarkable. In continuity with the movement which has been going on for the past two years, this was the fourth huge 2-day farmers’ march at the call of the All India Kisan Sangharsh Samanvay Samiti (AIKSCC). 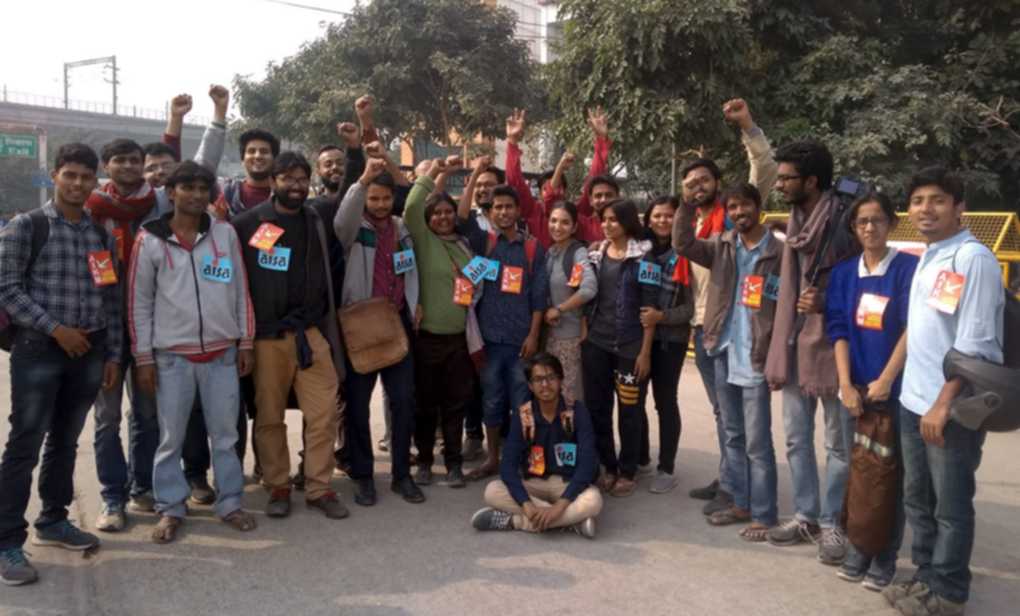 On reaching Parliament Street the march was turned into a public meeting. The entire Parliament Street was covered with farmers. The first session of the meeting was fixed for speeches by kisan leaders and was addressed by all prominent leaders associated with the AIKSCC. Addressing the session, senior journalist P Sainath (who played an important role in enlisting the support of civil society for the farmers’ struggle) and Veteran Soldiers Association President Satbir Singh, pledged to march shoulder to shoulder with the farmers in their struggle.

All the farmers pledged to stand united in their fight against the Modi government’s betrayal and cheating of farmers. They said that they would give a befitting reply in the 2019 elections by throwing out this anti-farmer government and sending the maximum number of pro-farmer MPs to Parliament, so that the government would always be under pressure from the farmers’ and workers’ struggles. Kisan Mahasabha General Secretary Rajaram Singh said that the fight for loan waiver and 1 ½ times MSP started by us must now be extended to Food Security and PDS so that no more Santoshis die of starvation. He said that while the population is growing, agricultural land is constantly being brought under acquisition; the Modi government has failed on all fronts and cannot show a single achievement for their 5 years in power. Now they want to raise the Ram Mandir issue again and spread communal venom and divisiveness in order to divert the real issues. But farmers have resolved to give a fitting reply to the BJP’s divisive politics. The Kairana bye-election result is a shining example of this resolve. 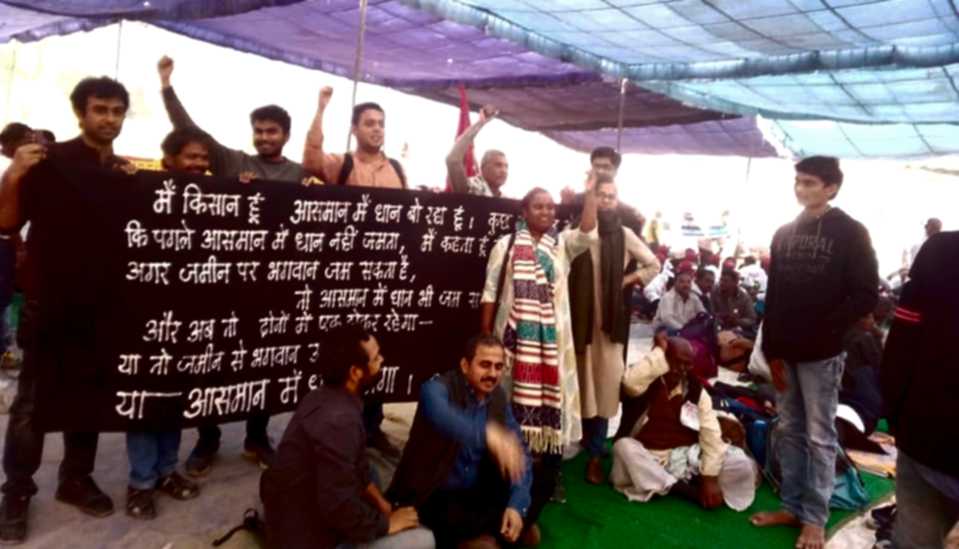 The second session of the meeting was fixed for political parties which supported the 2 Bills drafted by the AIKSCC and already introduced in Parliament as private Bills: the Farmers’ Freedom from Debt Bill and the Remunerative Prices Bill. The AIKSCC had invited all parties and their leaders to enlist their support for these Bills. CPI(ML) General Secretary Dipankar Bhattacharya was the first to support these Bills at the meeting. The meeting was also addressed by leaders from many Opposition parties including CPM General Secretary Sitaram Yechury, J&K former CM Farooq Abdullah, Delhi CM Arvind Kejriwal, Indian National Congress President Rahul Gandhi, NCP leader Sharad Pawar, RJP National President Sharad Yadav, CPI leader D Raja, AAP leader Sanjay Singh, Samajwadi Party MP Dharmendra Yadav, and TDP MP K Ravindra Kumar. All these leaders assured the farmers that they would include passing of these Bills and all other farmers’ demands in their forthcoming election manifestos.