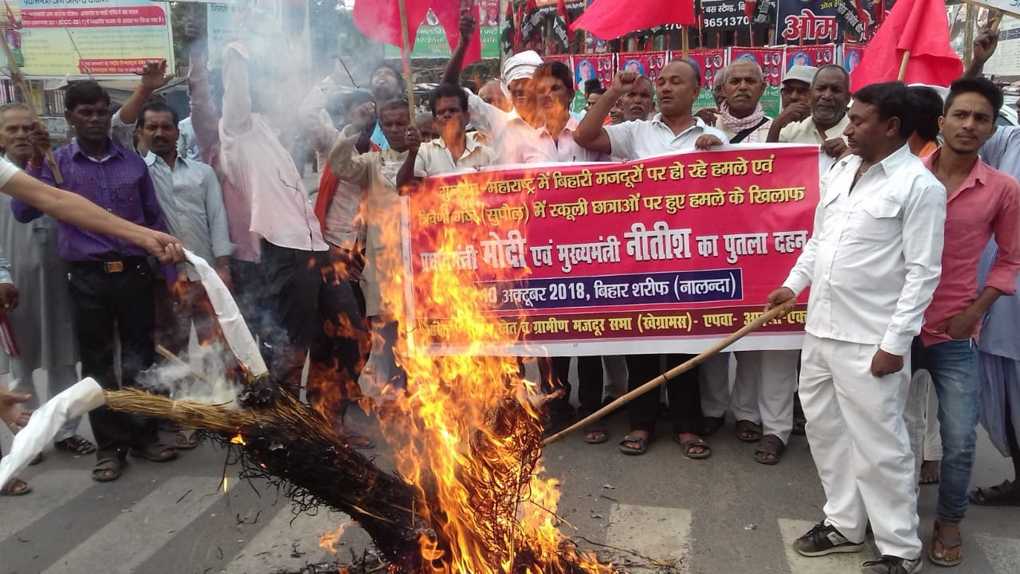 IN the last few days, thousands of migrant workers from Bihar, Uttar Pradesh and Madhya Pradesh have been venomously targeted as “outsiders” and brutally attacked in the Prime Minister Narendra Modi’s home state Gujarat. Migrants are being targeted and beaten with sticks and stone, and hate messages are being circulated on social media after a migrant from Bihar was arrested for allegedly raping a minor in Sabarkantha district, Gujarat on September 28. Several districts in Gujarat have been affected by this massive violence - Sabarkantha, Patan, Mehsana, Gandhinagar and Aravalli.

When faced with questions about mass exodus from Gujarat, the state police and the saffron brigade shamelessly replied that people fleeing are simply leaving for home for festivals like Diwali and Chhath! Nothing can be more absurd than this: there is still a month to go for these festivals, and migrant workers generally leave for home just a few days in advance. Further, the same Gujarat police claims to have arrested 342 people from various parts of the state for attacking non-Gujaratis. Why they are forced to arrest so many people if everything is alright in Gujarat?

What is worse, UP CM Yogi Adityanath audaciously trivialised these violent attacks as mere rumours by those who are jealous of Gujarat’s “development”! Is he the Chief Minister of UP or the publicist of Modi’s so-called “Gujarat Model”? BJP Governments of Bihar and UP as well as of Gujarat are all complicit in leaving migrant workers to the mercy of the hate-filled mobs.

In fact, the attacks expose the reality of the so-called ‘Gujarat Model’ of development, which Narendra Modi had touted in 2014 in his bid to become Prime Minister. H.D. Mewada, the deputy superintendent of police in Waghodia district, Gujarat has accepted the fact that the entire hate campaign was orchestrated exploiting the sentiment that workers from “outside” were taking away job opportunities of Gujaratis. Modi’s “Gujarat model” has miserably failed to generate dignified employment for the local youth in the state.

But the anger, instead of being directed towards the abysmal failure of the Government, was calculatedly and deviously channelized towards migrant workers. And this is not happening for the first time in Gujarat. To divert attention from burning issues like agrarian distress and massive unemployment, the RSS and BJP time and again stoke hatred and violence against “outsiders” and “others” – religious minorities (2002 riots), Dalits (as in the Una flogging) and this time, migrant workers. It is condemnable that a Congress MLA of Gujarat has also been heard giving speeches stoking prejudice against migrant workers - though he has changed his tune since the violence evoked countrywide condemnation and outrage.

It is crystal clear now that the ruling regime has absolutely failed in all fronts – from tackling farm distress to the prices of petrol-diesel, from education to generating employment. Now to divert attention from these issues, the saffron brigade is desperate to create a new enemy everyday to whip up prejudice and divisive hate: “anti-national”, “half Maoist”, “urban Naxal”, “Bangladeshi infiltrators,” “termites” and the list goes on! This fascist regime, to hide their monumental failures has a very clear motto: “divide, divert and rule”. The very politics of the Sangh brigade is dependent on manufacturing the idea of “outsider”/ “infiltrator”/ “other”.

But we must fight back this hate politics. We must uphold the dignity and human rights of all, and must resist every attempt to treat our own people as aliens in their own land. We must insist on dignified conduct towards immigrants and refugees as well.